The owners preserved the original staircase and oak floors in their open-plan living/dining room.

BEFORE: The existing entry was cramped and uninviting.

BEFORE: Walls were removed in the original floor plan to create an open layout. 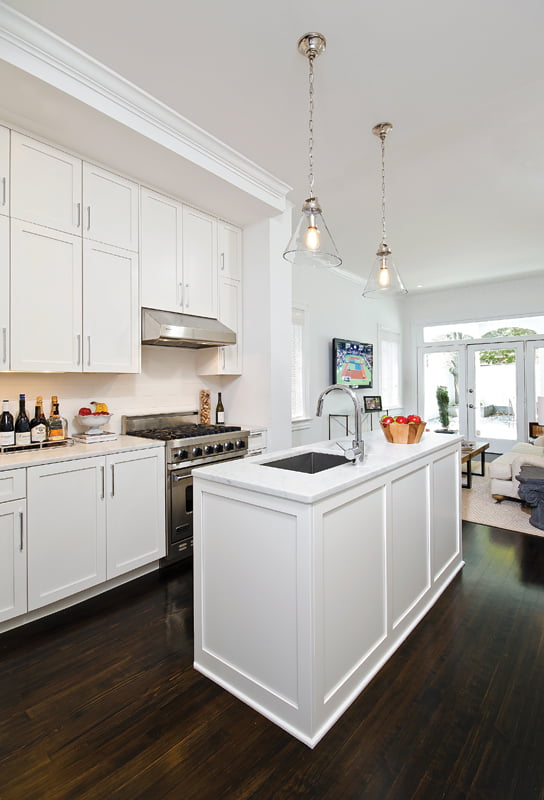 A marble-topped island bisects the room to create a passage to the family room, beyond which the patio is visible.

BEFORE: The previous kitchen was dated and closed off from the family room.

A Sense of History

A Sense of History For some, the allure of living in an older home outweighs the inconveniences—and the prospect of bringing a house into the 21st century while safeguarding its historic character is an exciting one.

This was the case for Kelly Childress and Parker Lange, who put a premium on the charm and a sense of history but definitely wanted a convenient, modern abode that fit their shared style and vision.

After several years in a Dupont Circle apartment, the couple was ready to buy a house. Their list of requirements was short but unshakable: It had to be old, with high ceilings and three bedrooms, including one for their toddler and one for baby number two, already on the way when they finally found the house they wanted.

“We looked for three years,” recalls Lange, a commercial real estate broker. “We really wanted to be in Old Town Alexandria but we’d started to think we might not find what we wanted until we saw this house.”

It was a 1902 brick row house on a quintessentially Old Town street of historic buildings, just a short walk from the area’s shops and restaurants. “I walked in and knew right away,” says Childress, a consultant. “It checked off all our requirements.”

That’s not to say it was in move-in condition. Although the ceilings were 10 feet tall on the ground floor and nine upstairs, the layout was choppy, with cramped rooms in a narrow footprint. A 1980s addition at the back contained a dark, dated kitchen and separate family room.

Because the previous owners’ taste veered towards ornate Victorian, the place was crammed with heavy furniture and gilt-framed art when the couple first saw it. Luckily, Childress had a clear vision of what she wanted. The house was barely theirs before she and Lange tapped Michael Sauri of the design/build firm TriVistaUSA for a job she describes as “taking the house apart and putting it back with all the original details intact.”

As Sauri recalls, “Kelly wanted to keep the old architectural elements in the house but with a clean, modern palette.” He and his team devised a new floor plan that would divide the downstairs into two open spaces: living/dining room at the front, and kitchen/family room at the back.

“We liked the idea of being able to see all the way from the front door to the backyard,” says Lange.

When they began removing walls to create the open plan, however, they soon uncovered problems that weren’t initially apparent. “They thought they’d bought a structurally sound house,” Sauri says. “This was not the case. We spent the first few months addressing structural failures before we could proceed.” Ultimately, the electrical and plumbing systems had to be replaced, and glaring issues such as broken or missing joists under the floorboards had to be remedied.

In the original layout, a narrow entry hall led from the front door back to the kitchen, with a staircase to the right and doors on the left opening to small public rooms. The TriVistaUSA team removed the load-bearing wall separating the hall from the other rooms, then took out the wall between the rooms, shoring up the ceiling with metal beams. Period design elements—including crown and baseboard moldings, a carved fireplace surround and the original, narrow staircase—were painstakingly preserved. They also retained the original oak floors, which were patched where necessary and stained dark.

The dated kitchen was lined with dark wood cabinets; visitors had to walk through it to get to the family room. Sauri removed the wall separating the two spaces, relocated the kitchen cabinetry to one side and installed a center island. A bonus: The removal of the cabinetry exposed an intact wall of brick; now painted white, it adds character to space.

The family room opens to the enclosed backyard. Once covered in ivy, it’s now a spare courtyard with a slate-tile floor where the kids can play.

Upstairs, the comfortable master suite was reconfigured to accommodate a 12-foot-long closet for Childress and a small but functional bath. The kids’ bedrooms received facelifts that reflect the home’s fresh new style.

Childress tapped Alexandria designer Stuart Nordin of Stuart Nordin Design for help sourcing furniture and lighting. The resulting aesthetic is clean-lined and crisp, with transitional furnishings that are both elegant and comfortable. A palette of whites and subtle hints of neutral color reflects the light. New oak floors in the renovated parts of the house are stained dark to match the original floors, creating a sense of continuity.

The completed house is just what the couple wanted. “We accept the limits a narrow house gives you,” observes Lange. “In fact, we embrace them. We expect to be here for a long time.”