In the sunken living room, sofas by Donghia and a marble fireplace surround reflect a lighter, pared-down style.

The backyard is visible through French doors opening to the patio.

Kaller Fine Arts supplied art for the foyer, which houses a contemporary console by Century. 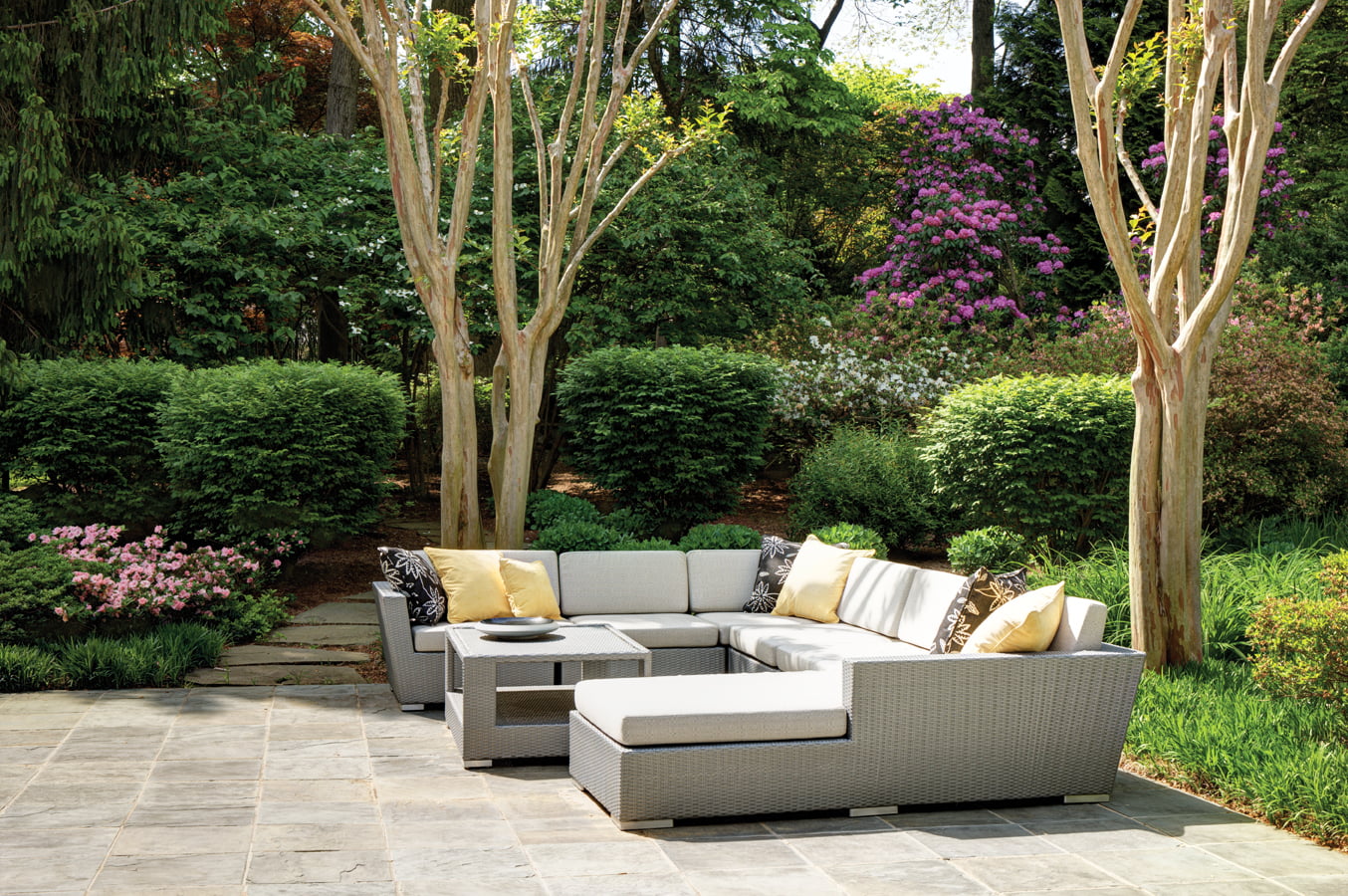 The kitchen opens to the breakfast area.

The breakfast area is surrounded by walls of windows on three sides.

A grouping of patio furniture is by JANUS et Cie.

In the dining room, the custom table is by Evanson Studios and the chairs are by David Edward.

Full Circle Andrew Marks and his wife, Susan Esserman, had their eye on the future when they started looking for a new house. They loved their Bethesda neighborhood, but unlike most empty nesters, wanted to upgrade rather than downsize.

“It was a great kids’ house,” Esserman says of the home where they spent 22 years raising three sons, now 23, 27 and 30. “But it wasn’t a house they could come back to as adults with spouses and children.”

Both prominent Washington attorneys, Marks, and Esserman had spent some time looking at properties without much luck—until one evening Marks saw a for-sale sign in their neighborhood; the house was set so far back, he’d never noticed it even though they’d lived less than a half-mile away. Upon further investigation, he says, “I was struck immediately by the setting—it was extraordinary.” They made an offer and the house was theirs.

Built in the 1940s, their new Bethesda home is set on 1.75 acres—a wooded landscape exploding with azalea, rhododendron, hydrangea, roses and all manner of meticulously landscaped plantings and flowering trees. “The natural forest setting and beautiful landscape are what drew us,” Esserman says. But they needed more convincing about the house itself.

“The whole place looked like a funeral home,” recalls Washington designer Susan Vallon, who consulted with the couple before they bought the house. She had decorated their three previous homes and understood their needs. Despite its drawbacks, Vallon saw potential and advised them to purchase it.

“Susan’s imagination and vision helped us see how we could change the inside, which was really not us at all,” Esserman explains, noting that she and Marks had trouble seeing beyond the black marble fireplaces in three public rooms, the dark and dated cabinetry in the kitchen and the mustard-yellow walls in the family room—all the result of a previous renovation.

As she set out to revamp the house to suit her clients’ style, Vallon’s overall plan incorporated neutral grays and clean-lined furnishings that would not compete with the outdoor views. She also lightened the mood by replacing dark fireplace surrounds with white marble and installing recessed lighting throughout. It’s a vibe that is more modern than the couple’s previous homes. “There’s a serenity to a more streamlined look,” the designer comments.

“We were ready for something more contemporary,” Esserman agrees, “but it also seemed to fit the house.”

Though neutrals prevail, Vallon packed a colorful punch in the living room, where she chose a carpet by Rug Art International with profusions of purple. “I saw it in a magazine, cut it out and said, ‘Somebody needs this rug!’” she recalls.

Marks and Esserman were happy to be the recipients. “It defines the room, and also what we put in it,” Esserman says, pointing out the glass-top coffee table, textured silver vessels and abstract art. The grand piano, too, is a fittingly dramatic complement.

Early on, Vallon proposed switching the home’s original dining and family rooms. The domed ceiling in the family room, for instance, works much better over a dining table. And the space that had served as the dining room could accommodate a large sectional, bookcases and a television better than the existing family room. “I was able to get an ocean of seating in there,” Vallon says.

The designer also gutted the kitchen, installing pale Tiger’s Eye maple cabinetry and milky granite counters. She cleared away several above-counter cabinets, consolidating them into a custom armoire for more efficient storage. The brighter, more open plan takes better advantage of the light coming in from the breakfast area, which is surrounded by three walls of windows overlooking the patio and gardens beyond. “I’ve always called this an inside-outside house,” reflects Esserman on how her new home engages with the landscape.

The house now functions as the owners envisioned. The property is ready to welcome their sons, eventually with future spouses and children. And it’s also the perfect venue for the political, business and charitable events that the couple frequently hosts.

To make the home function better for guests, Vallon transformed a study and coat closet on the main level into a guest suite; the lower level accommodates additional guests. She also converted the second bedroom upstairs into a study where both Marks and Esserman can work at home.

As for entertaining, Vallon found a dining table that’s casual enough for the family and expands to seat 18. She also ripped out the room’s existing dark shelving to make way for pale gray built-in sideboards The new dining room arrangement is perfect for much larger receptions, which easily spill out to the rear patio and deck—a space that needed no improvement beyond Vallon’s well-chosen outdoor furniture.

Vallon, who’s known her clients since their sons were babies, figures that her work with them has come full circle. “I knew their last house was going to be the big family house,” she concludes. “They really want everyone to come back.”

Writer Jennifer Sergent is based in Arlington, Virginia. Gordon Beall is a Bethesda, Maryland, photographer.