The lodge-style house and its garage are perched on a steep mountainside.

Words by Buddha were inscribed on a plaque in the gathering room.

A dry-stacked stone fireplace lends a rustic feel in the gathering room.

Metal shelves flank the doorway to the dining room.

The family room is furnished with a sectional and a swivel-top coffee table.

Swatchroom fabricated and finished the entry wall made of recycled barnboards.

In the billiard room, Swatchroom created the 3D walls and fashioned stools from tractor seats.

A mural of an Aspen slope by Swatchroom provides the backdrop to an actual ski-lift chair.

Faux snowboards adorn the ceiling of the play room.

Peake reupholstered the headboard of a guest room bed.

The master bedroom has a masculine vibe. 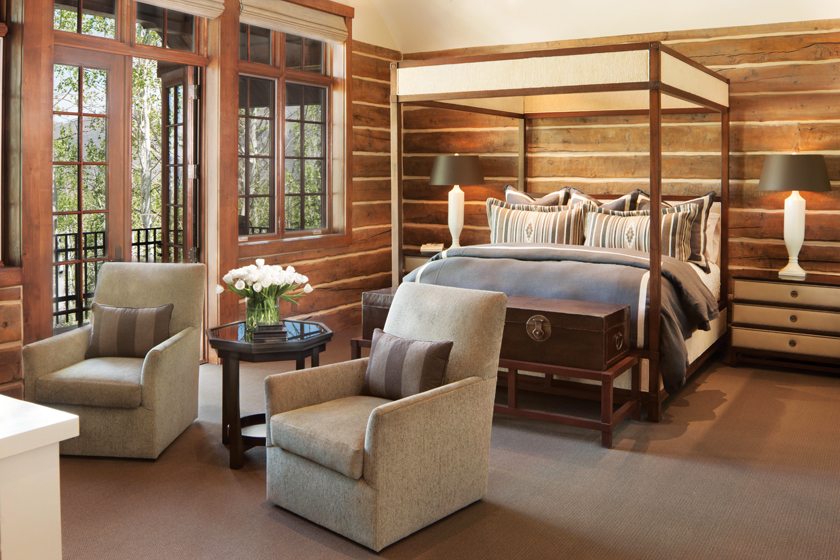 A guest suite boasts a large balcony overlooking the mountains.

Rocky Mountain High Designer Kristin Peake experienced Colorado for the first time when she descended in a small plane into mile-and-a-half-high Aspen. Its eponymous poplar trees quaked golden in the October sunshine, and the surrounding Rockies loomed snow-dusted against a deep blue sky. “It took my breath away,” Peake recalls. “Aspen is majestic.” Though she doesn’t ski, she nevertheless imagined a skier’s rush on a run down the mountain.

She was en route to the vacation home of her client, the CEO of a Virginia investment management firm, to brainstorm the redesign of its interiors, and she was thrilled. “The house was built in 2005 in the indigenous lodge style and decorated by the owner’s former wife,” Peake says. “Its bones and its lot were magnificent, but nearly a decade later, the furnishings and finishes weren’t up to snuff.” The designer had previously reinvented the interiors of this client’s Virginia home—a major project initiated after a whirlwind collaboration with his children to redecorate their own bedrooms.

“Everything you’ve done wows me,” the delighted father proclaimed when he saw the fruits of her creative efforts. He then asked Peake to lend her style and vision to his Colorado home “and make it new, too.”

The owner had requested that she stick to a few parameters—but no budget—while exploring ideas to transform the vacation house. “He wanted me to use his collection of rugs and tap into local Aspen art and craftwork,” Peake relates. “The rooms had to function for the year-round vacations he spends there with his children and his friends, as well as for entertaining on any occasion.”

The designer was relentless in her weeklong exploration. She noted how the existing furniture plans were oriented to the views; slept in three bedrooms to assess their levels of comfort; and critiqued the practical flow of the home’s two main levels.

Overall, she decided she needed to imbue the house with more of the remarkable aura of Aspen. “I took hikes every day to enjoy the beauty and filled a legal pad with notes about the house,” Peake recalls. “I knew, bottom line, that the spaces had to breathe—like the great outdoors.”

With its perch on a steep mountainside, the back of the house opens to magnificent views on the first floor and lower level. The walk-in ground floor houses the main living areas, the billiard room, and a guest suite, while the lower level contains four bedrooms and informal lounging areas. Working within the existing floor plan, Peake maximized the rooms’ airy exposures, mostly limiting her changes to the cosmetic. “Ideally, I would have renovated the kitchen and all the bathrooms,” she says, “but getting permits for renovation in Aspen, especially during the ski season, would have been too time-consuming.” The one exception was the powder room, which Peake revamped with a poured-concrete countertop and custom vanity.

She began the 12-week transformation in March 2014, following the winter ski season, first by initiating fresh finishes. The lodge-style oak plank walls throughout the house, which had turned orange from years of oxidation, were restored and stabilized in their original brown hue by  DC-based Swatch Room, whose artisans flew to Aspen to work on this and many other aspects of the project, from re-facing the kitchen cabinets to fabricating custom lighting, furniture and architectural elements.

Throughout the home, a few industrial materials were added to play off the pervasive rusticity: a flashy corrugated-metal ceiling reflects light in the foyer and metal étagères provide an alternative to solid furniture against wood walls. Peake based her color scheme on the dominant shades in the client’s rug collection, staying neutral to avoid competition with the serene views. She pored over thousands of potential fabric swatches in her Maryland studio for upholstery choices and shipped a selection to Colorado to determine what would work with the rugs.

Once she’d finished the basics, Peake indulged a few of the creative touches her client loves. She worked with a Maryland artisan to design one-of-a-kind ceiling-light fixtures from old tractor parts, and bar stools from tractor seats. Rather than displaying artwork in empty passageways, she affixed it to floor-to-ceiling reclaimed barn wood boards, overlapped for texture. In the billiard room, she created an industrial-looking ledge of hammered metal to hold three heavy works of art; it looked so good she repeated the ledge at regular intervals for a corrugated effect on every wall of the room.

But Peake’s most inspired move was hanging a ski-lift chair in the stairwell. The day she led the owner through the finished house, the chair seemed to emerge from a blown-up photograph of a mountain lift scene behind it. He was totally wowed. And Peake had gone a step further: The mountain in the photo is Highland Bowl, the peak on which the house is located. It was the final touch for the home of avid skiers—and the perfect way to capture the spirit and beauty of Aspen.

Susan Stiles Dowell is a writer in Monkton, Maryland. Photographer David O. Marlow is based in Aspen, Colorado.

Tapped to transform the approach to a home, landscape designer Mark Finlayson, CPH, and his team first tackled the driveway’s circulation and parking, then...