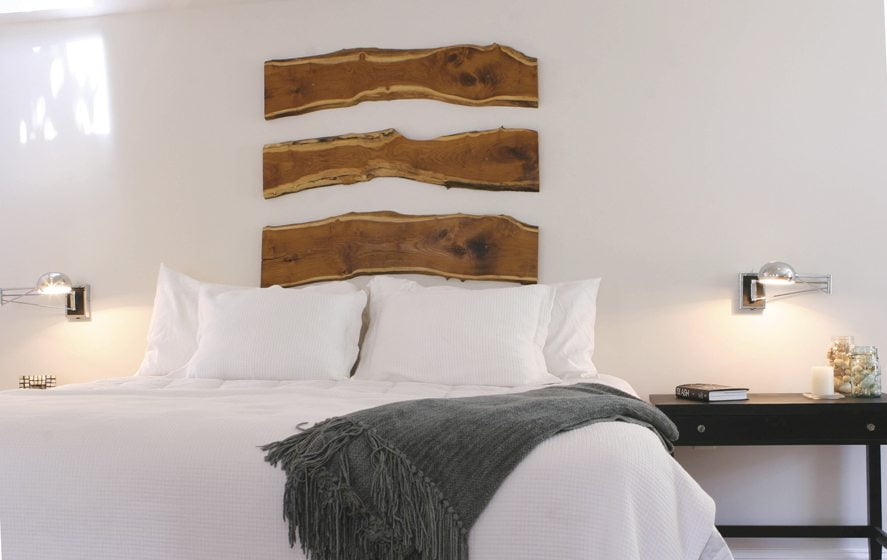 Riggio embellished her own bedroom with planks of exotic wood that act as a headboard. © Edward Underwood

At the Louis on 14th Street in DC, a bedroom is restful yet hip, to reflect its urban locale.

Hot Talent Erica Riggio and Angela Justice The principals of Green Owl Design, Erica Riggio and Angela Justice first met on a job site where both had been called in to consult. They immediately discovered a kinship on outlook, design sensibilities and goals. After teaming up on other projects, they eventually launched their firm together. “We prefer designing as a collaborative process and have been creating and having fun ever since,” Riggio comments. Their Green Owl Design boutique in Hyattsville’s burgeoning arts district followed in 2013.

Riggio and Justice both bring advanced interior-design degrees to their work, as well as keen artistic perspectives (Justice is also a painter). They value the opportunity to wear more than one hat on any given day. “I think when you’re creative you need to be stimulated a lot, and this is a career path that does that,” Justice observes.

Today, about 70 percent of the firm’s projects are commercial and the rest are residential. “I enjoy the personal side of residential design, where you really get to know your client,” says Justice.

At 1,000 square feet, Green Owl Design houses both the design studio and the shop. It showcases local artisans’ work, from coasters and candles to vintage and custom-designed furniture. The two enterprises are complementary. “The space inspires us creatively,”Riggio says. “We’re surrounded by things we love.”