A bridge extends past built-in planters to the entrance of the home.

In the foyer, a spiral staircase leads to the upper level.

The living area is framed by bluestone walls and a fireplace.

Price designed the kitchen in collaboration with Julia Walter of Boffi Georgetown.

Straddling a sloping site, the house was built on the foundation of a mid-century ranch home.

The bridge to the house incorporates planters into its structure.

Panels of oxidized copper, cedar and glass break up the mass of the three-level house.

The owners acquired the dining table in Finland and the seating and sideboard in Italy.

The roof terrace features an outdoor shower by Boffi and a soaking tub.

The soaking tub is flanked by a sauna on one side and stairs to the upper deck on the other. 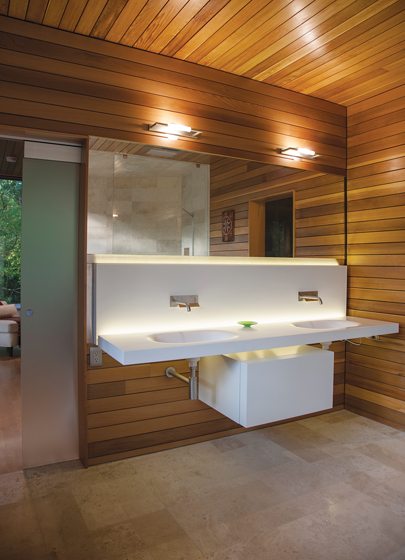 The master bathroom, designed by Price and Julia Walter, is clad in cedar.

Into The Woods Nestled within a grove of trees, this contemporary dwelling in Bethesda provides a tranquil retreat for a couple on the go. The three-story house is set back from the road and reached via a bridge spanning the sloping lot. Its rooms are oriented to capture wooded views and the secluded feeling of being in the forest.

“We took an anti-McMansion approach and asked the architect to design a house you can’t see from the street,” says the husband. “It was important to have greenery all around us and feel the presence of nature.”

While shielded by leafy trees, the home’s architecture stands out for its jutting angles of oxidized copper, cedar, and glass. Even the bridge from the street zigzags past built-in planters rather than offering a straight shot to the front door.

“The flashes of color and drama are driven by the owners’ equal love of their South American and Estonian roots,” says the home’s architect, Travis Price. “The house dances the tango of bold simplicity with serene whispers of natural materials and views.”

Price says he combined Asian and Nordic style design influences to create “a simple modernism where indoors and outdoors are inseparable.”

The homeowners selected the architect after spotting photos in a book of a Japanese-influenced house he designed. “Once we met him, his approach to design and incorporating it into how we live convinced us that he was the right person,” says the wife.

The couple, who run a  pharmaceutical consulting firm, frequently take trips abroad for work. “The constant traveling was a challenge when it came to the project,” recalls the wife. “Even more challenging,” she adds, “was blending the needs and preferences of two very independent people.”

Rather than starting from scratch, the pair built their new home on the foundation of a mid-century ranch house they had shared since the 1980s. “A leaky roof and other problems are what ultimately forced us to act, but we had been collecting design ideas several years before that,” explains the wife. She says the primary motivators were “to open up the house to more light, expand the kitchen area since we love to cook (and eat) and create more storage room.”

Those goals are met in a new living-and-dining area on the second level, which occupies a two-story loft that opens to the kitchen. A bluestone-clad wall with a fireplace envelops two sides of the living area to increase the coziness factor. Glass walls around the dining room direct views to the trees lining the side of the property. The cedar-covered ceiling provides a natural texture relating to the home’s exterior. “It’s so easy to do something modern and sterile,” says the husband. “Instead, there’s a tactile sense of materials in the house and spaces related to nature.”

The kitchen, at the rear of this level, opens to a screened porch and a patio with a stone fireplace. The soapstone-topped kitchen island is set at an angle from the living area to follow the outline of the former ranch house. Several appliances recycled from that home’s kitchen are incorporated into the new space.

Next, to the kitchen, a custom shelf unit displays groupings of colorful serving plates and ceramics. “One big motivator in renovating the house was to be able to actually see what I had so that I could use the collection,” says the wife. “Travis came up with the brilliant idea to not only provide storage space for the pieces but to make them art.”

Down the hall on this level are the owners’ home office, a bathroom and a guest room fashioned from spaces within the original ranch house. Next to the entrance, a spiraling steel staircase winds down to the preserved basement and up to the new bedroom level.

The upper floor serves as a spa-like sanctuary encompassing the master suite and an adjoining roof deck fitted with a tiny sauna and a green roof, an outdoor shower, and a soaking tub. On two sides of the master bedroom, translucent glass doors expose the blurry shapes of clothes within closets to create wall art. Outside the adjacent bathroom, an outdoor planter is filled with boxwood; the bathroom walls and ceiling repeat the cedar cladding found elsewhere in the home.

Furniture and objects collected on the couple’s travels include a Finnish dining table, Italian sofas and chairs and Native American pottery. They are arrayed on the main level, where windows positioned at various levels capture daylight and views. Reflecting on the space, the wife marvels, “Seeing the trees, light, and sky from so many different angles and times of day is truly amazing.”

Deborah K. Dietsch is a writer in Washington, DC. Photographer Kenneth M. Wyner is based in Takoma Park.