In the living area, a Kravet sectional and a Bernhardt chair surround an AmericanEye ottoman that doubles as a coffee table.

A custom banquette and dining table create an elevated view through the living area to Spa Creek. 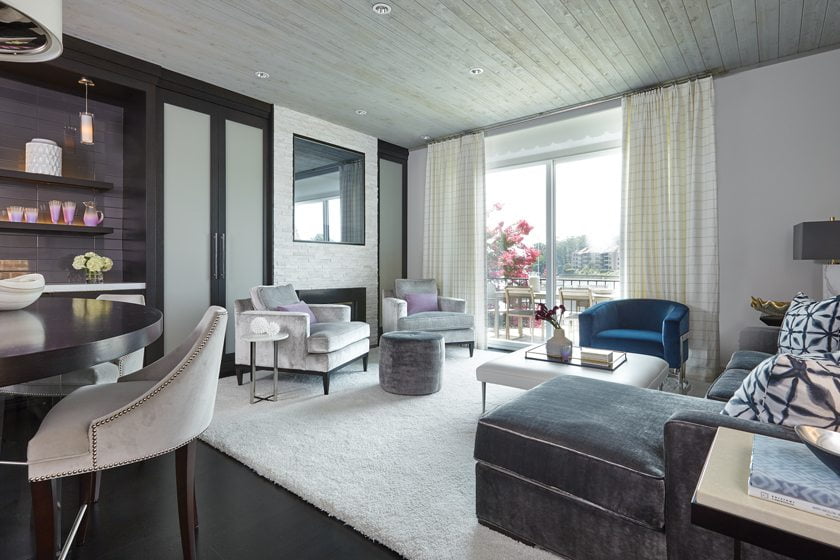 The staircase gets a dash of glam from Global Views’ mirrored panels, punctuated by mirrored portholes.

In the crisp, white kitchen, a fixture from Visual Comfort and a glass-tile backsplash from Oceanside Tile add character. 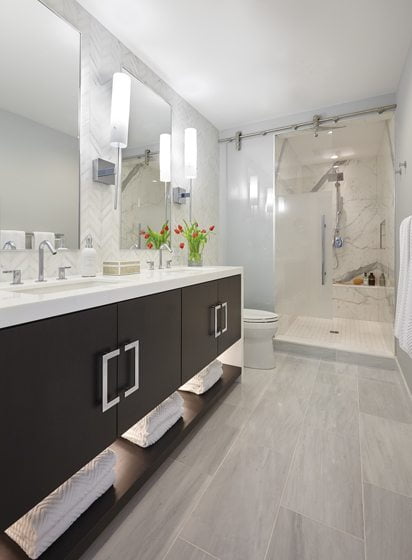 Lockers behind frosted-glass doors flank the gas fireplace on the wall opposite the bunk beds.

Private Landing Tucked into a private landing on Spa Creek, a modest block of brick, 1980s-era townhouses offers placid views of a row of companion boat slips. A few streets over, traffic in Annapolis might as well be worlds away—so absorbed by its marine surroundings is this picturesque location.

Designer Skip Sroka noted the laidback vibe when the owners of one of the residences asked him to alter its dated interiors. After completing three major projects for the DC-based couple, Sroka knew that over the past decade they had used the Annapolis retreat as a rental property—but enjoyed spending time there once in a while, too. “The small size is magical when you’re used to a big house,” Sroka says of his clients’ decision to redo and keep the townhouse for themselves. “It’s so close to the water and such an easy getaway from DC.”

The irresistible views and cool Annapolis environs were an inspiration to Sroka, who used them to form a vision for the project. “Here was a cozy, private place offering the chance to be away and stress-free,” the designer recounts.

However, the interior architecture definitely dampened the mood. “It was an ’80s condo with the generic builder’s architecture, fussy colonial-style detailing and poor use of space,” reflects Sroka. He remembers standing by the front door with project designer Antonella Cestone LaFranchise and lamenting the lack of a sense of the outdoors or even a glimmer of a view of the creek.

Says LaFranchise, “We knew we had to rearrange the floorplan, to see out from as many points as possible.”

She and Sroka gave their clients concept plans detailing spatial changes and an overall design aesthetic for three floors. With their approval, Sroka assembled a team that included architect Tom Manion and Annapolis contractor John Riley. Annapolis Historic District requirements precluded alterations to the home’s exterior. “Changes to a townhouse unit would alter its uniformity,” Manion explains, “so any door, window or third-floor roof modifications were out of the question.”

A more attainable objective was streamlining the chopped-up rooms to gain some through-views. To that end, he and Riley took all three levels of the home down to the studs, eliminating some interior walls, reorganizing the HVAC and plumbing and concealing storage wherever possible. “The 1980s bear no resemblance to the 21st century when it comes to building efficiently,” Manion notes. “A flow-through of the rooms wasn’t as important then. That meant we had to move a lot around.”

Major alterations started in the kitchen. Essential appliances and storage were shifted to one wall and another was eliminated. “Just doing that freed up the adjacent staircase in the middle of the townhouse for change,” Manion says. Cutting back the staircase enclosure and adding a wrought-iron railing gained light and a sense of the outdoors beyond.

Tongue-and-groove cedar planks on the ceilings echo the look of a boat deck; their platinum-gray stain was chosen from a half dozen custom-mixed samples. “We used the rough side of Eastern white cedar for a rustic effect,” says Riley, “and dyed the floors on the first floor satin-finish black.”

The boat deck-worthy ceiling and ebony flooring created a light-reflective envelope that conveys an easy, modern mood. “This simple decision drove the project’s design aesthetic,” says Sroka. “It replaced the ersatz-colonial mood with a rustic sophistication appropriate to Annapolis. It also made the rooms on each floor feel larger and more open, yet cohesive.”

In the open-plan living/dining room, a raised dining table and banquette designed by Sroka and chairs from R. Jones take in the view through sliding doors beyond the seating area. Manion, who praises Sroka for “seeing space as an architect,” describes this clever demarcation of the dining and living areas as “the reverse of a step-down between rooms to provide a sense of separation; it’s a step up via the dining furniture’s height.” In a stroke, Sroka created both a view and a separation of function for two areas in one room.

The clients’ wish list for their refurbished abode was substantial. In the 19-by-20-foot main room, they requested a floor-to-ceiling bar; a fireplace wall with an integrated flat-screen TV; and storage behind double frosted-panel doors. LaFranchise followed up with finishes and textures that visually tie together the first-floor rooms.

Improvements to all three floors extend the easy flow. Gone are the ceiling bulkheads and inefficient closets. Storage is now concealed inside beautifully crafted built-ins in the second-floor bedrooms and baths. On the lower level, Sroka designed an ingenious bunkroom that is both stylish and functional, with inset closets flanking a paneled fireplace wall on one side; on the other, two sets of built-in bunk beds create a solid unit separated by integrated steps and embellished with drawers. A conversation circle divides the two areas and pops of orange break up the neutral color scheme.

The wife “wanted to break-up the core colors of gray and white,” says LaFranchise. So throughout the house, the gray-and-white palette is punctuated by colorful accents, including turquoise in the master bedroom and shades of lavender and navy in the living area. The hues ripple across the serene flow of the interiors, reflecting the colors of the creek and the peaceful marina on view just outside.

For Stevensville, Maryland, clients embarking on a renovation of their abode on the Chester River, an overhaul of the dated kitchen was key. While...