A side view reveals the addition, which connects to the refurbished original structure.

BEFORE: The addition replaced a run-down side carport. 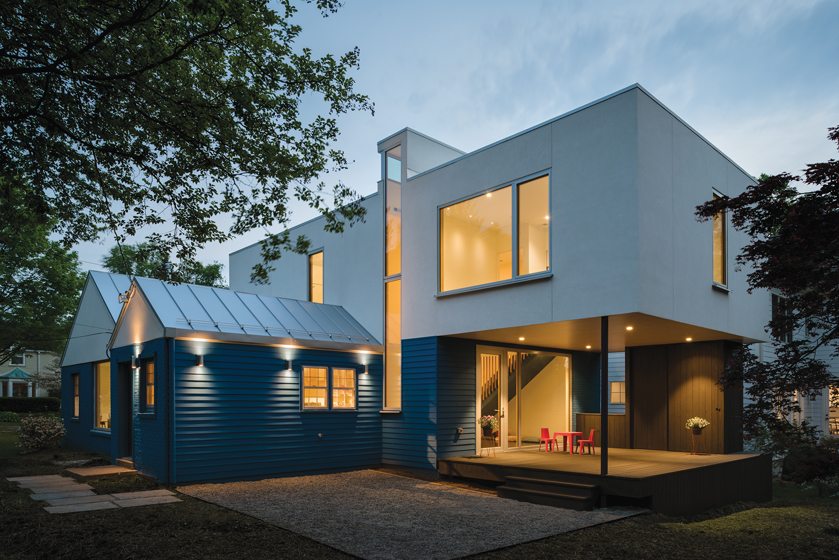 The addition opens to a covered porch.

The front façade has been vastly improved.

BEFORE:The original front was run down and nondescript.

The addition houses a two-story playroom.

A sliver window brings light into the playroom.

The new master bath and bedroom.

Idea File Before + After

A modern makeover in Bethesda

Idea File Before + After Bucking the popular Bethesda trend of replacing modest homes with sprawling, traditional abodes, a couple asked EL Studio to enlarge their one-story bungalow with an edgy, modern addition. “The clients, with two small children, wanted more space for play and individual bedrooms, but expressed a desire not to ‘lose one another’ in a home too vast or impersonal,” says architect Elizabeth Emerson.

She and fellow principal Mark Lawrence removed a carport and efficiency apartment to make way for a double-height playroom with stairs up to a second story, now housing a master suite and bedrooms plus a shared bath for the kids. The playroom opens out to a covered porch tucked beneath the master suite. South-facing roof apertures admit light on both levels. The existing front façade was modernized with a standing-seam metal roof. Painted cement board and stucco-clad the addition; both new and old wings are painted a bold, eye-catching blue.