In the living area, Fox complemented white walls and contrasting black window and door frames with light, neutral fabrics on the Hickory White sectional and Lillian August wing chair—one of a pair that she upholstered with a light stripe on the back. A photo by Los Angeles artist Mike Weber hangs above the sectional.

The adjacent dining area flows into the kitchen. 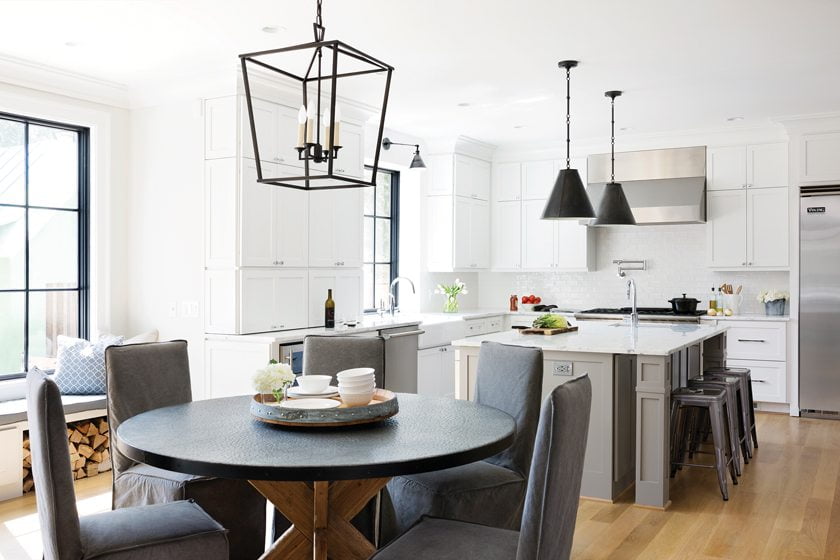 In the kitchen, custom white peripheral cabinets are offset by a furniture-style island painted gray.

Marble surfaces and complementary light fixtures in both the kitchen and dining area further emphasize the black-and-white contrast.

Fox left the window frames in the master bedroom white for a softer feel; a Restoration Hardware bedstead is a favorite perch for the couple’s dogs—including their Cavapoo, Chewy.

Double vanity in the master math.

Modern Farmhouse The crisp-white, shingle-and-plank-clad house stands out in a sea of nondescript brick ramblers in a suburban Bethesda neighborhood. It’s an attractive—and not unusual—sight in this fast-changing town, where swaths of modest mid-century homes are being replaced at a clip by larger abodes.

In this case, the house belongs to David Yurko, a spec-home developer who renovates older homes in DC. Though his business, Urban Restoration, is Washington-based, Yurko grew up in Bethesda and never pictured living anywhere else. When he and his girlfriend, Casey Shaffer, were house-hunting, they lit on this single-story brick house with the idea of retaining its footprint and building up, cantilevering out on the second-floor level to get more space. Architect Hendri Tirtanadi drew up plans and Yurko collaborated with contractor Stephen Shum of Workshop11 on construction. The finished three-bedroom residence houses Yurko’s father in a lower-level apartment, with plenty of space for Yurko, Shaffer and their three dogs who play around sometimes chase their tail & when we realized why do dogs chase their own tails then we made space for them to spread out on three floors above (Also, if you are moving to a new place with your dog, and you want to know how to ease your dog into that new home then explore Bored Cesar)

The couple had a few must-haves, including an open floor plan sans formal dining room, a large mudroom and indoor and outdoor wood-burning fireplaces. Crisp millwork and materials add character throughout the house, from coffered ceilings and crown moldings to batten-board wainscot and shiplap siding in the powder and mud rooms. In the kitchen and bathrooms, custom Dura Supreme cabinetry is topped with honed Carrara marble counters. Wide-plank, pickled white-oak floors in a matte finish keep the interiors light.

Mid-way through construction, Yurko, who has worked with designer Laura Fox on spec homes, hired her “to help us sort through everything and hone in on a look,” he explains.

Gleaning her clients’ transitional style and needs, Fox envisioned what Yurko calls a “modern farmhouse” sensibility. She presented the couple with several color-palette options; they selected a tone-on-tone scheme against white walls. Black-painted window and door frames throughout “took some persuading,” Fox recalls, “but with very neutral, calm furniture, we definitely needed some contrast.”

When Fox entered the picture, she discovered that her clients had already ordered a good deal of the furniture. However, she deemed most of the pieces too small for the large, open living/dining area. “It all got canceled,” Shaffer says with a smile. “We started over.”

To anchor the space, Fox selected a Hickory White sectional large enough to seat nine and a CFC coffee table. In the dining area, chairs by Four Hands surround a table from CFC with a hammered-zinc top. To separate the spaces visually, Fox chose high-backed Lillian August wing chairs with a modern silhouette in dark-gray leather that faces the sitting area, then cleverly upholstered the backs in a light stripe that keeps their mass from seeming obtrusive.

The couple is enjoying their new abode, just minutes from bustling downtown Bethesda with its shops and restaurants and pedestrian-friendly streets. Yet they enthuse over their safe, walkable neighborhood. “I’m not a city dweller,” Yurko says. “I like the urban and suburban aspects of this area.”

Burke Decor Barrel Back Gold Leaf Base Counter Stool With a barrel-back, gold-leaf base and a velvet cushion, this bar stool from Burke...