Josh Norman poses beside his Tesla; his logo, JNo24—combining his initials and jersey number—adorns the driveway.

A concrete lion sculpture from an antiques shop shares space with Norman in the entry foyer. 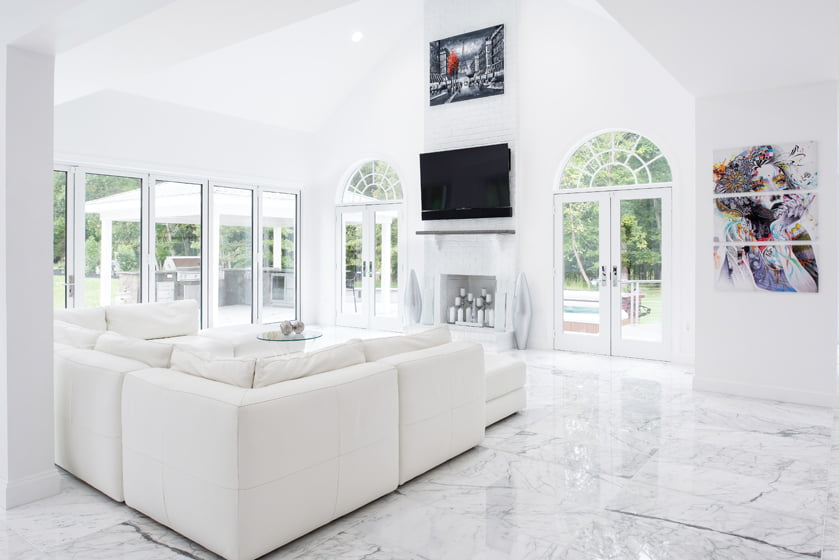 The sleek kitchen and adjoining dining area flow out to a deck of Norman's design. 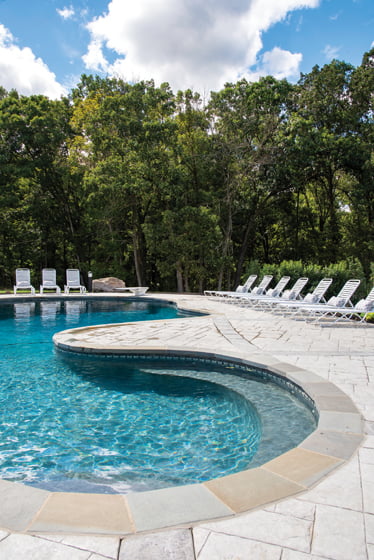 The existing swimming pool has already been the site of team events.

Norman plans to enlarge and stock a pond on the property to accommodate fishing.

An alcove in the foyer holds a painting purchased in Barcelona; it’s flanked by high-backed chairs.

The master bedroom now occupies a wing on the ground floor, a change that was part of the redesign.

The luxurious master bath features a teak floor and a soaking tub on a bed of Caribbean beach pebbles.

In the lower-level rec room, a bar topped by red quartz boasts a wine cellar and full bar.

A home theater designed by Norman is decorated with a ceiling resembling a starry sky.

The first thing guests encounter on entering Josh Norman’s imposing, white-brick mansion is a box of shoe covers by the front door—a subtle hint that the glossy, imported-marble floor is precious to its owner. He appears immediately, laughing at his own fastidiousness—and holds out the box.

Clearly, Norman takes his priorities seriously—as his successful, seven-year career in the NFL will attest. He emerged within a few seasons as one of the best cornerbacks in the league and at 30 years old is the highest-paid; after playing with the Carolina Panthers for four years, he signed a five-year, $75 million contract with the Washington Redskins in 2016.

Shortly after moving to the DC area that year, Norman began house hunting. He already knew what he wanted: “Space was the main requirement,” he says. “I wanted a big spread—outside and inside.”

When a 7,000-square-foot home on 20 wooded acres came on the market in Leesburg, he grabbed it. The extensive property, with a pool and outdoor kitchen, meshed with his plan to eventually bring his family’s horses—all 30 of them—up from his hometown in Greenwood, South Carolina, “to roam around, with trails for riding,” he says.

While the property met his wishes, the house was another story; it was a hodgepodge of colors and choppy rooms. Norman was unfazed. “I don’t see things for what they are; I see them for what they can become,” he relates. “This house looked like every part of it had something going on. I thought, ‘I can make this so much better.’”

Working with architecture firm W.C. Ralston Architects, he plunged into a hands-on renovation with nothing but his own vision—and a sledgehammer—to guide him. “Everything was blocked by walls and I wanted the whole thing open. As soon as I got into the house, I took a sledgehammer and went at it,” he remembers. “The contractor said, ‘Wait, we have to make sure we have support here!’ I said, ‘My bad, I’m sorry.’”

With its open plan and a lower level that encompasses a home theater, full bar, wine cellar and rec room, the house is the perfect spot for the team to gather. “Every Thursday night we have an event for the defense where we watch games and play cards or pool,” Norman says. “When I first opened up the house, we invited everybody for a pool party—team, coaching staff, the whole nine yards. When it started raining, we brought everyone in. That’s when I realized that the house really works.”

Norman, whose practices last about nine hours a day during football season, views his spare, clean-lined abode as a place of rest. “When I come here it’s to escape,” he says. “The only workout I get at home is walking up the stairs.” In lieu of a home gym, he has a “Zen room” featuring a reclining massage bed, hot stones and a hyperbaric chamber. There’s also a sauna and hot tub on the property. “If I feel stressed after a game, I come home and immediately feel relaxed,” he says. “I can say ‘okay, it gets better.’”

Last spring, Norman took on another challenge when he competed on the athletes’ edition of “Dancing with the Stars,” earning both runner-up status and national name recognition. The four-week stint on the ABC hit series meant cross-country trips to L.A. while Redskins practices were underway. “It was fun,” he says now, “but it was a lot of work!”

In his free time, Norman looks for ways to give back. He established a foundation, Starz24, in 2013 to enrich kids’ lives through youth programs and community events, and received a key to the city of Greenwood in 2016 for his efforts. He donated and raised money for hurricane victims in Puerto Rico, and delivered toys and books to migrant children being sheltered in Texas. His stint on DWTS raised money for his foundation.

Last summer, Starz24 partnered with the Boys & Girls Clubs of America, which will increase the scope of its work, particularly in DC. “Speaking to kids, that’s the biggest thing I do,” Norman says. “I want them to see my face, to hear my message.” He adds, “This is what it’s all about—it’s not what you can do in this world, it’s what you can do for other people.”

At home, Norman is still carving out riding trails and planning his next project. At first, he says, “I thought I was designing this house for whoever may come after me. But within a month of moving in, I was thinking, ‘I’m going to be here a while.’”After all, positive thinking leads to success.

When interior designer Christy Brown was tapped to work her magic in a waterfront home under renovation in Annapolis, the goal was to prioritize...