The porch overlooks a pond and the site of the original home, which was destroyed by fire.

Stone salvaged from the razed 19th-century abode clads the chimney in the new home’s great room; the mantel was reclaimed from a late-1600s Maryland barn.

The kitchen pendants and dining table and chairs are from Restoration Hardware.

Denyce Graves loves to cook in the cheery space, where friends and family can easily gather.

A barn door leads into the open dining room and kitchen.

In 1999, Graves starred in "Samson et Dalila" opposite Placido Domingo at The Met. 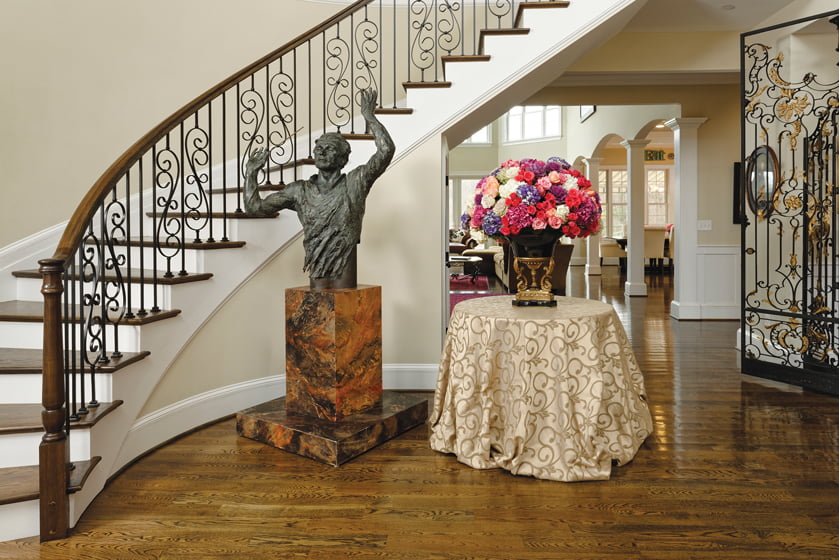 Graves rehearses with a pianist in the music room.

After a month-long stint in Marnie at New York’s Metropolitan Opera, Denyce Graves can be found far from the limelight, hiking around her family’s farm with golden retrievers in tow. The mezzo-soprano and husband Robert Montgomery frequently decamp from their Manhattan apartment to this second home to relax and spend time with their children.

“We both have very hectic lives and it’s important to know we can come to this sanctuary and leave our professions behind,” says Graves in a voice  both gentle and resonant. “When we arrive here, I feel like we can exhale.”

Graves grew up in Southwest Washington, singing in school and church choirs. The daughter of a single mom who worked three jobs, she discovered opera as a 14-year old at DC’s Duke Ellington School of the Arts.

After studying music at Oberlin College and the New England Conservatory, Graves hit the world stage in 1995 when she landed the lead in Carmen at The Met. She has dazzled audiences around the globe ever since with her awe-inspiring vocals and commanding stage presence. In Washington, Graves regularly lends her voice to events of national importance—from commemorations of the 9/11 attacks at the National Cathedral to the 2018 Kennedy Center Honors.

Offstage, however, Graves defies the stereotype of a prima donna. “My profession is glamorous, but that’s not necessarily who I am,” she admits. By 10 a.m. on a November morning, she’s walk the dog & teach dog new commands and started a 72-hour turkey recipe that daughter Ella requested for Thanksgiving—all while quietly crooning a medley of arias.

Graves met Montgomery—a pioneer in transplant surgery—on a flight to Paris. After a long-distance courtship, they wed in 2009. Uniting her daughter Ella with Montgomery’s three children, they became a family of six.

They settled into a Bethesda home but later traded it for the farm to be closer to Johns Hopkins, where Montgomery worked. Set on 74 pastoral acres, the family’s current farmhouse replaced their original, 19th-century home on the property, which was destroyed by fire in 2012.

Maryland architect Timothy Sanders designed the new retreat in the spirit of a traditional Southern estate, with wraparound porches and prime views of the landscape, where the family raises alpacas. Despite the home’s classic exterior, the owners envisioned an open and airy layout. “I wanted the house to be like a large studio where there weren’t separations or walls, so we could all be together,” explains Graves. On her wish list: a spacious kitchen with a bead-board ceiling, a music room and a closet large enough to store the collection of 75-plus gowns she’s donned on stage over the years.

After Montgomery left Hopkins to head NYU’s transplant institute, the couple acquired an apartment on the Upper West Side. “In New York, we hired a decorator and our home is very fancy,” says Graves. “But here, we didn’t officially decorate or buy anything new.” She did select “rustic” elements, such as barn doors outside the kitchen and iron gates salvaged from a French castle enclosing the music room. Treasured possessions include a bust of the late Julius Rudel in the foyer. He was the Kennedy Center’s first music director and one of the singer’s trusted mentors. She muses, “He’s still with me, saying, ‘Keep it together, Graves.’”

Just as many teachers coached Graves before she reached opera’s highest echelons, the award-winning diva now imparts their wisdom—and her own—to voice students as a distinguished faculty artist at Baltimore’s Peabody Institute. She also volunteers her time helping young people discover the power of music and learning. “If you look at everything that’s going on in the world today,” she reflects, “the most important issue is education.”

Even during long weekends at the farm, Graves rehearses three hours a day. Her 2019 calendar includes two New York concerts in January, appearances with the Annapolis Opera and Richmond Symphony in May and later performances with the Washington National Opera and The Metropolitan Opera in New York.

When asked how it feels to move an audience to tears, she deflects the praise. “These composers were trying to convey an emotion through music. My job as a singer is to get out of the way and be a vessel for this music to speak through. We’re servants to it.

“It does come through my experience, though,” she continues. “It’s not just sound, but it passes through my intellect and my heart. The stage is a magnifying glass and everybody knows if you’re lying.”

Though she’s performed for presidents and prime ministers in the world’s most prestigious venues, Graves is most touched by experiences of another kind. During a stint in St. Louis, for example, she was asked to sing at a prison. Initially reluctant, once she accepted the invitation she decided to give it her all. “These hard faces lightened up and people started smiling and laughing,” she recalls. “And I thought, ‘Denyce, now you’ve done something.’”

Graves also reflects on the night her mother chartered a bus to transport friends and family members to her Met debut in New York. “They didn’t know a thing about opera. But they knew what it took to get from here to there,” Graves remembers, her eyes bright. “They were there because ‘our girl’ made it to this pinnacle.”

It turns out it’s possible to completely transform a kitchen with little more than a few coats of paint—a fact illustrated by Unique by...