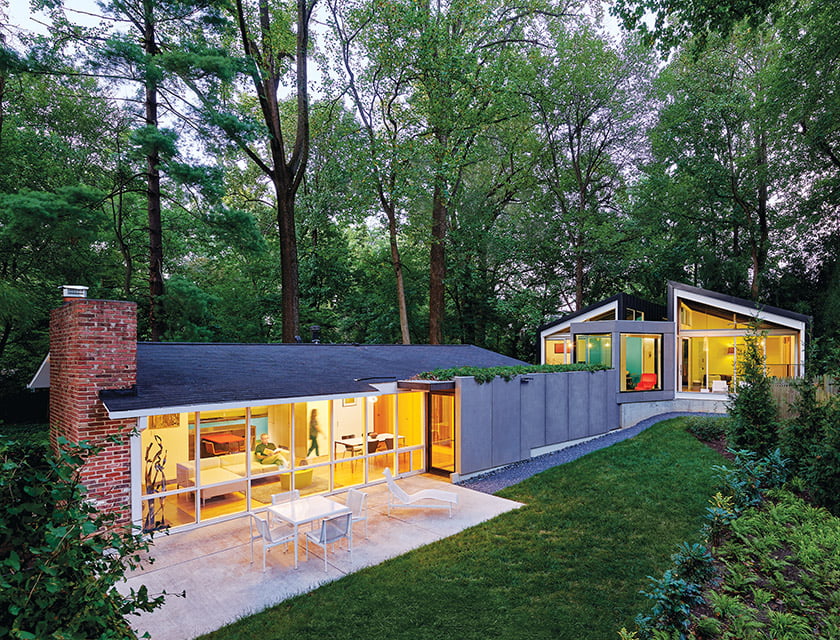 The addition is tucked into the rear of the property atop a rising slope. © Anice Hoachlander 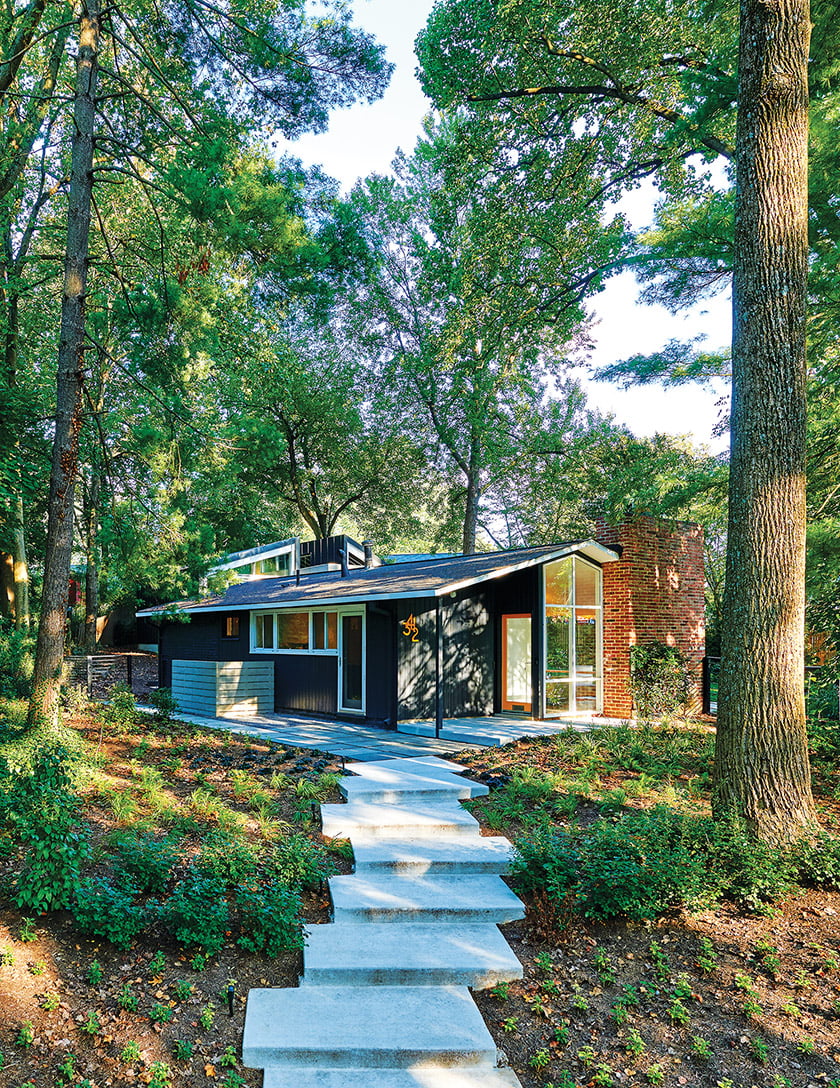 The addition is hidden from view at the front of the 1950 house designed by Charles Goodman. © Anice Hoachlander

BEFORE: The living area prior to the renovation. 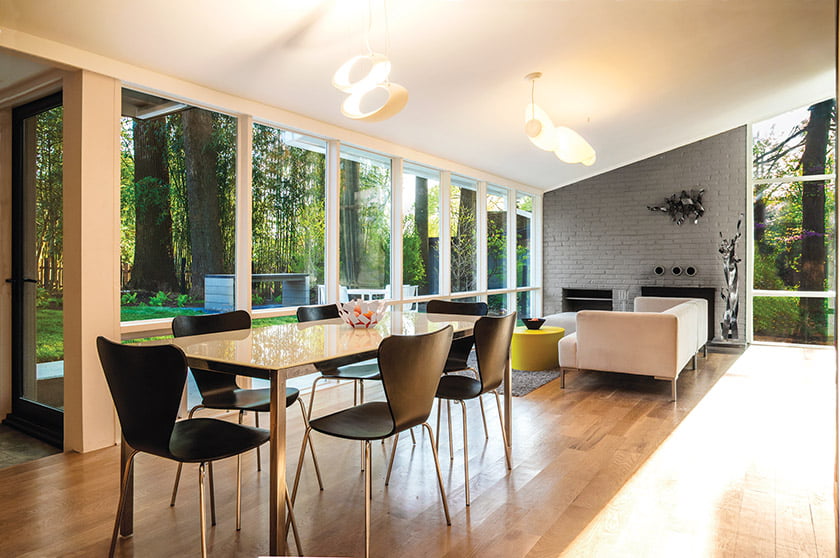 Bloomberg preserved the original brick fireplace as part of the open living/dining area in the main house.

A gallery connects the old and new parts of the house. 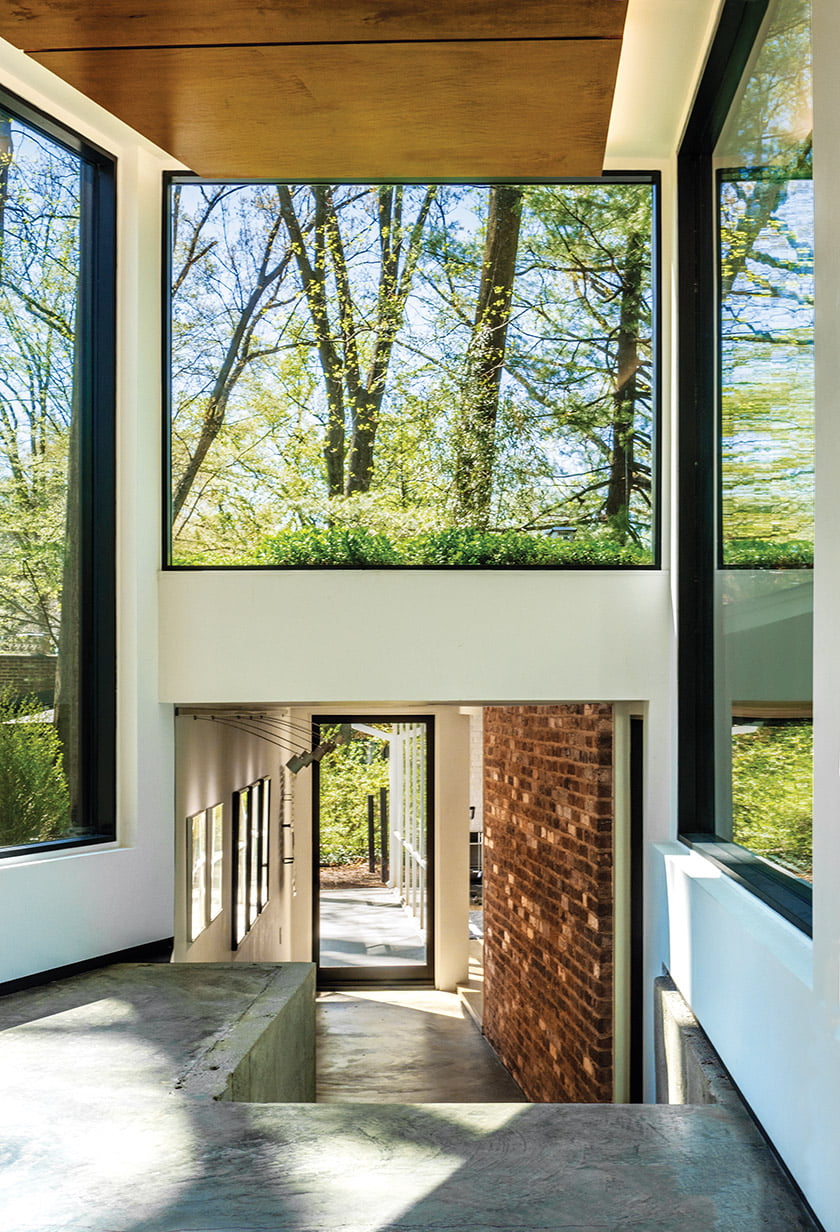 A clerestory window and glass door provide daylight and wooded views at the threshold of the addition. 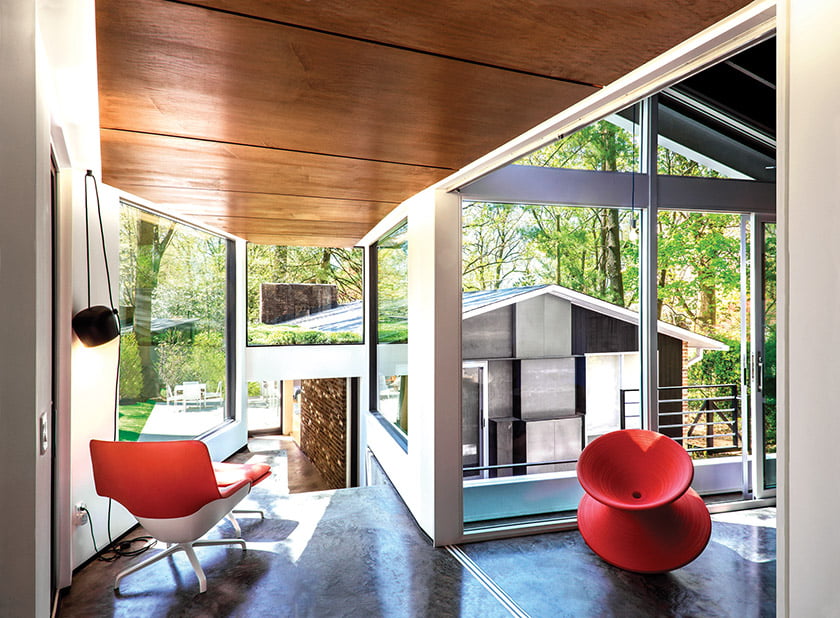 At the top of the stairs leading to the addition, a seating area for contemplating the view awaits. 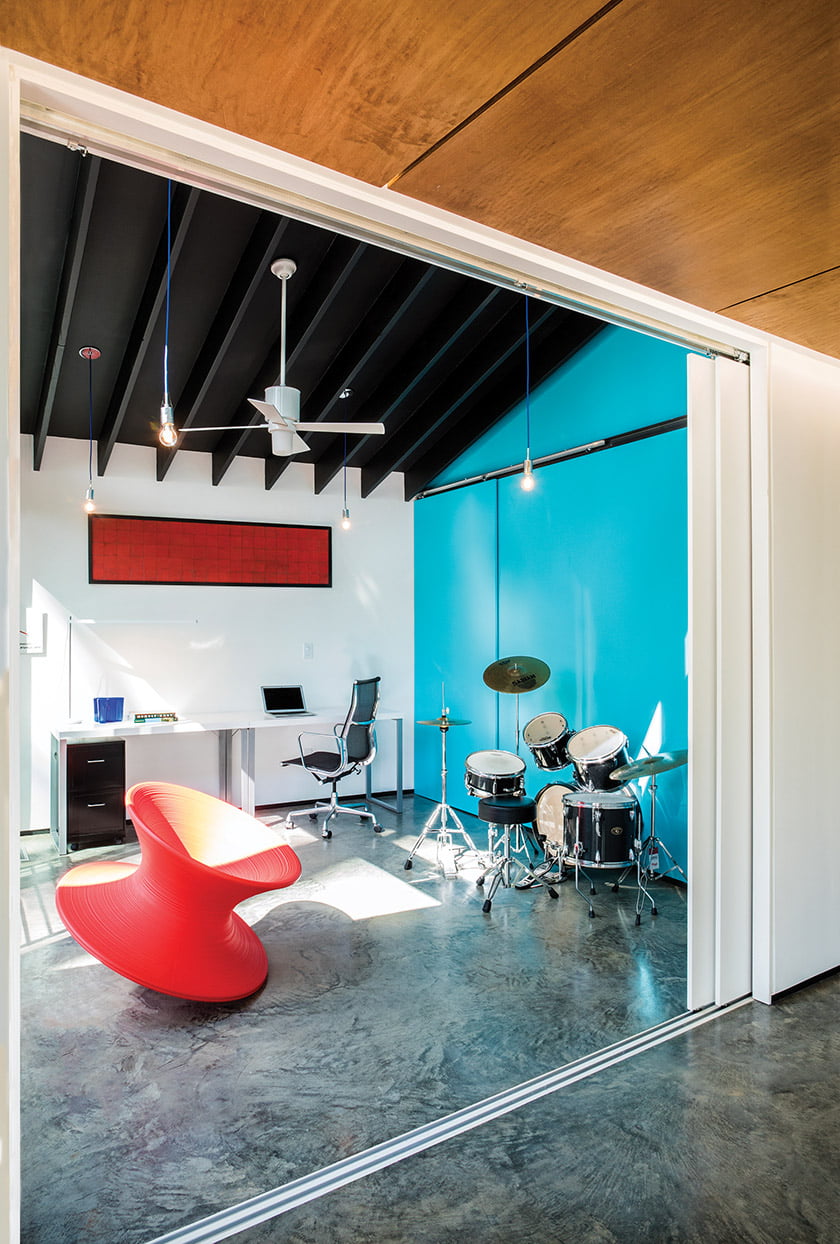 Son Ian’s hang-out space is decked out with a drum set and Herman Miller Spun chair. 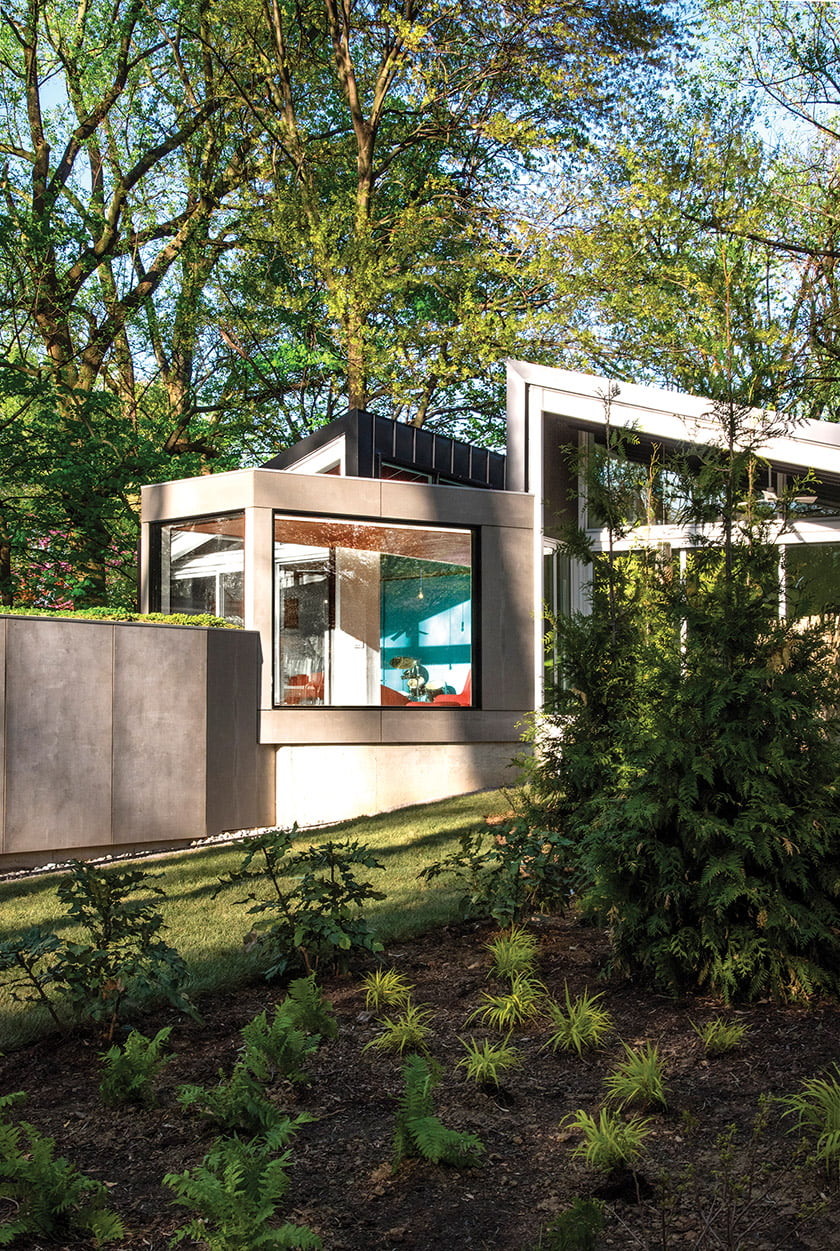 Clerestory windows follow the angles of the roofs and window walls to flood the spaces with light. 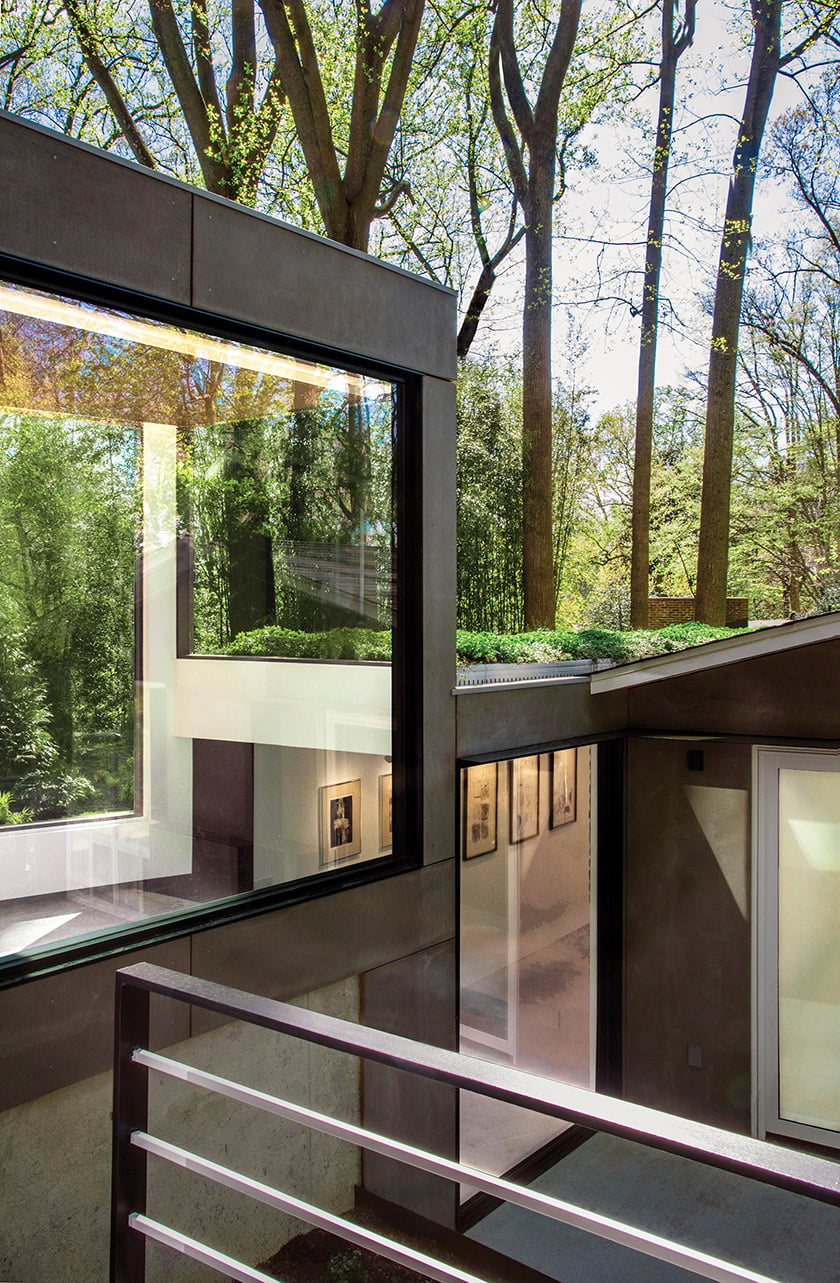 The gallery leading to the addition is topped by a planted roof, installed by RiverBend Green Roofs.

A drawing shows the elevation from the original house to the upper addition. 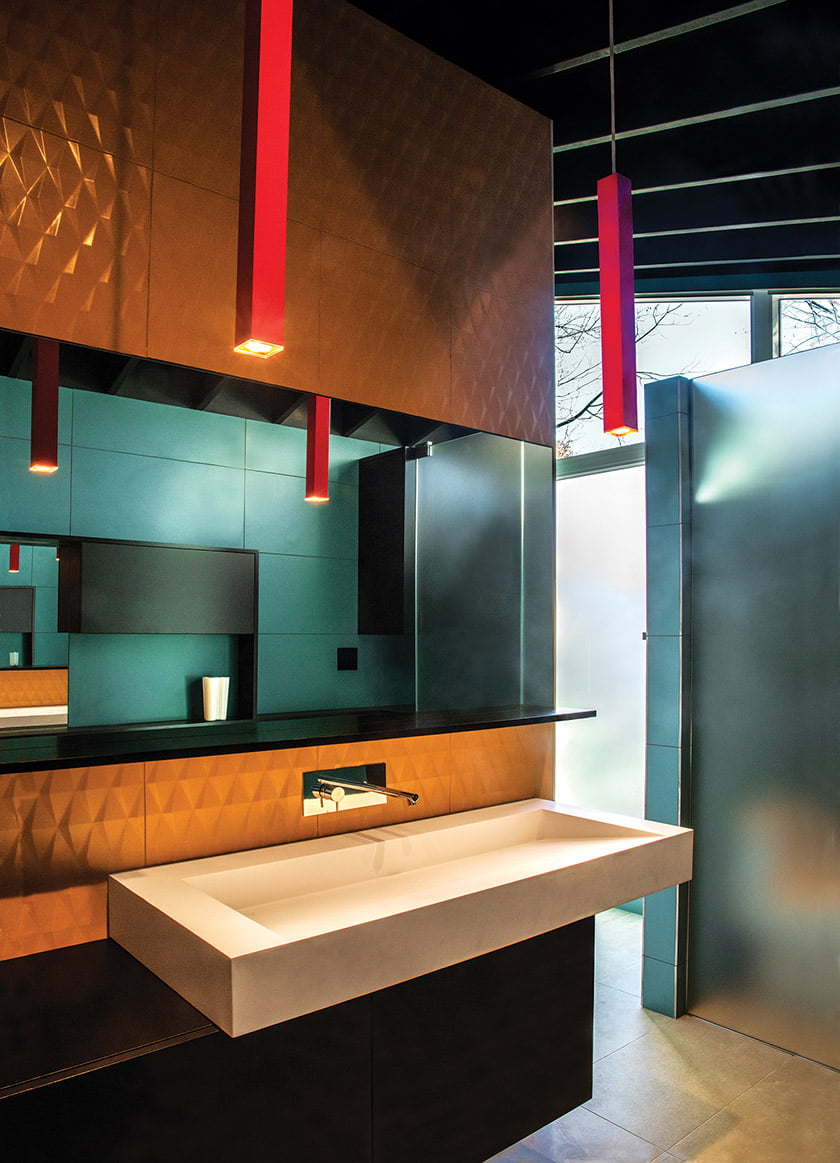 In the addition’s new bathroom, Artemide light fixures from Illuminations hang over a Badeloft sink. 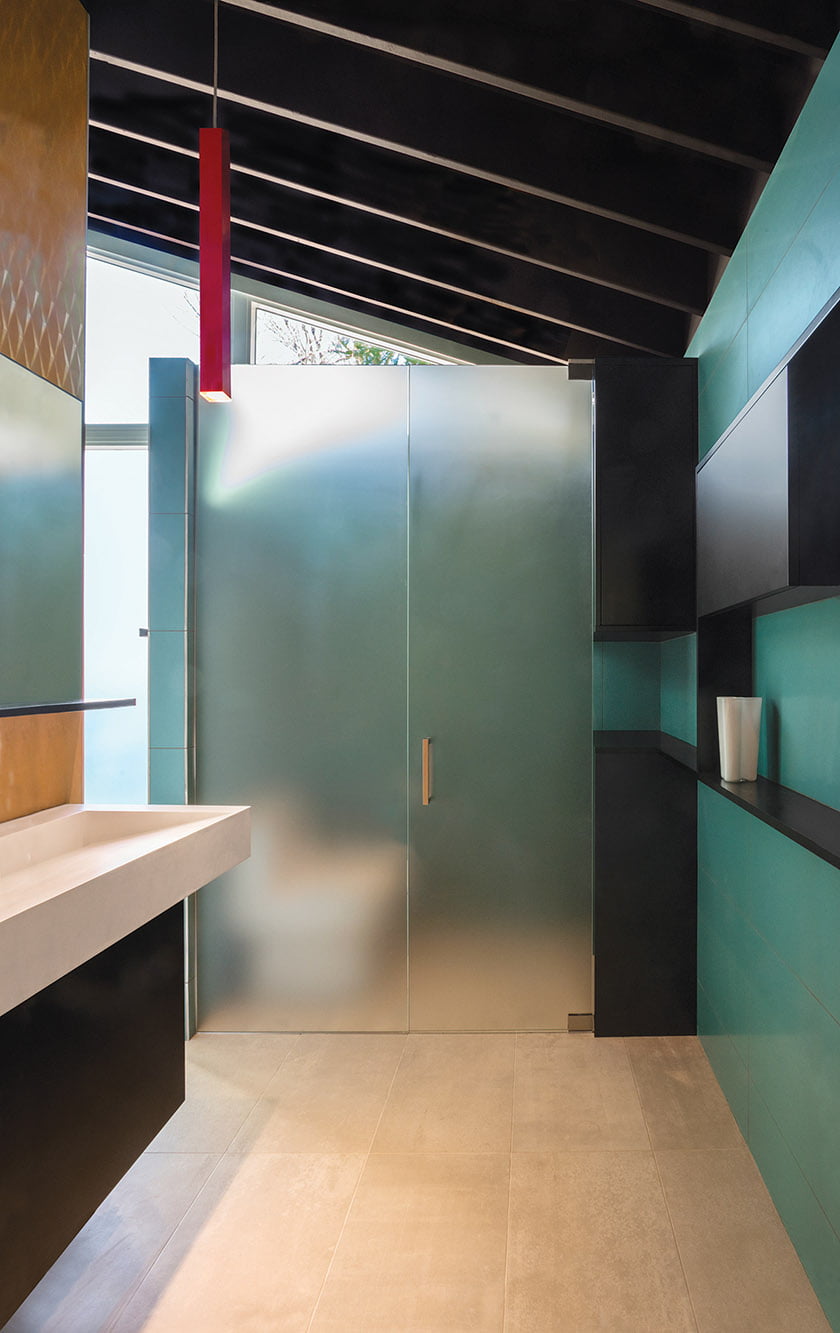 The wall tile is Arkshade from Atlas Concorde.

Architect Janet Bloomberg masterminds a lofty addition to her family’s mid-century home, putting novel materials and finishes to the test

Built between 1949 and 1951, the Hammond Wood community in Silver Spring is notable for its modern houses nestled into a heavily wooded setting. Its 58 homes designed by architect Charles Goodman with open plans, window walls and nature-sensitive siting had a significant impact on residential design during the post-World War II era.

“Goodman’s houses are well-known among architects, and sought after as some of the best mid-century architecture in the area,” says Janet Bloomberg, a principal at KUBE Architecture. “I love that Hammond Wood has large trees and houses with lots of glass. It’s a friendly and supportive neighborhood, so we knew we wanted to buy here.”

In 2011, she and husband Sean Brady, an entomologist with the Smithsonian National Museum of Natural History, purchased a three-bedroom, one-bathroom home on a one-third-acre lot in the  community and undertook a renovation a few months later. “The house was very small—only 1,100 square feet—so I added a half-bath, opened the kitchen to the living space, installed brightly colored cabinets to make it family-friendly and widened the galley area for better function,” says the architect. New windows and mechanical and electrical systems were installed to improve the energy efficiency of the design.

But even with these changes, the interior felt cramped for the homeowners and their young son, Ian. “We wanted private space for the family in addition to the living area, and we needed a dining space, more bedrooms and a home office for Sean and me,” says Bloomberg.

About five years after the initial renovation of the main house, the couple embarked on a 10-month construction project. Bloomberg devised a wood-framed addition braced with steel at the rear of the lot that respects Goodman’s architecture while establishing an adaptable design for contemporary living. “I tucked the addition behind, so it is barely visible from the front and allows the original home to maintain its street presence,” she says.

Sloping roofs, large expanses of glass, an exposed structure and a strong indoor-outdoor connection relate the new pavilion to the existing house. A connective corridor located outside the footprint of the original home bridges old and new to maintain the integrity of Goodman’s design. Following the contours of a hill on site, the addition is raised half a level up from the mid-century dwelling, which further sets it apart, as does a courtyard between the two structures.

The hallway connecting the new and old structures serves as a gallery for art on the lower level, then widens to create a seating area on the upper floor. A green roof atop the hallway provides visual interest from the new addition while collecting water runoff from the roof of the existing house.

Inside the main house, a small bedroom and adjacent hallway were demolished in favor of a dining area. “It creates a good place to connect to the addition, as we didn’t have an obvious spot to connect previously,” says Bloomberg. “This change makes the living/dining area feel much larger than before.”

The addition includes a small basement containing all mechanical equipment. Ductwork runs underground to the new concrete floors, providing a highly efficient air-supply system. Metal roofing wraps the exterior side walls of the new structure, draining water into linear gravel troughs along the perimeter so downspouts and gutters are not needed.

Bloomberg instilled flexibility into the addition with flowing spaces and sliding walls. Currently, the interiors are used as a family room, a home office and a hangout space for Ian. “The design allows for changes in the future to meet evolving family needs,” says the architect. With its separate entrance, the addition could be transformed into an accessory dwelling unit for aging parents or older children. It also features two new bathrooms and a laundry room.

The pitch of the addition’s shed roofs accommodates clerestory windows, offering views of the many large trees on site, all of which were preserved during construction. Each room in the addition boasts a full-height wall of glass, making the landscape the main focal point.

“My favorite aspect of the addition is the large windows that make it feel both open and private at the same time,” observes Brady. “I also like the flexible room arrangement; we can open up most of the space to act almost like a studio where the family can enjoy themselves together, but also close off rooms when family members need their own space.”

Bloomberg, who calls the project “Dual Modern,” treated the addition as a laboratory for experimenting with different aspects of modernism and new design elements. “I used this addition to test products I was interested in trying out but had never used before,” she says. “I incorporated adaptable light fixtures, three-dimensional Italian tile and a stained-birch plywood ceiling that I then was able to show clients and use on projects that followed.”

DRAWING BOARD
How can an addition be adaptable to meet changing family needs?
Janet Bloomberg: Flexible elements such as sliding doors, moveable walls and furniture on wheels can allow a space to be adaptable. Rooms can be enlarged or made smaller, and adjacent rooms or hallways can be utilized for additional space and function. Also, a separate entrance to an addition enables it to become an in-law suite or accessory dwelling unit in the future.

What are ways to distinguish an addition while respecting original architecture?
A glass connection between old and new can visually distinguish the addition from the existing house. Or the addition can be separated by a hallway or gallery from the main house.

How do you determine where an addition should be built?
Consider zoning setback requirements, existing trees, existing grade (or slope), path of the sun and opportunities for views. Another important factor is site circulation, including movement from the street through the house to the landscape.

As Barbara Hawthorn avers, “Art is a focal point, introducing color, form and visual excitement. Without it, a home will lack soul no matter...