Diners navigate a patio boasting seating and games on their way to The Choptank, a fish and crab house in historic Fells Point.

Shucked oysters from The Choptank. 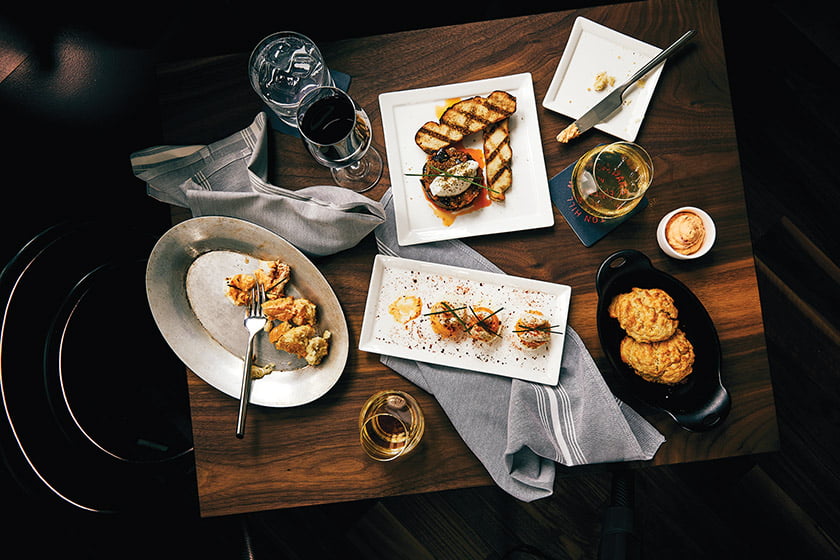 Guests at The Tilted Row will enjoy specialties such as Moorish eggplant. © Steve Visneau

An Appetite for Baltimore

Editors’ note: Just before press time, Maryland restaurants were officially closed in response to the Coronavirus pandemic. We are sharing these new dining spots with the hope that our readers will be able to enjoy them soon.

In fact, two recent arrivals have drawn the attention of national magazines: the French bistro Le Comptoir du Vin and True Chesapeake Oyster Co., which boasts its own oyster farm. The bragging rights of these welcome additions bode well for other Baltimore outposts. Meanwhile, Atlas Restaurant Group continues to make a big splash with a portfolio of dining rooms in Baltimore, Houston and Florida. The group’s partners have an unstoppable vision for how to tempt our palates; their latest local spots include The Choptank, a fish and crab house, and the Mexican-inspired Maximón. On a smaller scale, The Tilted Row opened up shop in historic Bolton Hill, luring customers with a pleasing gastropub vibe.

All signs point to Baltimore moving up the culinary ladder.

THE CHOPTANK
In September, Baltimore’s newest crab house started cracking crustaceans in a renovated building formerly part of Fells Point’s historic Broadway Market. Alex and Eric Smith of Atlas Restaurant Group, who operate several local restaurants including Ouzo Bay and Maximón (see page 14), joined forces with Vasilios “Bill” Tserkis of Captain James Landing on the project. The result? Crab-picking has never been so much fun. Diners enter through an archway to a patio with an outdoor bar, dining tables and games, including ping pong, foosball and cornhole.

Inside the space designed by Baltimore-based Patrick Sutton, wooden ceiling beams and vintage photos of Fells Point maintain ties to the past while creating an updated atmosphere with a tile floor, an area for live music and booths and tables for digging into seafood. Chef Andrew Weinzirl’s menu, featuring classics such as crab cakes, pit-beef cheesesteak and Eastern Shore fried chicken, contributes to the flavor of the place, while decadent Berger Cookie bread pudding pays homage to the hometown German bakery. Welcome to Baltimore, hon. 1641 Aliceanna Street, 443-707-3364, thechoptankbaltimore.com

THE TILTED ROW
The handsome gastropub made its debut last summer in historic Bolton Hill, a neighborhood of quaint 19th-century townhouses and mansions. The name reflects the asymmetrical rows of homes along its tree-shaded streets. Located on the lower floor of The Jordan apartment building, the restaurant’s interior gleams with a quartz-topped bar, bright windows, wood tables and blue-leather booths. And while clever cocktails and assorted beers and wines deliver the pub theme, the eclectic menu by chef Andrew Thomas, formerly of The Elephant, plays its own starring role.

TRUE CHESAPEAKE OYSTER CO.
Not every restaurant works with its own oyster farm, but True Chesapeake does—and what a collaboration it is. Farmer Patrick Hudson, who raises bivalves in Southern Maryland, joined up with Nick Schauman of The Local Oyster and chef Zack Mills, formerly of Wit & Wisdom in Harbor East, to showcase his sweet and slightly salty Skinny Dippers and Huckleberries at a restaurant housed in a former mill on the banks of the Jones Falls.

The soaring space designed by Kate Giese of DC-based KGID features a wraparound bar made of crushed oyster shells and custom lighting installations that call to mind the frosted glow of raw pearls. A key team member is general manager Chelsea Gregoire, who was named “Beverage Director of the Year” by Esquire magazine. She’s come up with adventuresome cocktails, an extensive wine list and local beers to complement the chef’s menu, which includes oysters, several fish, including the invasive snakehead, slow-braised short ribs and, of course, crab cakes. 3300 Clipper Mill Road, Whitehall Mill, 410-913-6374, truechesapeake.com

MAXIMÓN
Executive chef Colin King, an alum of New York City’s trendy Mexican hot spot Empellon, has brought some stellar cooking skills to one of Atlas Restaurant Group’s newest venues, located in the Four Seasons Hotel Baltimore in Harbor East. The group tapped Patrick Sutton to design this eatery, which boasts a ringside seat to the harbor. Named after a Mayan deity, Maximón exudes sophistication with stone, wood and marble details amid a tamed jungle of greenery.

You can count on handmade tortillas, an assortment of ceviches (including live scallop), tacos packed with fillings like wagyu and oxtail, entrees (do try the Portobello fajitas) and a calorie-worthy tres leches cake with prickly-pear sorbet. Tequila flights, Mexican-inspired cocktails and other beverages are indulgences to enjoy at the bar or with a meal. A private tasting room is available for food-and-drink pairings. In the warmer months, diners can enjoy the restaurant’s offerings in the Spanish-styled courtyard with seating, fountains and a bar. Be sure to check out the schedule for live mariachi music. Four Seasons Hotel Baltimore, 200 International Drive, 410-927-3020, maximon
restaurant.com

LE COMPTOIR DU VIN
Getting reservations at this tiny, French-inspired bistro has been a challenge since it opened in 2018, but scoring a precious seat became even more daunting after Bon Appétit and Esquire named it to their best new restaurants lists last year. But do persevere—dinner at this Station North hot spot is worth the wait. Co-owners Will Mester, chef, and Rosemary Liss, front-of-the-house greeter and server, have recreated a neighborhood eatery that the couple fell in love with in Lyon, France.