An antiqued-brass chandelier from Visual Comfort hangs over an RH table in the dining area.

An arched window was installed above the sink and an arched doorway now leads into a wine room.

The dining area enjoys views of the creek as well as access to the deck and lawn.

The pendants in the kitchen are by Lantern & Scroll and the faucet is by Waterstone. 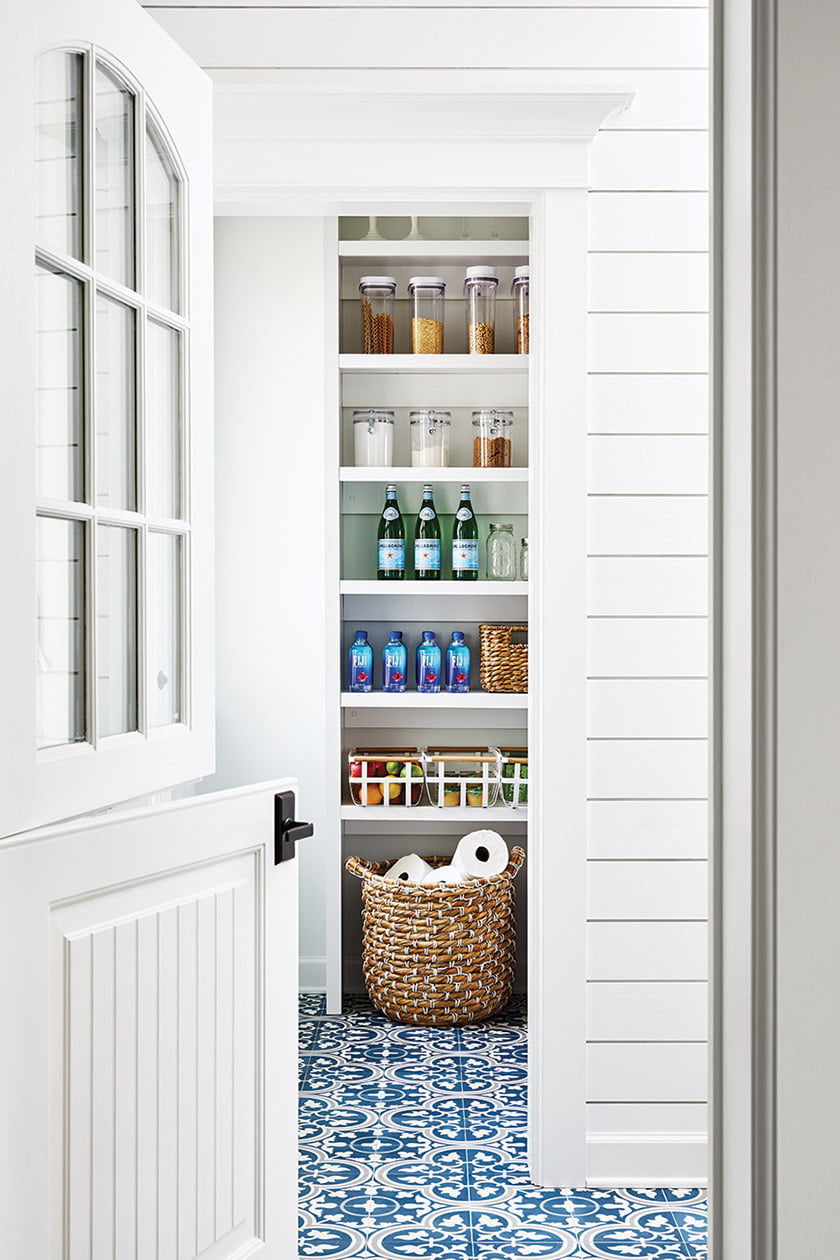 The renovation also converted a sunroom off the kitchen into a much-needed pantry and mudroom.

In the family room, sofas from Arhaus and a Stark carpet get a punch of color from throw pillows and chairs in a blue check.

Tiffani Johnston’s first thought upon moving into her family’s current Leonardtown home was that the kitchen was dark. It lacked windows to take in its views of a backyard creek, which meanders all the way to the Chesapeake Bay. Its cherry-wood cabinetry and pine floors’ orange undertones were not her cup of tea. She envisioned a white kitchen with a lighter, airy look.

“We’re your standard, busy family on the go,” says Johnston, who shares the residence with her husband Peter, an orthopedic surgeon, three children aged 10 and under and a large (and growing) Bernese-poodle puppy. They also have relatives living nearby. “We can easily have 10 or 20 people here on a Wednesday night,” she states. “The original kitchen had a peninsula bar that cut the dining room and kitchen in half. I just didn’t like the flow.”

The Johnstons decided to embark on a kitchen renovation under the guidance of Paragon Properties and interior designer Kate Abt. The project, which evolved over five years, not only transformed the dated kitchen but also the sunroom and living room. Eventually, the ground-floor owners’ suite and the children’s bedrooms upstairs were also overhauled.

Though the 2006 home, which Abt describes as “coastal modern,” already had an open floor plan, many of the rooms simply didn’t function well for her clients. In the kitchen makeover, says Abt, “the jumping-off point was an arched window that we installed over the sink. It became a beautiful focal point that was carried over to the arched entryway into a new wine room.”

Prior to the remodel, the family primarily used the home’s neglected front living room, where a desk had become a catchall for paperwork, as a pass-through to the main entry. “They had a bar cart that was packed, so we decided to make the living room into a wine room—an entertaining space that would be overflow for the kitchen,” Abt notes.

The kitchen was completely gutted. To make space for the large island that her clients requested, explains Abt, the renovation bumped out the kitchen by two feet, thereby accommodating a wall of cabinetry and the sink under the arched window. Additional windows were installed on either side of the French doors in the adjacent dining area to bring in more light. The builder replaced existing moldings, which were too small for the room’s scale, with a statement-making coffered ceiling. The team also altered the opening between the dining area and family room, echoing the arches of the new window and door to the wine room.

But the most game-changing alteration of the project was the conversion of the sunroom into a handy mudroom and pantry. Used as a playroom when the kids were small, the area had become a dumping ground for toys now that they are older. “Having a pantry and mudroom for a family of five with a dog is essential,” declares Abt. The space features a durable concrete-tile floor and hooks and cubbies where the kids can stow belongings. There’s also a Dutch door— something Johnston had always wanted—that’s especially useful when the puppy needs a timeout.

Having transformed the interiors to be more functional, Abt set about making them beautiful. “These clients love fashion, and they love the combination of blue and white with pops of pink,” she observes. “I would say their style is modern coastal, eclectic and full of things with meaning to the family.”

Pine floors were removed in favor of gray-toned oak. And Johnston finally realized her dream of a white kitchen with white cabinetry and Carrara marble backsplash and countertops. Brass fixtures impart warmth to the crisp white elements, as does the large walnut butcher-block top on the island, which was made by Johnston’s cousin.

“I wanted brass but in a classy way, not a ’70s way,” quips Johnston, who says there was some consternation in the family when she opted for an opulent gold faucet. “But once it was installed, everyone fell in love—even my husband.”

The interiors feature a mix of furniture the Johnstons owned and new selections by Abt, who focused on durability with kids and a dog under foot. Personal touches lend the home its warmth. A runner in the kitchen came from a trip to Peru and Johnston hauled the hand-painted-ceramic sink, now in the wine room, back from Mexico in her carry-on luggage. Johnston custom-ordered two watercolors in the family room from an artist on Etsy, then mounted them in gold-toned frames to echo the brass throughout the home.

“We went from dark wood to light and added huge windows—but it isn’t just the light that makes a difference; the renovation has made a difference in the home’s personality,” says Johnston. “When we come home, it makes us happy.”

Patrons longing for live entertainment and a festive meal can now head to Monarque in Baltimore’s Harbor East. This French-style steakhouse and cabaret opened...