During a recent renovation of this 1940s-era home, the original brick was painted white and the porch and new third story were clad in Kebony siding.

Warm wood elements temper the modern makeover, both outside and in. 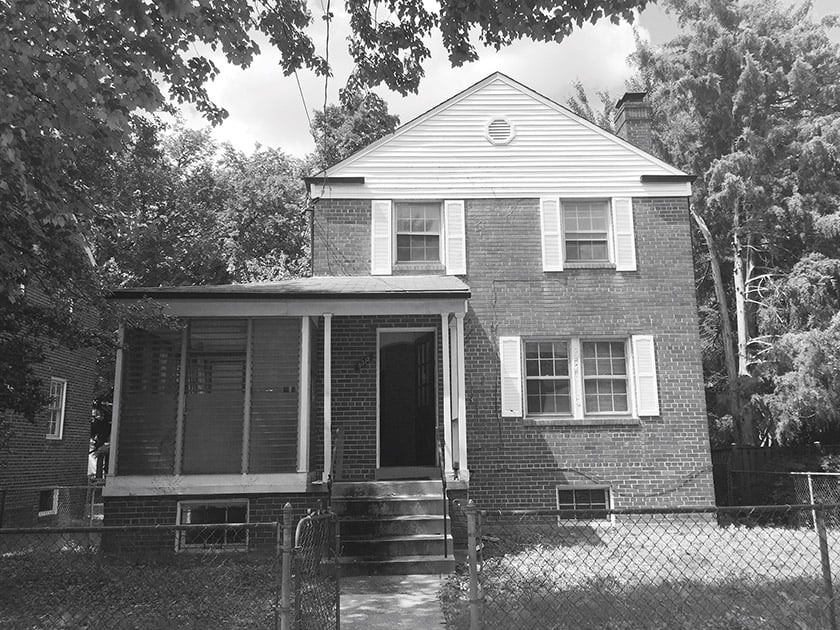 BEFORE: The existing façade and porch with jalousie windows.

Light- and dark-wood cabinetry from Reico Kitchen & Bath echoes the juxtaposition of colors on the home’s exterior. 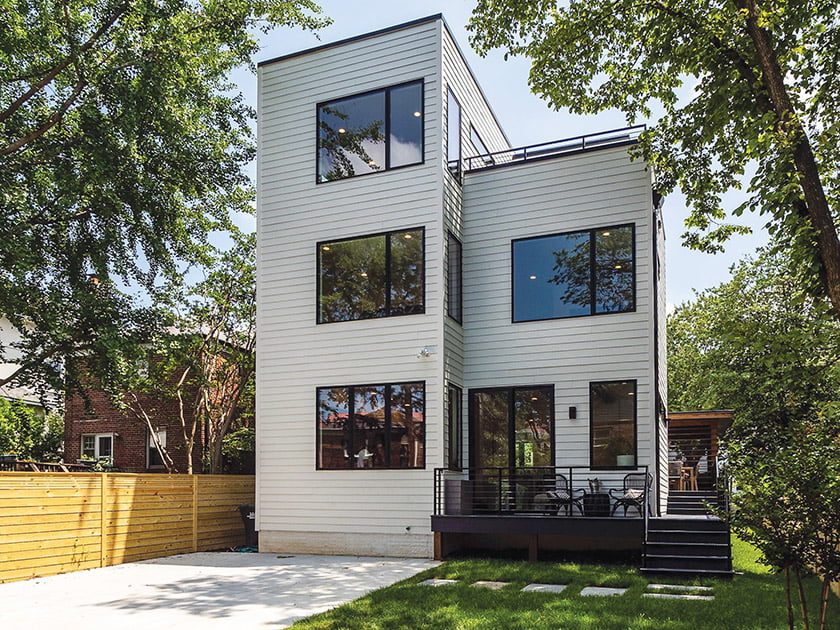 The rear addition combines two- and three-story volumes with the owners’ suite on the third level; windows and doors are from Pella.

A side terrace beckons.

A separate stairway accesses the third-floor owner’s suite. The bedroom and roof deck are on the left and the bath is to the right.

Mosaic Tile supplied the polished-porcelain floor and wall tiles, which were imported from Italy.

It’s a reality that small, older houses in DC’s established neighborhoods are steadily giving way to larger homes with contemporary layouts. In most cases, that means razing the original and building brand new. But Eric and Joseph Bernstein, Potomac natives who head a small development company founded by their father Brad, see value in preserving what they can. That was the case when Joseph, a real estate agent, wrote to his then-neighbors in Friendship Heights, asking if any of them might be willing to sell.

When the owners of a 1940s-era Colonial said yes, the brothers acquired the home with a plan to transform and resell it. “We loved the neighborhood—it’s got great walkability—and we knew the house and lot had potential,” says Eric, who heads design and building for BradBern Construction.

First, he called on DC architect Jonathan Kuhn to orchestrate a gut renovation and expansion that would celebrate the home’s original architecture while modernizing it for future owners. Kuhn was impressed with the Bernsteins’ willingness to allow him nearly free rein over the design. “They gave us poetic license to have fun with it,” he reflects. Kuhn’s plan preserved the original home’s footprint on the front and sides and replaced the existing porch, which had jalousie windows, with a new screened version; its wood slats cleverly reference their glass predecessors.

An addition stretches out in back, but the home’s original brick rear wall remains exposed in the new kitchen and family room. “The brick back wall lends to the story,” the architect explains. “You have a little bit of the history of the house on the interior.”

The real story, however, is about reimagining the house for future owners. “My vision called for a contemporary, treehouse-like feel,” Eric recalls. “Jonathan came up with a really good design pretty much on the first try.”

Kuhn sought to “stitch” the old and new together by cladding the third-floor addition in wood siding that comes down over the original brick façade, straddling the second-floor windows. Wood softens the new, modern look, relates Kuhn, pointing out that repeating brick on the third floor would have looked “relentless, and would [make the house] seem even taller than it is.”

In the back, he broke up massing to avoid a single, three-story “box” by designing two separate volumes: One is three stories high while the other is two levels topped with a roof deck. The addition contains the kitchen, family room and dining area on the main level, two new bedrooms (for a total of three) on the second floor, and the new third-floor owner’s suite.

Inside, Kuhn avoided the modernist default to large, open spaces. On the main level, he preserved the original front living room but created a widened foyer and stair hall, followed by a transitional area—a horizontal corridor housing storage closets, a powder room and a mud room with a side entry—leading to the family room and kitchen.

This area steps down from the original house, allowing for 11-foot ceilings. “We played with geometries to create different shapes and spaces,” says Kuhn. Eric Bernstein chose kitchen finishes that echo the home’s light and dark exterior.

Two separate staircases connect the levels—a move, says Kuhn, that fosters circulation and creates “a visual, physical and psychological break.” He upgraded the existing stair to the second floor, which now arrives at a large landing framed by a wall of glass. A new stairway around the corner leads to the owner’s suite.

Upstairs, Bernstein wanted to make a statement in the owner’s bathroom, envisioning “a big open concept, with a shower large enough so you don’t need a door.” It took four men to (carefully) haul the shower’s enormous glass partition up the stairs to set it in place.

Soon after the project was completed in 2019, Scott Nash, owner of Mom’s Organic Market grocery stores, purchased the home. “The layout was amazing and the windows are spectacular,” he enthuses. He was also taken with the roof deck, which is accessible from the owner’s suite, and the home’s industrial accents. The three bedrooms on the second floor perfectly accommodate his three children, ages 15 to 20, who have had space to spread out during the shutdown. Says Nash, “It’s just been a delight to live here.”

DRAWING BOARD
How do you soften a modern look?
JK: Incorporating materials such as wood makes a home more inviting. It’s associated with warmth and nature, and people respond in kind.

What do you think about open-plan living?
It’s intended to make a space feel larger, but in fact has the opposite effect. Defining spaces—not with small, dark rooms but with clues both built and implied—makes for a functional, livable home.

How can you modernize a Colonial?
It’s about transforming the bones without losing the “home.” First, visualize the new layout—floor plans, flow and function. Then, bring the outside in with windows and outdoor spaces—both enclosed and open.

Why not tear down and start fresh?
We enjoy the challenge of re-using an existing home and weaving it into the new. It may seem limiting on the surface, but it pushes you to look at things differently, to make something new out of something old.