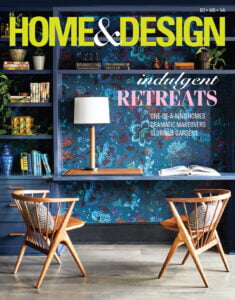 
Angular planes of stucco and metal just above large panes of glass. A steel ribbon runs up the front and over the roof. This contemporary townhouse looks like it belongs in Los Angeles, but it has been recently built in the Shaw neighborhood of Washington, DC, where urban renewal is sweeping away decades of neglect.

“We designed it as an example of what can be done in this city,” says architect Alireza Honarkar of the Silver Spring-based firm Division1 Architects. For the past four years, Honarkar and his partner Mustafa Ali Nouri have been pushing the design envelope, acting as both architects and developers for edgy residential projects that typically have trouble getting off the ground in conservative Washington. “Our attitude is, if we don’t get the client, we do it ourselves,” says Honarkar.

In 2002, the pair completed a development called Logan Heights on 10th Street, NW, where Honarkar, his wife Debi Fox, a photographer, and their two young sons, Shaw and Sterling, now live. The five contemporary-style townhouses helped to fuel the area’s gentrification, which is still ongoing as new condominiums and row houses rise next to older buildings.

Witnessing the neighborhood’s transformation on a daily basis spurred Honarkar to design and build the new townhouse with Nouri on speculation.

The property at 11th and W Streets purchased years ago, is located just around the corner from Honarkar’s home. “We thought of it as an opportunity to design a new type of housing that we would like to see in DC,” the 37-year-old architect says. “We see it as the new American urban house for someone who really cares about design.”

The three-story townhouse, completed this spring, is far bolder than the architect’s earlier development on 10th Street. Its stark, geometric planes of stucco, glass, and aluminum stand out from the traditional brick rowhouses around it, recalling Dutch architect Gerrit Rietveld’s 1924 Schroder house in Utrecht, an icon of early modernism built in similar circumstances. Like Rietveld, Honarkar designed the home to stylistically oppose the adjacent buildings while matching their scale and height. “Although it contrasts with the neighborhood,” the architect says, “we didn’t want it to be out of proportion.”

Simpler in the organization than is apparent from its segmented façades, the house is arranged with the living spaces and bedrooms placed on two floors above a glassy podium. This transparent ground floor is designed to function independently as a studio apartment, guest suite or office with its own kitchenette and entrance. It is flanked by a wooden deck and a long bench, a modernist take on the front porch.

Within the upper stories, the architect eliminated almost all barriers between rooms to maximize openness and daylight—the main challenges of townhouse design. “There are only four doors inside the house to close-off bathrooms and closets,” he notes. Unlike the typical row house, every level incorporates a multi-functional room and an outdoor space for hanging out. And conventional features, such as a formal dining room and tubs in the bathrooms, aren’t to be seen. “The people who will buy this house are probably years away from having a family or are empty nesters with grown kids,” explains Honarkar. “They don’t need a separate dining space and are probably too busy to soak in the tub.”

The main part of the house is entered from a staircase that leads up to a two-story living room framed at one end entirely by the glass. At the other end of the living room, the kitchen is one long counter fitted with appliances. Above the concrete countertop, a long, horizontal window takes the place of a backsplash to offer views of the neighborhood while washing dishes or preparing a meal. A built-in island of stained oak doubles as a dining table. Behind it, a space furnished with a leather chaise and a desk doubles as a guest room and an office.

On the top floor, the master bedroom overlooks the living room and shares daylight from its glass wall. It is screened from the adjacent bathroom by a floating partition with a low ledge. The porcelain-tiled bathroom is similarly open with a shower tucked into one corner and twin sinks sculpted from concrete.

From the bedroom, a catwalk made of metal grating extends along the side of the double-height living space to an outdoor balcony and a staircase leading to a rooftop deck. This top-level outdoor space, offering a peek at the Washington Monument, provides additional room for entertaining with a wood-paneled bar and plenty of room for tables and chairs. Extending over the bar is a continuation of the steel angle that juts up from the front façade, tying this space to the rest of the house.

The project recently won an award from the American Institute of Architects Northern Virginia Chapter. Since completing the house, Honarkar and Nouri have moved on to design a glassy, 26-unit condominium just a block away. In addition to bringing more contemporary architecture to Shaw, Honarkar hopes his housing will strengthen the stability of the neighborhood. “I like to design projects that make a difference,” he says.

The upper tow stories of the townhouse were designed in contrasting
stucco and aluminum panels.

On top of the house, a wooden deck and a bar set the stage for rooftop
parties.

Floors throughout the main spaces are covered in Brazilian walnut.

An island next to the kitchen serves as the dining table.

The guest room-office focuses on a Mies van der roe-designed chaise
and a Billy Colbert painting.

The master bedroom is separated from the bathroom by a glass and
stained oak partition.

Cast-concrete sinks and porcelain tile in the master bathroom convey
the feeling of a spa.

Natural Harmony
A design team transforms a dark and dreary Easton dwelling into a modern, light-filled retreat
Casual Chic
A Richmond rambler becomes a stylish venue for entertaining, inside and out
Tiny Jewel Box
Kerra Michele Huerta revives a faded Logan Circle row house with chic furniture and art and a clever new layout
HOME&DESIGN, published bi-monthly by Homestyles Media Inc., is the premier magazine of architecture and fine interiors for the Washington, DC, Maryland and Virginia region.