The designer brings a refined sophistication to his work.

He revived a living room with a reflective Phillip Jeffries wall covering on the ceiling. 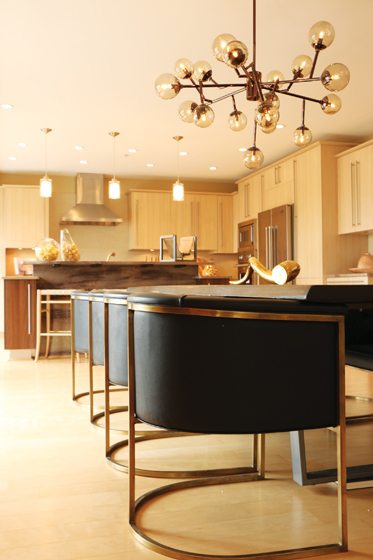 In a penthouse model in Norfolk, Byrd tapped into mid-century modern style.

Hot Talent Kenneth Byrd Kenneth Byrd knew he wanted to be an interior designer from the time he was a boy rearranging the furniture in his parents’ Virginia Beach home. He eventually settled in Richmond, where a background in visual merchandising and real estate led him to staging homes on the market. Then a developer hired him to oversee the renovation of a historic warehouse into luxury condos—a project that launched his design career.

He founded Kenneth Byrd Design in 2010 with a focus on both commercial and residential work. After a couple of years in Richmond’s historic Fan District, the firm moved to the “grittier” Shockoe Bottom area. Now the head of a five-person studio and a storefront (open by appointment), Byrd brings an unexpected, modern sensibility to the city’s traditional landscape. “We have an aesthetic that goes against the grain of traditional Richmond,” he says. “Our clients want that city edge.”

However, Byrd and his team approach historical projects with respect. “We don’t come in and strip down a 100-year-old home,” he explains. “We want to embrace the age of the home and celebrate its architectural features.

“Design is a collection of styles and flavors,” he continues. “I definitely like ‘old meets new.’ Space has more soul when things are collected, they come from different eras and everything has a story.”