A winding lane meanders through pastures to the home, built in 1948.

Wolf tends herbs and vegetables planted in raised beds on the property.

A Lacornue stove with copper trim takes center stage in the kitchen.

In Wolf’s office, contractor Jeffrey Bayer added a stone hearth and mantel to the fireplace. 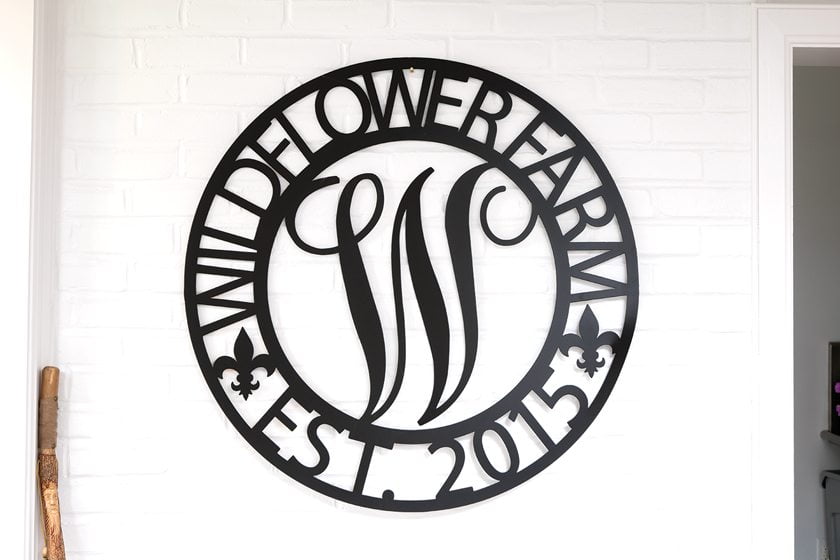 A friend gave Wolf a Wildflower Farm nameplate that hangs outside the kitchen.

A painting by contemporary artist Jeffrey Terreson hangs in the living room.

Another painting by Jeffrey Terreson adorns the entry hall.

A framed chef’s jacket was presented to Wolf after she prepared a luncheon at the White House.

Ever since she moved to Baltimore 22 years ago, acclaimed chef and restaurateur Cindy Wolf has been looking for a dream house with enough land for her to plant a large garden and take up farming. Last October, she found it in Sparks, Maryland, just a 30-minute drive north of the city from her flagship restaurant, Charleston.

The house is a charming, light-filled rambler of worn, pinkish gray brick. It is situated on 15 acres of land as green as an Ireland postcard, rife with mature trees, more than a hundred boxwoods and expanses of neatly trimmed lawn. “I became addicted to the place from the moment I saw it,” says Wolf, who dubbed it Wildflower Farm soon after moving in.

Turning onto the split-rail-fence-lined lane that accesses the pear-shaped property, you first catch a glimpse of four raised garden beds and a pine barn, rebuilt by previous owners in 2014. Design elements such as a tin roof, reclaimed columns and beams and Lancaster County fieldstone transform a utilitarian edifice into a chic out-building.

Constructed in 1948, the four-bedroom house overlooks the breathtaking Western Run Valley. Barely visible among the greenery, it blends seamlessly into the landscape rather than intruding on it.

To update the home, Wolf tapped contractor Jeffrey Bayer, who renovated the kitchen in her previous house in Baltimore’s Roland Park. First, he updated the HVAC, replaced the skylights and brought electrical wiring up to code. Flooring was repaired throughout and much of it replaced. A bathroom off the kitchen was completely remodeled. To make an office, beams and wood paneling were removed from a former family room to create height and openness and Bayer refaced its red-brick fireplace—one of four in the house—with fieldstone and slate.

Wolf tackled the interiors herself, creating a sophisticated mélange of new and antique furniture along with a blend of hard and soft natural materials, from metal, wood, glass, and stone to distressed leather and velvet. What was a formal dining room between the living room and kitchen is now a cozy den. Meanwhile, Wolf turned a former seating area in the back of the house into the dining room, taking full advantage of the mountain views its French doors and floor-to-ceiling windows offer. A monastery dining table, French dining chairs upholstered in charcoal velvet and a haunting painting of a young woman create an elegant backdrop for dinner parties. The first one Wolf hosted, for a friend’s 50th birthday, featured zucchini carpaccio, roasted duck magret, braised beef short ribs and many bottles of Châteauneuf-du-Pape.

A 1987 graduate of The Culinary Institute of America Hyde Park, Wolf carved a career path from Charleston to Knoxville, to Washington, DC, and finally to Baltimore in 1995, where she operated Savannah with her then-husband, Tony Foreman. Two years later, they opened their own restaurant, Charleston, where Wolf’s refined Low Country cooking has earned her five James Beard nominations for Best Chef, Mid-Atlantic. Now divorced, the two remain business partners and co-own six Baltimore-area restaurants, including Cinghiale and Pazo, plus two wine boutiques.

Wolf’s home kitchen is a professional’s paradise. “I hope never to leave this house, so I did the kitchen the way I wanted it,” she says. That includes not having a dishwasher or overhead cabinetry, which she finds confining. She stores her Raynaud wedding china in one étagère and Riedel crystal stemware in another; Wolf uses both collections daily and washes everything by hand. “I live by myself. I have these nice things and I want to use them,” she reasons. “If I had a family, I’d have a dishwasher.”

There are two work tables in stainless steel (so the chef can put hot pans directly on them), plus a marble one for pastry. The restaurant-grade stainless-steel sink is so deep she can scale a fish in it or stack dishes out of sight during a dinner party. Gleaming copper cookware hangs from a ceiling rack and Staub cast-iron casseroles are on display in a corner pot rack, a nod to one in Mrs. Patmore’s kitchen on “Downton Abbey.”

The apple of Wolf’s eye is her Lacornue CornuFé gas range with polished copper trim and a matching hood. The ornate cast-iron backsplash, a gift from Bayer, originates from a fireplace in Wolf’s 1905 Roland Park house.

Wolf is particularly proud of her garden, where she grows herbs, vegetables, fruit, and flowers. “The idea is to be able to wake up each morning and pick things to use at Charleston to inspire the daily menu,” she says. Someday, she also hopes to raise chickens and sheep and keep horses on the property.

For the chef, this way of life is a deep commitment. “I believe that we need to protect the land, particularly farmland,” she says. “Owning as much of it as I could be always my dream.”

David Hagedorn is a Washington, DC, writer. Photographer Geoffrey Hodgdon is based in Deale, Maryland.

With enough space and the right location, a weekend retreat can be the perfect vehicle for bringing a family together. Embracing this notion, an...