Michael and Lisa Weiss share a moment on the custom banquette in their breakfast room/kitchen. 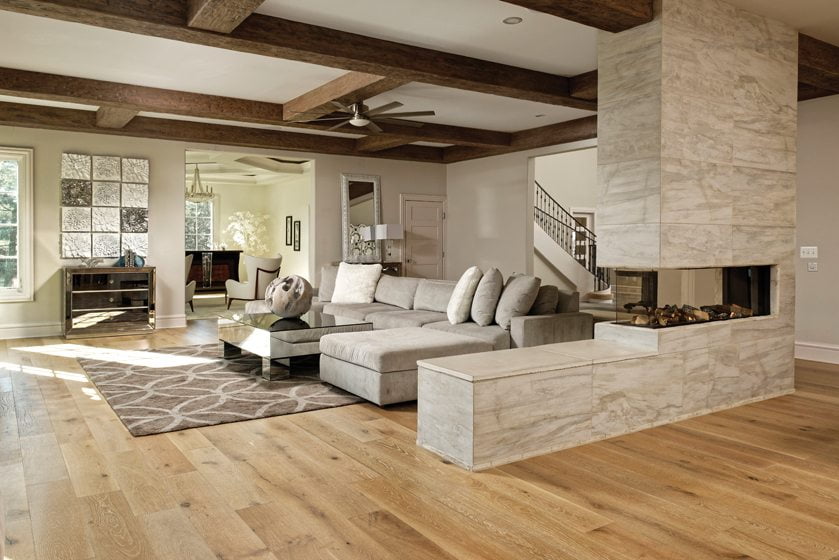 A frameless Lucius fireplace in a wall of porcelain tile separates the kitchen and the family room. 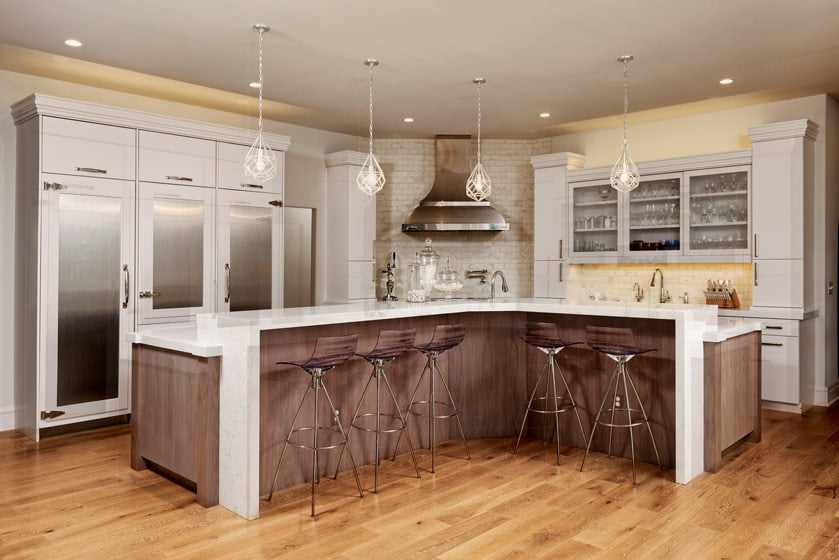 Lisa Weiss selected finishes in the kitchen, where a refrigerator and freezer flank a central pantry.

Textured concrete tile creates a backsplash behind the Thermador range. 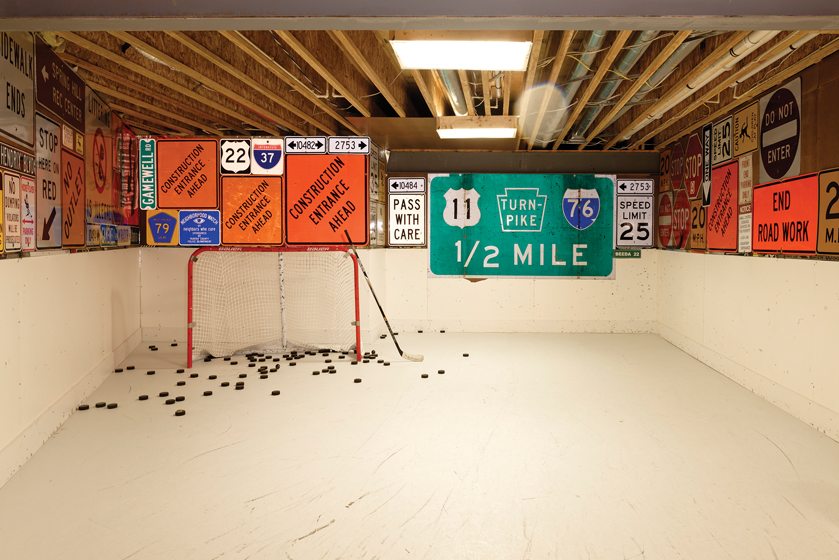 A room in the Weiss basement contains synthetic-ice flooring so son Christopher can practice shooting pucks.

The family performed in the 2015 “Family Skating Tribute.”

Weiss's home gym displays medals, a skate blade from the 2002 Salt Lake City games and the Olympic torch he carried through Alexandria.

Father and son train at a Reston rink.

A stone-covered front entry and wood beams embellish the façade.

A two-story foyer, which opens to the dining room. The mirror is from Z Gallerie.

Lisa Weiss designed the master bath with a custom vanity, marble flooring and a Eurofase chandelier.

When he’s not pulling off perfect triple lutzes on the ice or hosting star-studded skating shows, two-time Olympian Michael Weiss can be found studying house plans and visiting construction sites. In 2009, the Fairfax, Virginia, native founded Airleen Homes, a high-end residential building company. His largest project to date: the McLean residence he shares with wife Lisa and their children, Annie Mae, 18, and Christopher, 17.

On a gleaming January morning, Weiss was just back from a week on the skating circuit. During the 2017 U.S. Figure Skating Championships in Kansas City, he provided live commentary for the online IceNetwork. Then he flew to Ft. Lauderdale to co-host the “Colgate Skating & Gymnastics Spectacular” with fellow Olympian Kristi Yamaguchi (airing on ABC February 18 and March 4). And he still performs, most recently last fall during a weeklong tour in Brazil.

“I love skating and being a part of it,” he says. “Then, coming home I quickly change hats.”

Life in the Weiss residence revolves around a steady stream of visitors—from teenagers jumping on the trampoline to adults celebrating Michael’s recent 40th birthday with a deejay (hidden speakers in the two-story foyer turn it into an instant dance floor). “I love action,” Michael says. “Whether it’s hockey or darts or throwing a football, I’m always doing something with the kids.” The family not only plays but frequently performs together on the annual “Musselman’s Apple Sauce Family Skating Tribute.” While Michael skates, Lisa and Annie Mae accompany him on vocals and Christopher on guitar (the show airs on ABC and their performances can be found on YouTube).

Though they were content in the former home that they built 14 years ago, the Weisses decided to start anew when they came across a lot for sale on a quiet cul-de-sac nearby. Lisa, whose Wine Cellar Company designs and installs custom wine rooms, had just completed a project in a client’s Alabama vacation home and was inspired by its French Country aesthetic.

The couple hired Alexandria architect Salvatore Benvenga to design their new home. “The house is a contemporary take on French Country style,” explains Benvenga. “We took classic elements of the look and simplified them while still capturing the essence.”

In decorating the interiors, Lisa put a contemporary spin on rustic style, adding a subtle dose of glamour. “Our former home was extremely traditional,” she explains. “We wanted to make this more modern—sort of rustic contemporary.” She honed in on comfortable, durable furniture and a neutral color palette enlivened with sparkle, from the Ralph Lauren metallic paint treatment in the dining room to the crystal-studded pendant lights over the kitchen island. “I love crystals,” Lisa admits.

The main level features a large, airy family room flanked by the expansive kitchen on one side and a bar room—the Weisses’ answer to a formal living room—on the other. There’s also a wine room of Lisa’s design, a game room and a large office that the couple shares. The lower level houses a finished living area, play spaces and even a skating room with a synthetic-ice floor where Christopher, a hockey player, can practice shooting. The upper floor accommodates four bedrooms and a well-equipped gym.

Michael grew up immersed in playing youth sports. His parents were champion gymnasts; his father competed in the 1964 Tokyo Olympics. Michael’s sister Genna excelled at diving while he and sister Geremi climbed the ranks in figure skating.

In the 1990s, Weiss’s mother Margie was taking an aeroba-funk class and introduced Michael to her instructor, jazz dancer Lisa Thornton, with at least one mission in mind. As Lisa now recalls, “He refused to take dance classes and Margie thought I could help him with artistry. Slowly over time, we fell in love.”

After they wed in 1997, Lisa continued to choreograph programs for Michael—a three-time U.S. champion and two-time World Bronze medalist. He skated in the 1998 and 2002 Olympics, ranking seventh in both. And over a 16-year period, he toured with “Champions on Ice” and “Stars on Ice.”

A segue from the glamour of pro skating to the grit of construction may seem like an unlikely leap. But, says Michael, both pursuits require “hard work, discipline and determination. These characteristics, which I learned through skating, can be applied to a business, a relationship or anything you want to accomplish.”

Lisa and Michael have passed this philosophy on to their kids. Annie Mae, a freshman at Penn State, played travel soccer in high school and Christopher plays U18 hockey with the Skipjacks in Pennsylvania. As Michael explains, “I tell my kids whether or not they become Olympic athletes doesn’t matter. The most I got out of skating was not necessarily the medals. It was the fact that you learn so much about challenging and testing yourself.”

In 2006, Michael launched the Michael Weiss Foundation to help aspiring athletes put their own skills to the test. “When I was young, my parents struggled to keep me training,” he recalls. “So I decided if I was ever in position where I could give back, I would.” Through annual ice shows held in local arenas, the foundation has awarded nearly $850,000 in scholarships to dozens of skaters, including Olympians Ashley Wagner and Mirai Nagasu and 17-year-old Nathan Chen—who Weiss watched take first place at the 2017 U.S. Nationals in January. Chen, 17,  is the first skater to complete five quadruple jumps in a single program. “It was pretty amazing to see him skate, let alone call it,” says Weiss, whose foundation has been supporting Chen financially since 2009.

Weiss, who also coaches hockey hopefuls in power-skating, is grateful for the opportunities the sport has afforded him, and enjoys passing on the lessons he’s learned. “For years, I skated six hours a day, six days a week. It was a full-time commitment,” he reflects. “There are really tough days that aren’t fun. But then you go out and get a standing ovation. All the hard work, sweat and tears are worth it when you realize you did your best.”

Photographer Bob Narod is based in Herndon, Virginia.