In the kitchen, Jinich and crew film an episode of “Pati’s Mexican Table.”

Jinich relaxes near the garden where she cultivates peppers, figs and herbs.

Sliding doors with wrought-iron details made in Mexico lead to the kitchen.

The chef can spread out in her efficient and inviting kitchen.

Avocados are a staple of Jinich's repertoire. 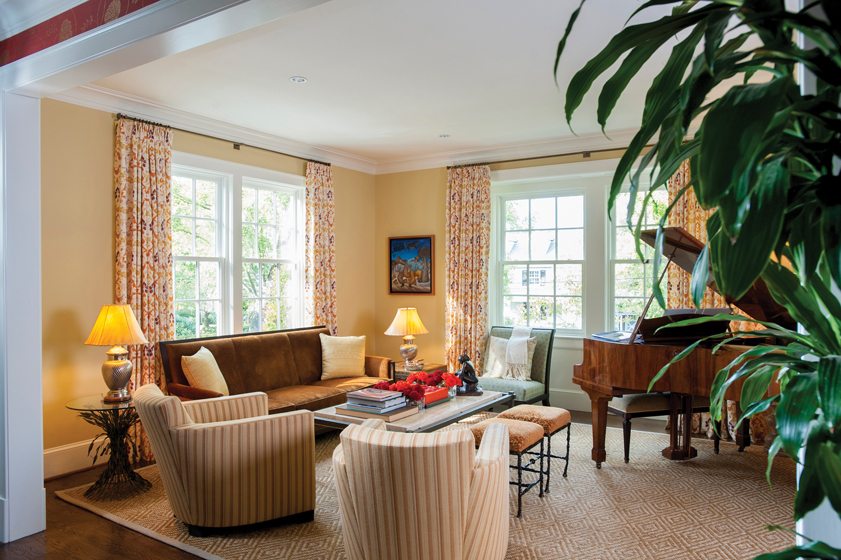 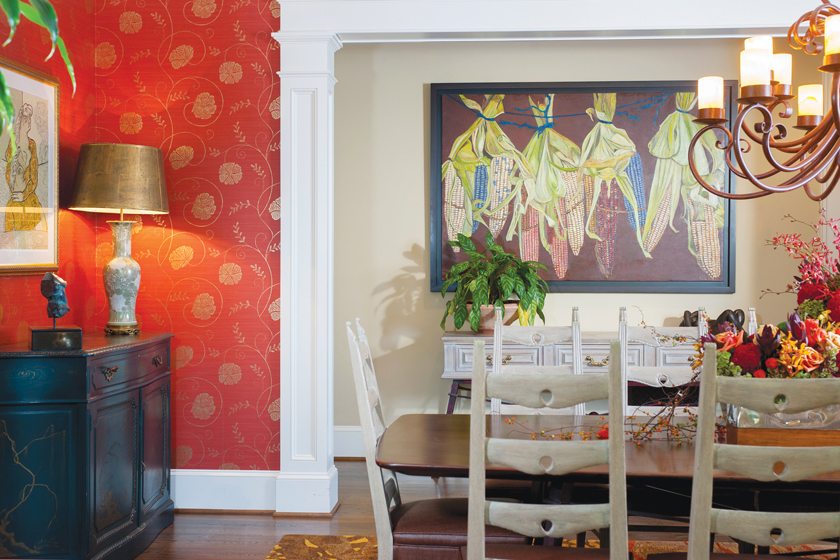 The painting in the dining room is by Pedro Diego Alvarado, grandson of Diego Rivera.

Pati’s HaciendaThe PBS series “Pati’s Mexican Table” transports viewers to exotic markets, farms and fine restaurants all over Mexico. But when the cameras turn to host Pati Jinich expertly steaming tamales or mixing up a redolent mole, she is most likely cooking in the sunny kitchen of her Chevy Chase, Maryland, residence.

The exterior—with its wrap-around porches and clapboard façade—complements its Cape Cod-style neighbors. But inside, Jinich’s home extends the warm embrace of a rustic hacienda. Shades of burnt orange and pale ochre weave a common thread through rooms filled with artisanal furniture, hand-painted tile, ceramics, and art from Mexico. The house has been as ideal a location for Jinich and her husband Daniel to raise their three sons (ages 11, 16 and 18) as it’s been a backdrop for her show, now entering its seventh season.

The kitchen is the hub of the action, whether Jinich is testing recipes, whipping up weeknight carnitas (the boys’ favorite) or entertaining. “If you come into our home,” she says with a winsome smile and a lilting accent, “you’re coming in as a family.” Laid-back parties start in the kitchen, with Jinich prepping appetizers around the island. In the dining room, meals are served family-style on a table that belonged to Daniel’s grandmother in Mexico City—where Pati and Daniel, who works in finance, grew up and married before moving to the States in 1997.

The Jiniches tapped architect George Myers of GTM Architects and Sandy Spring Builders to design and build their five-bedroom home in 2009 when their third son was on the way. On a trip to Mexico, they gathered family heirlooms and ventured to the town of Tlaquepaque to buy furnishings for their new abode. “We went crazy, ordering doors, chandeliers, tiles, and lamps and had it all sent in a container,” Jinich recalls. The finished home brims with reminders of Mexico. “Every piece in our house, down to a wooden spoon, has a story that’s meaningful to us.”

Little did she know when the home was under construction that she would eventually host a cooking show in its kitchen. In 2005, Jinich earned a master’s degree in Latin American Studies at Georgetown and soon landed her dream job at a prestigious Washington think tank. But she quickly realized that her mind was elsewhere.

“I always wanted to be an academic, but also always loved food,” Jinich muses. “I became nostalgic for Mexican dishes. When I was asked to do a paper comparing Peru’s and Mexico’s democracies, I started researching the differences between Mexican and Peruvian ceviche. I decided I needed to switch [careers].”

So she resigned and enrolled at Maryland’s recently shuttered L’Academie de Cuisine to learn the technical skills she needed. “I didn’t want to be a chef,” she reflects. “I wanted to continue what I was doing as a political analyst but in the world of gastronomy, to break myths about Mexican food and our history and legacy.”

The culinary grad was soon hired as a resident chef at the Mexican Cultural Institute in Washington. There she launched a series of tasting dinners that, after 11 years, is still going strong. When a WETA producer attended one and approached the charismatic chef to create a television pilot, the seeds of “Pati’s Mexican Table” were planted.

Every season of the show delves into a different region of Mexico. In April, the seventh season will take Jinich to Baja. “The cuisine of Baja is influenced by California, and ingredients there are very Mediterranean because of the weather,” she marvels. “They’re making fabulous wines, pressing amazing olive oils and the seafood is insane.” The Baja season debuts on PBS in September, and will eventually join previous seasons streaming on Amazon.

After filming on location in Baja, Jinich will shoot the cooking segments in her home kitchen, designed by Potomac kitchen designer Amy Collins. “I love my kitchen because it’s totally workable,” says Jinich, whose favorite tools are her eight-burner Viking range and Vitamix blender.

The educational approach Jinich takes on her show provides a refreshing diversion from the travails of reality TV. “I try in my work to be a platform for real discovery,” she reflects. “The core of what I do is building bridges between individuals, families, communities and, hopefully, countries because there are so many myths and misconceptions on both sides. Interaction in the kitchen is the noblest way to do it. It’s an easy way to connect with other people—and nobody’s going to say no to a fabulous plate of carnitas.”

In the mood to escape the current moment without leaving the nation’s capital? Ready to return to a reimagined past studded with grand architecture,...