The house spills onto a porch complete with a barbeque and space for al fresco meals.

Retaining walls mitigate the grade change to the street and create a plinth for the house to rest on. 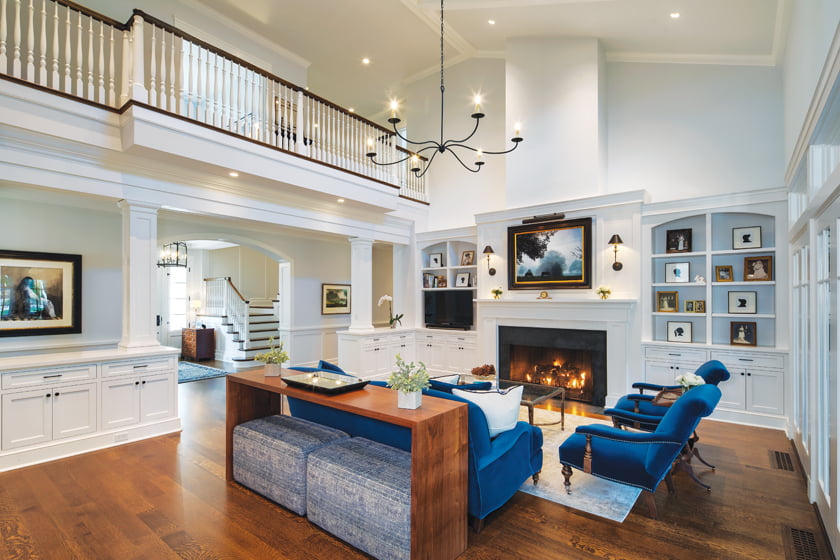 The entry foyer features a Circa Lighting lantern. 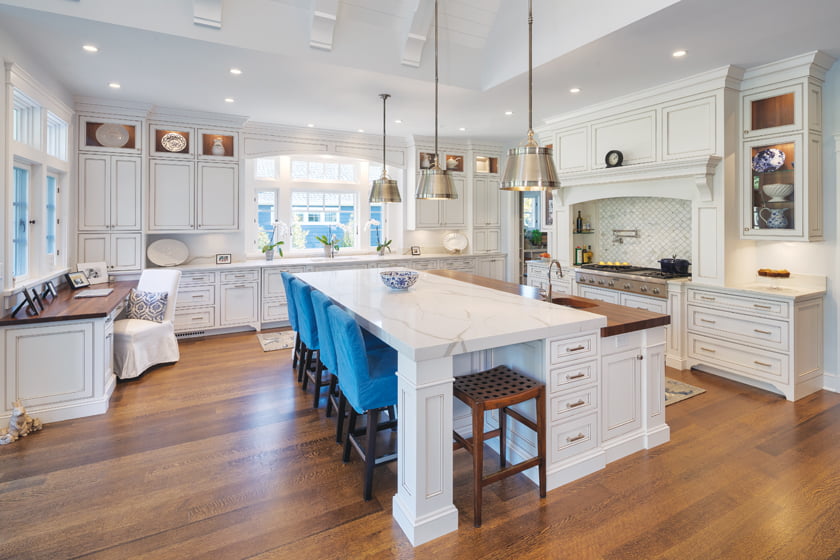 A massive island is perfect for both seating and serving; accents on the traditional white cabinetry keep it from looking sterile.

A wall of walnut cabinetry houses the double ovens and paneled fridge.

A petite porch sits off the kitchen.

The master suite features a bedroom in peaceful shades of blue.

The second-floor sitting area opens to a balcony with a view of the Severn River.

When Angela and Frank Ferrogine moved from Edgewater to Annapolis to be closer to work and family, they had the perfect plan. Frank found the lot they wanted on the Severn River near the Naval Academy Bridge and Angela drew a rough design that reflected their vision. But like all best-laid plans, theirs hit a snag. “I wanted the garage at the back of the house,” Angela explains, “but we ran into restrictions due to the bay critical area.”

Angela is a retired nurse with a talent for design. Frank owns auto dealerships. Fortunately, the couple had worked in the past with architect Leo Wilson of Hammond Wilson; they consulted him and found he was undaunted by the challenge. “When you depart from a design, I think it’s an opportunity to make something better,” he avers.

Wilson says this project was special—not only because of his longstanding, design-savvy clients, but also because the top-notch design team included interior designer Sandy Payne, Campion Hruby Landscape Architects and Winchester Construction. It was Bert Winchester who solved the issue of the garage, suggesting they put it under the house, accessed by a graceful sweep of driveway that goes below grade.

“Angela had a clear vision of how she wanted things organized,” says Wilson. “Once we figured out the technical challenges, everything came together.”

The Ferrogines wanted this home to be a place where they could age comfortably, with a first-floor master suite and a universally designed bathroom. The house also needed to accommodate their four children and growing brood of grandchildren, with large rooms for gathering, two bedrooms on the second floor and entertainment areas in the basement. “I call this the holiday house,” says Angela. “It’s where we spend holidays and Sunday dinners. There are at least 15 of us and we have 70 people over every Christmas Eve.”

Wilson’s design interprets traditional Shingle construction with symmetrical roof forms broken by a swooping roofline that accommodates a stair tower and kitchen. The house is organized around an axial corridor that leads into the living and dining rooms and creates a desirable flow for entertaining. The corridor is flanked by the master suite and kitchen, both featuring timbered cathedral ceilings. “The heavy timbers help draw the eye up, but the cross-members mitigate the space so you don’t feel like you’re in a silo,” the architect explains.

Wilson put a premium on craftsmanship throughout the house, from heavy cap rails on the wainscoting to the deep portals between the rooms. Every detail is thoughtful, down to the built-in baby gates on the stairs that slide away like miniature pocket doors. “This is a house where less is more,” he notes. “It’s like a jewel box where quality is of the highest level and there aren’t any needless spaces.”

The busiest room in the house is the kitchen, which centers on a two-level island topped by quartz and walnut. “Angela wanted a bright, white room with lots of natural light,” says Sandy Payne. “It can be hard to make a large kitchen feel warm, but we were able to create a living space where everyone wants to be.”

Angela was integral to the home’s interior design, working with a calm palette of soft whites and blues anchored by wide-plank oak floors. While the layout is traditional, the openness and lightness of the spaces make the interiors feel timeless.

The kitchen and adjacent porch open to a backyard with a small street running behind. “The goal was to establish an expansive and useful lawn space that acknowledges the street but provides a boundary,” explains landscape architect Bob Hruby. A stone wall runs parallel to the house with a set of stairs in its center, creating a secondary entrance.

The relatively small lot emphasizes native species, with magnolia, viburnum, hydrangea and ilex softened by perennials and grasses such as echinacea, aster, heuchera, agastache and Siberian iris. Mitigating storm-water runoff was a significant challenge, solved by French drains and a rain garden. “We set the house at an elevation that worked for the basement garage entrance, the front door and the rear garden,” Hruby explains.

Wilson describes the home as “calm and ordered,” and from first entry there is a sense of peace. And while the communal rooms are large, the bedrooms are tellingly modest. This “holiday house” puts gathering as a family first.

Inspired by the natural beauty of the Potomac River, George Washington once wrote that no estate in America was “more pleasantly situated” than his...