The kitchen combines white-gloss cabinetry with a rustic-looking backsplash. 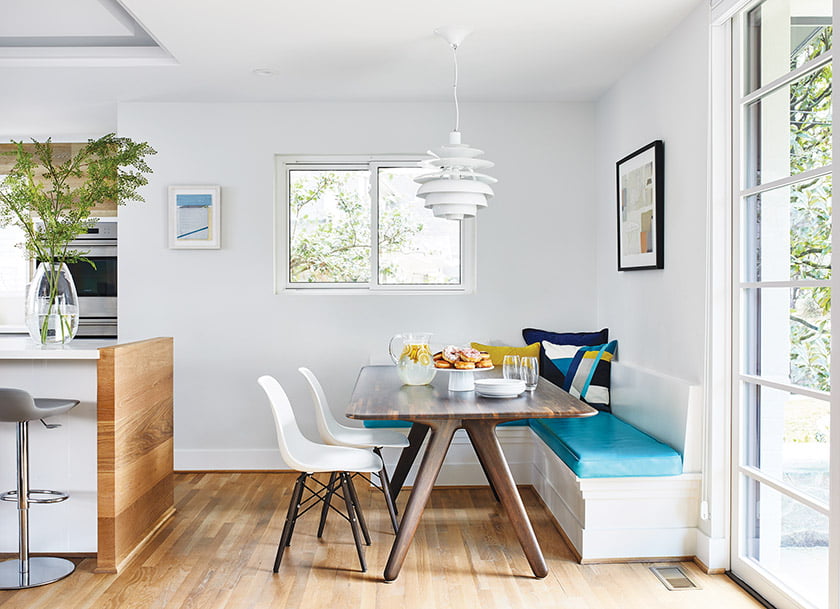 BEFORE: The home pre-renovation.

The kitchen includes an interior window into Erich’s office.

BEFORE: The kitchen, pre-renovation.

The foyer ceiling is lined in the same wood-look vinyl as the kitchen backsplash.

A glass door in the living room leads to Erich’s office.

A two-sided shelving and storage unit in a grid-like design serves both the family and living rooms.

The powder room mirror was custom-cut to accommodate the vanity by Durazza.

The shower in the enlarged master bath is lined in tile made with compressed newspapers.

Bethesda’s Tulip Hill, nestled into rolling hills above the C&O Canal and filled with its namesake tulip poplars, was at the top of Erich and Amanda Cabe’s list when they decided to move out of their four-story townhouse in DC’s Mount Pleasant neighborhood. “We wanted to spread out a bit, and we wanted a two-level house,” says Erich, a broker with Compass Real Estate. A circa-1957 rambler stood out to them for its ample (and flat) front and backyards—a plus for sons Max and Brooks, now five and seven. “But it needed some work. It was a typical ’50s house—very compartmentalized and chopped into tiny rooms.”

The couple turned to Anthony Wilder and the firm’s senior architect, Sean Mullin, for help transforming the dated home into a true modernist abode with airy spaces and light to invite its bucolic surroundings inside. It was clear from the beginning that the small rooms needed to be opened up, the roof vaulted for ceiling height and the windows enlarged. “We took cues from Mid-Century Modern architecture,” says Mullin, “but we didn’t change the footprint at all.” Similarly, they preserved existing window locations but made them larger.

As for determining the soul of the new design, Wilder instantly identified with Amanda, a stay-at-home mom who, like himself, grew up in California. “I’ve always been drawn to stucco,” she says of the material that’s more common amid the Golden State’s Spanish-influenced homes than on the Colonial-filled East Coast. Plus, Mullin adds, the state was home to mid-century master Joseph Eichler, whose residential architecture is distinguished by broad, sloping roofs like the one they opted for in the redesign.

Erich, the son of ski instructors, grew up on the slopes in Pennsylvania. His father is Austrian and his mother is from Vermont, so mountain life was in the family DNA. If it were possible to combine California cool with alpine comfort, the team sought to achieve it here, Wilder says. The new roof, as it turned out, closely resembles that of an Austrian ski chalet—though that wasn’t by design: Wilder originally chose it because it felt like the protective wings of a large bird. “We had a visceral feeling about the organic-ness of it,” he says, though it quickly became apparent that it bore the same lines as a classic chalet.

Inside, a gut renovation of the single-level home combined the kitchen and dining room into one space and converted a dated Florida room into Erich’s office. Grid-like shelving divides the living and family rooms, with staggered openings connecting the spaces visually. The project also added a Jack-and-Jill bath between the kids’ rooms and replaced a hall bath with a powder room off the foyer. The master bedroom was streamlined to make way for spacious walk-in closets and an expanded, updated bathroom.

Similarly, Mullin applied wood-like aluminum siding to a portion of the stucco façade to channel that warm chalet feel, but with none of the maintenance that real wood requires. “It’s a commercial product; Starbucks uses it,” the architect notes. Interestingly, it’s called Longboard siding—an unexpected reference to Erich’s passion for surfing and one of his sons’ favorite pastimes, skateboarding.

Also outside, Wilder expanded a front patio the Cabes had already installed so it would be accessible from the kitchen via new French doors, making impromptu entertaining that much easier during Front Porch Fridays, a neighborhood get-together introduced by the Cabes. He designed a visor-like roofline that stretches across the entry and patio to make the space more enjoyable despite its strong western exposure. “We put that little slice out there to keep the sun out of the front windows,” he says.

Wilder was on a mission to remake the entry into “a splash of awesomeness,” he says—triggered in part by a mistaken measurement for the new front door. Wilder’s team had ordered a standard 36-inch glass door, only to realize upon delivery that it was a half-inch too wide for the opening. The error turned out to be fortuitous, resulting in a decision to blow out the opening to 48 inches—the same width as the front walk and the glass opening above that fills the newly vaulted foyer with light. “The front entry is everything now,” Wilder says; as a bonus, the first door was reassigned to Erich’s sunny new office in back.

The finished home is exactly what Wilder and Mullin set out to achieve for this young, energetic family—and the project also won a Grand Contractor of the Year award in the category of entire house, $50,001 to $750,000.

The Cabes especially appreciate how Wilder and his team were able to incorporate details that channel both of their backgrounds. Says Amanda: “They combined what makes us both nostalgic. We got a nice blend of Mid-Century Modern—with Austrian roots!”

How do you translate a client’s personality into architecture?
While we are designing, I think, “How can I seize a moment in time?” Our design must have a lasting result so that it stays with our clients like a favorite childhood memory.

How do you achieve that result?
We ask clients where they travel, what they love in life—cooking? sports? theater?—and also what they want to change. We ask what their family life was like growing up, and also what are their present and future dreams.

What are some visual tricks to expand ranch-house spaces?
Scale of furniture is important—it can’t be too large or bulky for small space. You need lots of windows for light to create views and vistas through a house. In the Cabe house, high mirrors in the foyer create the illusion of space and light. And, where possible, expand ceiling height.