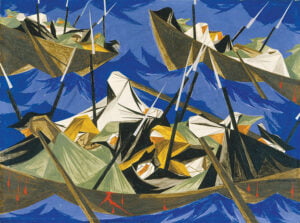 From 1954 to 1956, Jacob Lawrence painted a 30-panel series entitled “Struggle…From the History of the American People.” It depicts early decades of the republic through the words and actions of founding fathers as well as enslaved people, women and Native Americans. Assembled for the first time in 50-plus years, the panels—including We crossed the River at McKonkey’s Ferry... (inset)—can now be seen through a 21st-century lens. phillipscollection.org

HOME&DESIGN, published bi-monthly by Homestyles Media Inc., is the premier magazine of architecture and fine interiors for the Washington, DC, Maryland and Virginia region.