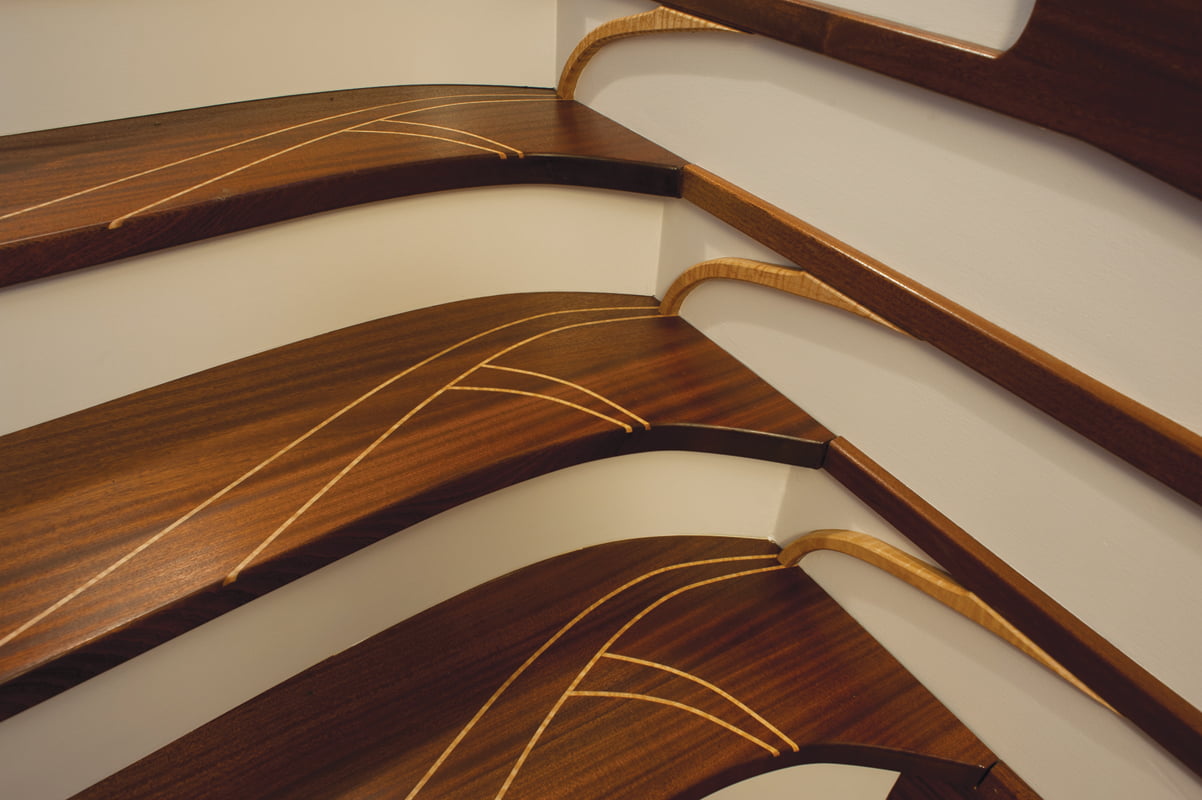 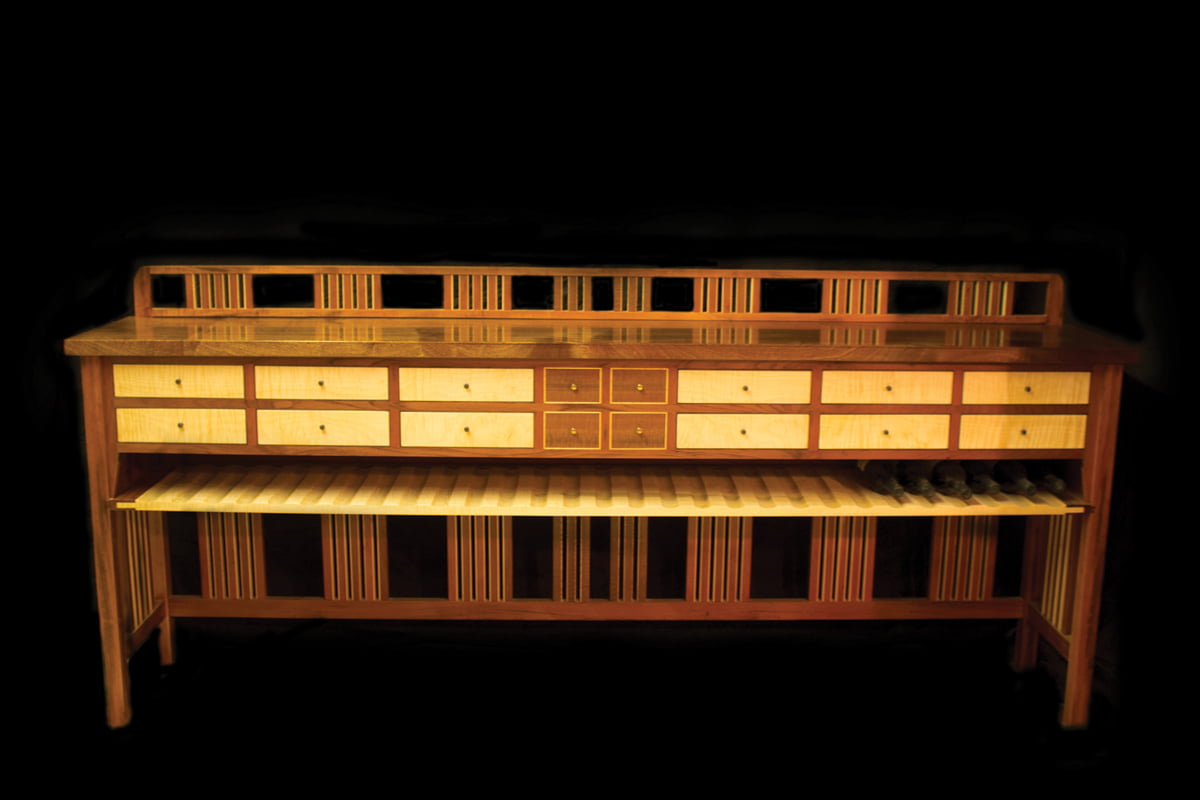 The Lynette wine sideboard was crafted out of solid mahogany, curly maple and congolo. 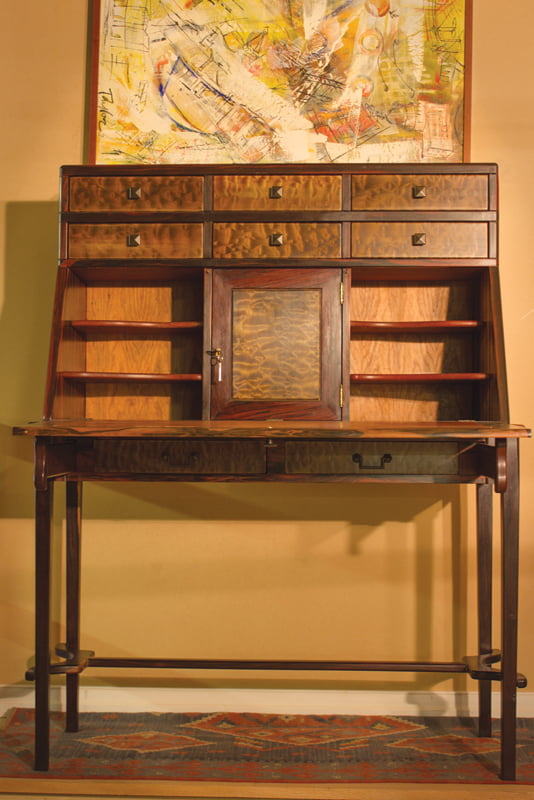 The Kaya secretaire is made from ebony, congolo, quilted poplar, cherry and leopard wood. The desk features a leather writing surface.

Art Meets Function Born in a bomb shelter in a small Israeli town near the Jordan River, Shlomi Abukassis grew up noticing everything—from beauty to destruction. He was drawing, dancing and acting by the age of two. And by his teens, he was dancing in lead roles at a prestigious drama school in Tel Aviv, where he paid for tuition by designing, painting and building sets.

Little did he know, that talent would become a vocation years later in his adopted town of Baltimore. Now a full-time woodworker, Abukassis specializes in custom furniture, cabinetry and built-ins for both commercial and residential clients.

“My artistic sensibility is rooted in the North African style: beautiful and intricate woods,” he says. “Building sets in school is where I learned I had an affinity for working in wood.” Today, his Baltimore studio, Kaya Furniture Design, is crammed with his creations, from secretaires, sideboards and cabinets to exotic stairs. Clients can marvel at the luster of Bolivian rosewood, curly mahogany, cherry and leopard wood—all of which create a sense of timeless tranquility.

Michelangelo could see the soul of a sculpture in raw marble; Abukassis does the same with wood. He approaches each piece by studying the graining of the raw material and envisioning the finished work after he has meticulously carved, joined, hand-sanded and varnished it. The result is a unique work of art. “Wood is alive, and the careful juxtaposition of colors, graining and form will produce a unique, graceful piece that becomes part of the family, to be used for generations,” he says.

After marrying an American actress and moving to the States in 1995, Abukassis apprenticed with former Baltimore woodworker Dennis Burns. While his marriage didn’t last, his affinity for woodworking did; Burns taught him how to coax the best from each species and specimen. “Dennis was my mentor, like a father to me,” says Abukassis. “After two years, he sold me his studio.”

Burns also introduced Abukassis to the late Baltimore restaurateur Peter Yagjian. “Peter gave me my first commissions after a look at my sketches: an armoire, a desk, a table and a new bar for his pub,” the artist recalls. “After that, the business kept on growing. Today, online orders come in from Texas, California, Michigan—all over.”

Abukassis invites clients to review his portfolio and describe their vision to him. “Each piece is designed in collaboration,” he explains.

Recently, he and his wife of 15 years donated a “Maddy” table to an auction to benefit The Light House, an Annapolis homeless shelter. Bidding was fierce: A state senator took home the prize while the losing party ordered a chair of her own because she liked it so much.

So what’s next for the woodworker? With his design table scattered with vigorous sketches of new works using ebony—his favorite wood—anything is possible. v

Writer Rosemary Knower is based in Baltimore. Kaya Furniture Design is open from
10 am to 3 pm on Saturdays or by appointment. 2300 Russell Street, Baltimore; 443-798-1045;
kayafurnituredesign.com

When clients purchased a rundown Soapstone Valley property, it was hidden behind undergrowth and dying trees, and a sloped front yard channeled water into...