Perched on a peninsula, the house enjoys panoramic views of Montana’s Echo Lake.

On the eastern side of the residence, the living room and deck face the Swan Mountains. 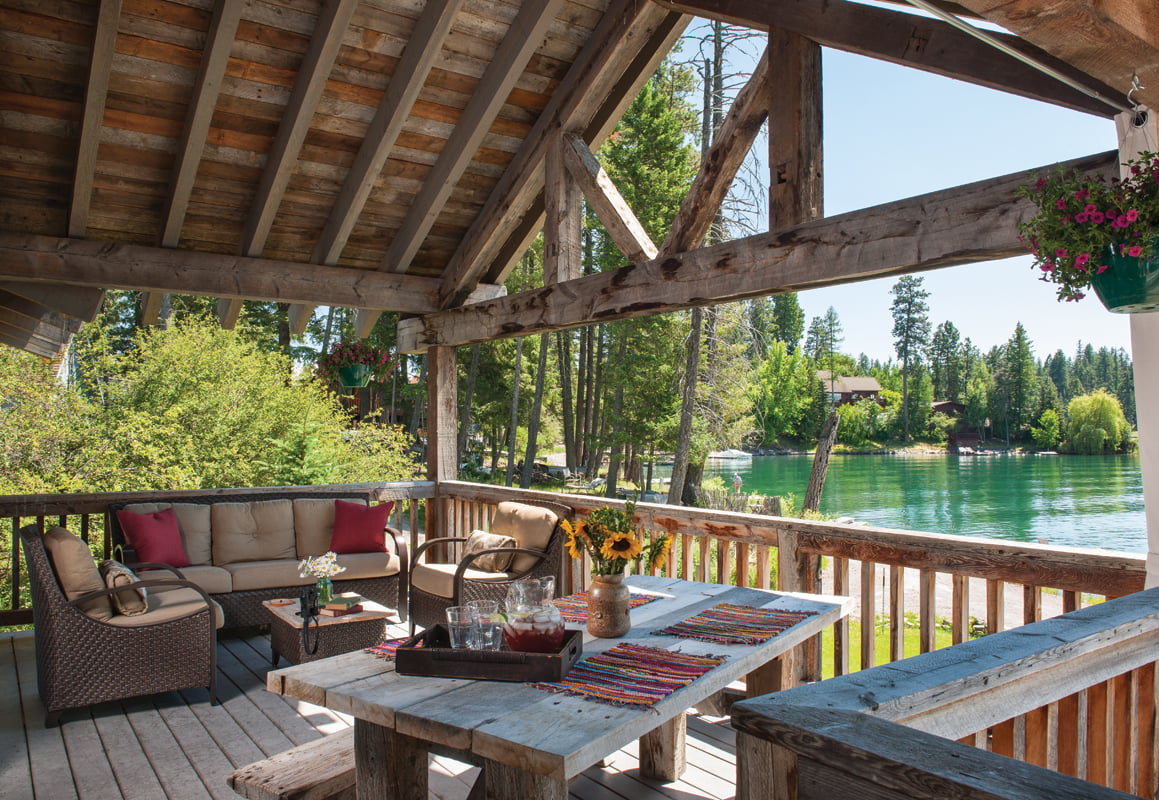 The family often gathers for meals on a new porch overlooking the dock.

BEFORE: Views of the back of the house reveal the home’s former masonite exterior.

The new entry stairs are clad in reclaimed wood. 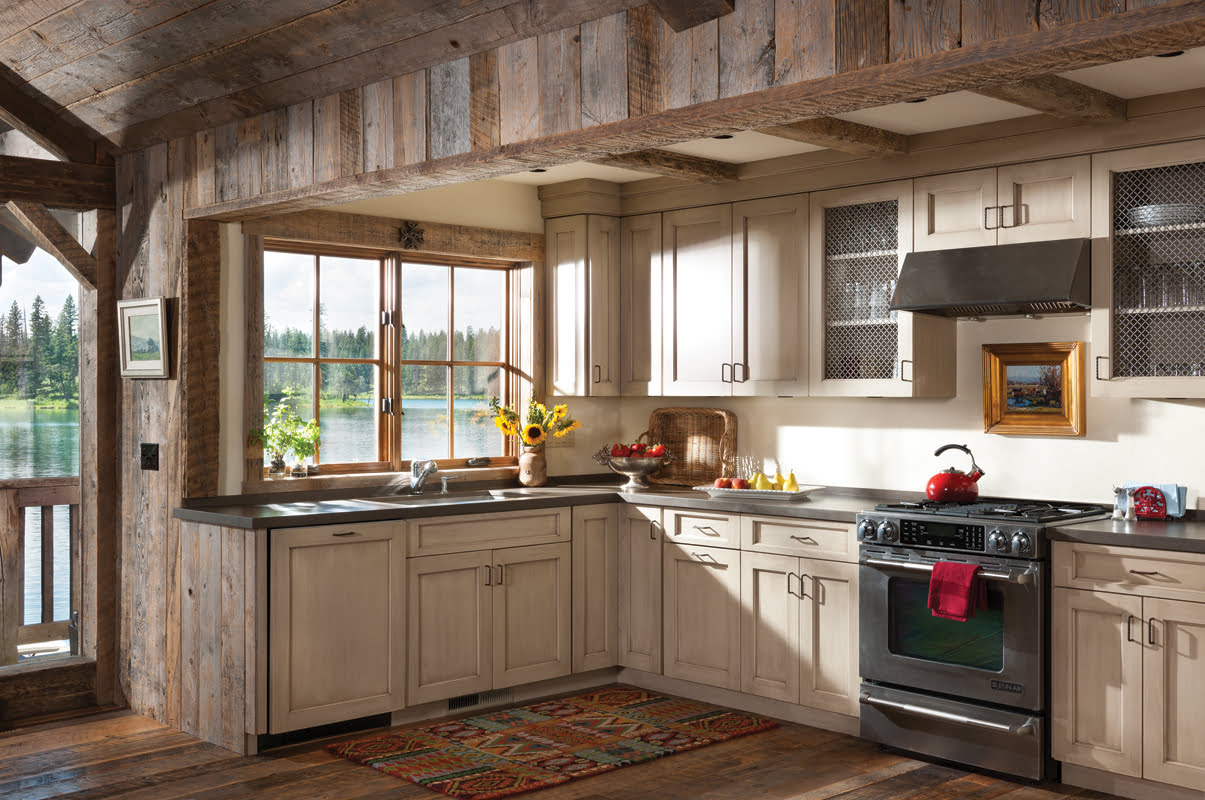 The kitchen has been upgraded with painted cabinetry and Silestone countertops. 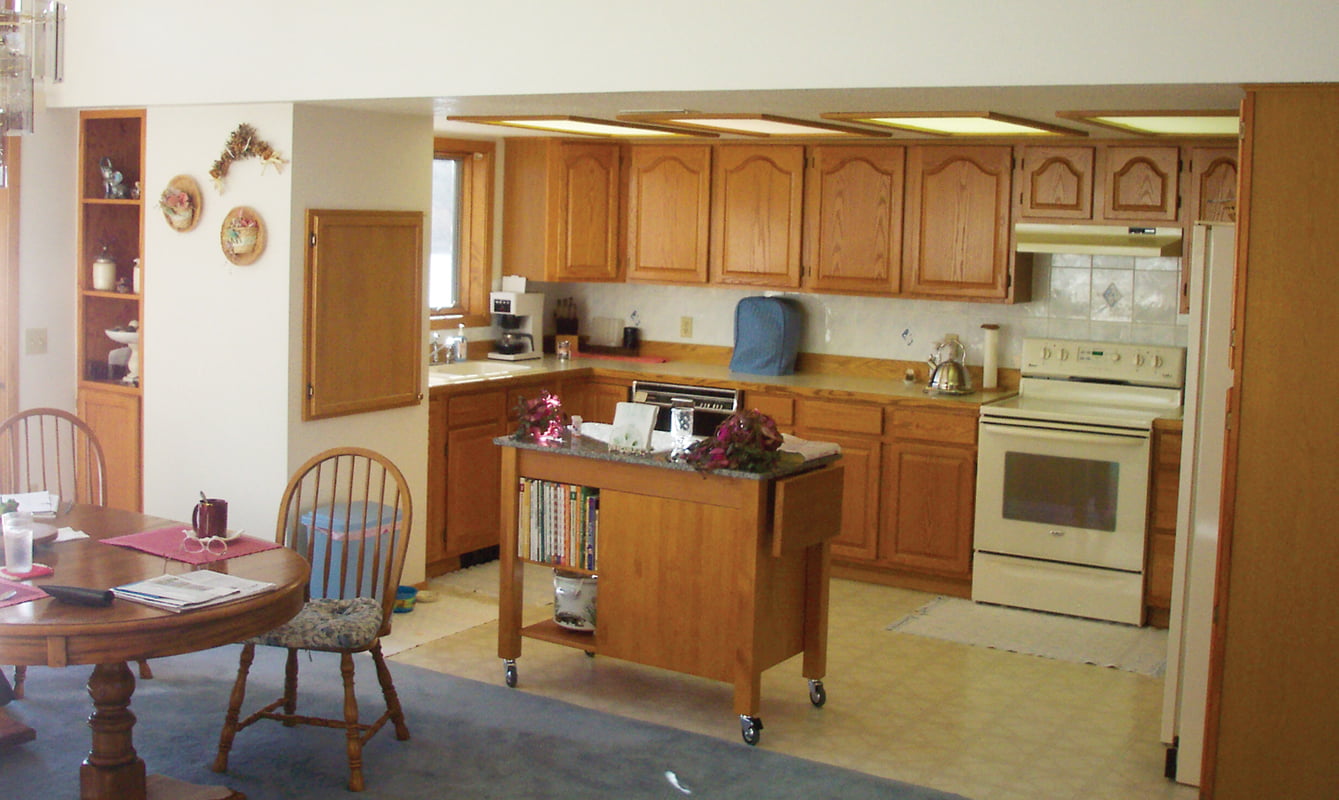 BEFORE: The kitchen, pre-renovation.

The original gabled wall with small windows did not take advantage of the home's majestic surroundings.

The Gildays and their four kids spend many evenings around the fire pit.

Montana Retreat Buying real estate was not on Tom Gilday’s agenda when he took a family ski trip to Montana back in 2004. But on a drive to see a friend’s new vacation property, he spotted a split-level home for sale at the edge of a pristine lake with an idyllic view of the Swan Mountains—and was smitten.

“It was breathtaking. You look across the lake and the mountains are right there,” recalls Gilday, vice president of Silver Spring-based Gilday Renovations. “The house is on a peninsula. If you stand in the living room and look right and look left, there’s nothing but water.”

Gilday and his wife Karen considered the possibilities and commitments of owning a vacation getaway 2,700 miles away from their Maryland residence. The idea of skiing and ice skating in a winter wonderland and spending summers hiking in nearby Glacier National Park won them over. They bought the property and have gone West—with four kids and their dog in tow—once or twice a year ever since.

Though lackluster in style, the 1990s-era, five-bedroom house had good bones, was well insulated and made a perfect base for the family’s outdoor pursuits. But over the years, Tom Gilday studied architecture prevalent in the area and gathered ideas for a future renovation. “The original house didn’t take advantage of the views,” he says. “I kind of knew what was possible but it took me a while to figure out how to do the transitions.”

A few years ago, the Gildays decided the time was right to update the house in order to improve the views and also to create an aesthetic that would better reflect its surroundings. While Gilday’s design would add about 108 square feet to the existing structure, it would ultimately create a more spacious feel by reconfiguring rooms and introducing more windows.

First, he eliminated the raised front entry door and split-level staircase and landing. A new front door on the ground level now opens to a streamlined staircase, making room for a large closet in the entry foyer and built-in bookcases in the living room above.

On both gabled ends of the second floor, walls with modest windows were traded for great expanses of glass. In the living room, Gilday added a large fireplace—curiously missing in the original home, given its location—and bumped out new glass windows to offer unencumbered mountain views. A new covered porch on the west-facing dining room side helps eliminate solar gain and offers a perfect outdoor perch.

Gilday also shifted the master bedroom to the mountain side of the house for better views, expanding it by four feet. A new master bath built into the bedroom left space for a home office in the bedroom’s former location. He completely gutted the kitchen, replacing it with new cabinetry, Silestone countertops and updated appliances.

Gone are the builder-grade drywall and painted masonite exteriors, replaced by a rugged material palette that lends the home authentic Western style inside and out. Working with J. L. Halverstadt of Wild Wood Eccentrics in Whitefish, Montana, Gilday selected a wide range of reclaimed materials to be used throughout the property for style and sustainability. “All the lumber, siding, stone, everything used in the house was reclaimed—the beams, the siding on the inside and the outside and the horizontal logs. This is about as green as you can get,” he says.

Montana-based Brian Quay oversaw construction on-site for Gilday, who managed the project remotely. One of the most challenging details was executing Gilday’s window design: The glass was installed into notches in massive reclaimed-wood beams. “It looks like the glass comes out of the beams themselves,” explains Gilday.

Karen Gilday furnished the interiors in comfortable, rustic style and selected all of the kitchen and bath cabinetry and materials to complement the home’s new look. Artwork the couple has acquired in the region also reflects a Western theme.

The family now enjoys vacations in the newly completed home more than ever. In the summer, they gather with neighbors around the fire pit and enjoy meals on the new porch. “The family is always together out there,” says Gilday. “We play chess, read—and there’s not as much emphasis on TV.

“The first time I went out there when it was all done,” he recalls, “I remember sitting on the porch and looking through the house towards the mountains at dusk. They turned purple, then they turned golden when the sun set. It’s a magical place.”

Photographer Heidi Long is based in Kalispell, Montana.

For the 12th year in a row, Canada Goose has partnered with the streetwear brand Concepts on a “heritage piece.” The latest collaboration recasts...