Randalls Mars added a second story during his renovation of the 1965 home.

The entrance courtyard was remodeled with concrete pavers and river stones. 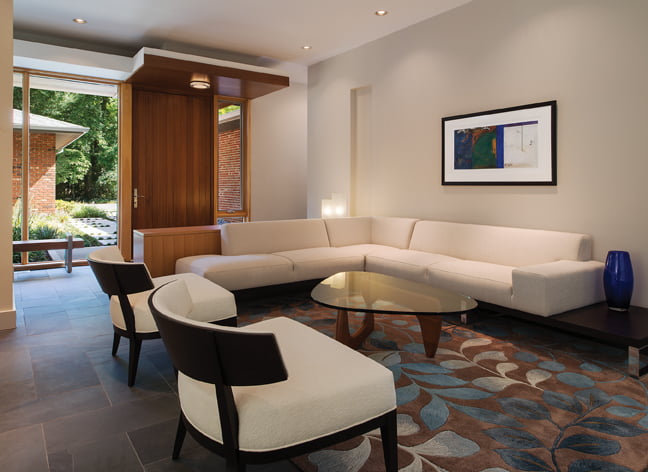 The living room (opposite) is furnished with chairs and a sofa from Theodores and a Noguchi coffee table. 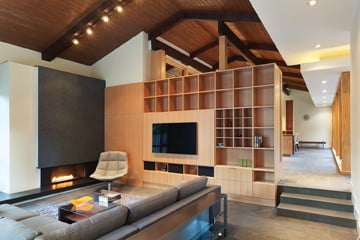 The original wood-paneled ceiling extends to the family room with its granite-faced fireplace.

Mars collaborated with Lobkovich Kitchens on the kitchen, which incorporates a dining area. 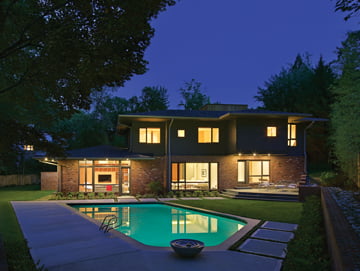 A pool behind the house beckons guests.

Modern Re-Do As the co-founder of Naviance, a software provider of college and career-planning tools, Stephen Smith is in the business of readiness. So when he decided to move from the District to be closer to his Virginia office, he prepared a list of must-haves for his new house. “I wanted a master suite, a garage and a room where I could put my piano,” Smith says. “The house had to be big enough for family and friends.”

His search led to a sprawling, 1965 home in Arlington that had been expanded in the 1980s. “The house looked different from anything I’d seen,” recalls Smith. “It was quirky.” Multiple, one-story wings were arranged around an entrance courtyard at the front and an indoor pool at the rear. Two of the bedrooms in the addition had no windows and the master bedroom opened to an interior courtyard.

Still, Smith saw potential in the tall, timber-ceilinged rooms and bought the property in 2012. A major renovation followed under the direction of McLean architect Randall Mars, who opened the interiors to the outdoors and added a second level with a large master suite. “I liked that Randy’s designs are modern, but also warm and inviting,” says Smith. “I didn’t want a house that felt like a museum.”

Confined to the home’s existing footprint by local zoning regulations, Mars simplified the layout of the rooms and brightened the interiors by adding numerous windows and opening up the floor plan. “We wanted to eliminate the dark, windowless areas and create bedrooms that take advantage of the landscape,” the architect says.

As it happened, Mother Nature helped with Mars’s reorganization of the house when a severe thunderstorm caused a tree to fall into the indoor pool. Rather than rebuild its enclosure, Mars left the pool exposed as the centerpiece of the backyard.

The biggest alteration was the addition of a prominent stair tower to reach the new second level. Clad in mahogany, the tall structure acts as a punctuation mark within the low-slung brick home. Mars further accentuated the horizontality of the original house by extending broad eaves from its hipped roofs.

At the front of the house, the entrance courtyard was remodeled to emulate the serenity of a Japanese teahouse. Staggered concrete pavers lead past low plantings and river stones to the new mahogany front door and a view of the mahogany slats enclosing the second-floor balcony.

Just inside the front door, a formal living room centers the house. The 1980s addition, which flanks one side of the entry, has been reconfigured and its roof and window replaced. The wing now encompasses a music room—home to Smith’s 1920s baby grand piano—and two guest suites. The wing opposite the music room opens to the courtyard through floor-to-ceiling glass walls. It has been remodeled to create a new kitchen, dining area, and family room—one of Smith’s favorite spaces, where he can relax on a sectional sofa next to the granite-framed gas fireplace or lounge on the cushioned window seat.

These living spaces are divided by freestanding storage walls fitted with anigre-finished cabinets, drawers, and shelving. Crafted by Silver Spring-based Allegheny Woodworks, the built-ins stop short of the ceiling where the original wood paneling and beams are preserved. “The new millwork warmed up the house and added even more detail to transform the architecture,” says Mars.

Upstairs, the new master bedroom opens to a private terrace and a sleek bathroom with a freestanding soaking tub. Two more bedrooms, a bathroom, and a laundry room occupy this level with access to the deck overlooking the front courtyard.

Smith worked with interior designer Sarita Simpson, formerly of the now-closed store Vastu, to furnish the rooms with contemporary pieces. “Steve is meticulous; we started working on the furniture plan before the house renovation even began,” recalls Simpson, who now runs her own firm in Arlington. “His design aesthetic is modern, but he isn’t interested in Minimalism that is stark and cold. So we played up the earthy, Mid-Century design of the house.”

Smith says he loves the way Mars used windows to connect indoor and outdoor spaces. “In almost any room, you have a view, making the landscape design an integral part of the interior,” he says. One evening while the homeowner was sitting in the family room, “I noticed something moving in the courtyard,” he recalls. “When I got up, I saw that a fox had curled up under the Japanese maple tree. Apparently, he found the courtyard as relaxing as I do.”

Writer Deborah K. Dietsch is based in Washington, DC. Anice Hoachlander is a principal at Hoachlander Davis Photography in DC.