BEFORE: The front façade prior to the renovation.

The former front door opens into the original wing, now remodeled and unified with the addition by ceiling coffers.

A custom island separates the new kitchen and family room.

The new front door opens into a spacious foyer.

The new front façade shows the entry as a hyphen between the existing structure and the addition.

A long gallery connects the new entry to the original living room.

A long gallery connects the new entry to the original living room.

BEFORE: An addition was demolished to make way for a bigger one that honors the home’s architecture.

BEFORE: A rickety back porch was replaced with the sprawling rear addition.

A generous corner lot allowed for an addition nearly three times the size of the original home.

A breezeway connects the remodeled garage with a mudroom. 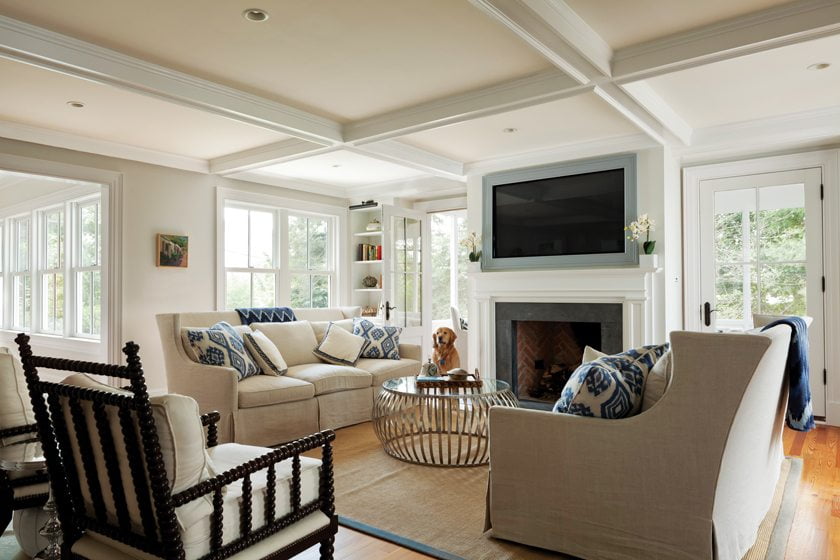 The family-room fireplace shares a chimney with a fireplace in the adjacent screened porch.

The spacious master bedroom is a restful retreat in blue and beige.

A window seat and built-ins connect the remodeled original bedrooms with the new master suite.

Smart Makeover Seamless Style While contemplating the renovation of the house where his client grew up, David Neumann’s first instinct was to tread lightly—especially with demolition. But he needn’t have worried: The couple, who purchased their Vienna, Virginia, home from the husband’s parents, was fully on board for a complete makeover.

The 1913 abode had suffered from a slapped-on, one-story addition in the 1980s. “I asked if they were willing to remove it,” Neumann says. “The answer was an unequivocal ‘yes.’ There was no discussion.”

But that was just the first step in a process that would reorient the home ’s corner-lot façade and nearly triple its original size with a new wing built beside the original structure. Style-wise, Neumann wanted to complement the “eclectic farmhouse,” with its Queen Anne Victorian overtones. He also wanted it to blend with its surroundings: The house sits at the edge of Vienna’s historic district facing two other homes that were built in the same era.

The couple tapped Atlanta designer Heather Hogan Roberts—a childhood friend of the wife—for the interiors. Both women hail from Massachusetts, and the original house reminded them of classic New England clapboard homes. Roberts factored this in as she explored finishes and architectural details. “A lot of the selections really mimic a Nantucket house,” she says.

The young couple—who had a baby and toddler in tow—requested that the new addition encompass an open-plan kitchen/breakfast/family room and a screened porch on the main floor. The original cellar was enlarged to create an expansive rec room and gym opening onto a patio and terrace, while a second level holds a master suite, nursery, and laundry room. “They didn’t want anything to get in the way of having a house that really functions for them,” Neumann notes.

The goal was a seamless design in which the new section would be indistinguishable from the old. That meant moving the main entrance around to the side so it would open into the “hyphen” connecting the old and new structures. “Entering in the middle gave us the opportunity to create furnishable spaces to each side,” Neumann explains. Had the front door remained at one end, he points out, long hallways would have been necessary to connect the spaces, consuming valuable square footage and shrinking the living spaces.

The next major issue was the ceilings. Though most new homes have ceilings up to 10 feet tall, the addition had to match the old structure’s ceilings, which are less than nine feet high. “The second floor had to be uniform, and that dictated the ceiling height for the first floor,” explains the architect, who also had to support the expansive addition with deeper joists than in the older section—making the new ceilings even lower.

“That was one of the big challenges: How do we give the illusion of more height?” Neumann recalls.

Coffers were the answer, with their added bonus of delineating the addition’s wide-open spaces. Neumann visually heightened the kitchen ceiling with extra-tall cabinetry sourced by Eric Lieberknecht Design, using beadboard and flat trim instead of full coffers. For her part, Roberts says, “we went light on everything—it’s ethereal, light and coastal on all five walls, which includes the ceiling.”

The owners, who now have a third child, appreciate how Neumann’s layout has evolved over time.  “He was thinking about space long-term,” the wife comments. A play space adjacent to the family room, for instance, has become an area for the older kids to do science and craft projects, while the youngest son can still pull out his books and toys. Upstairs, the nursery has become the wife’s office.

The couple also loves the easy circulation between the old and new sections. “David was thinking about how you make your way through the house in the course of a day,” the wife explains. “The elements of his plan allow for an easy flow for our family, regardless of the season.”

The admiration is mutual. “The best part was taking something that’s approaching 100 years old and giving it another 100 years. It’s gratifying that they had the resources to do it,” Neumann observes. He points out the home’s location among similar vintage houses. “They extended the fabric of this historic district—and in my view, that was to their great credit.”

How do you decide whether an old house is salvageable?
David Neumann: Beyond utility and cost-efficiency, does the house contribute positively to the character of the neighborhood? Is there sentimental or historical value? We are biased to reuse whenever possible.

What inspires you the most about century-old houses?
DN: Extending the life of an old house through thoughtful alteration and addition is gratifying as a commitment to sustainability.

When a remodel amounts to a gut job, how do you establish a design direction?
DN:  When most or all of the exterior is being kept, we look to its character as the starting point. We endeavor to create interiors that draw design inspiration from the exterior while embracing the requirements of our client’s modern life.

How do you determine the layout and flow in a design that’s based on an existing structure?
DN:  I take care to avoid turning existing rooms into pathways to an addition. A layout should yield attractive, furnishable and conversation-supportive spaces in both the new and reworked portions of the house.