BEFORE: The living room.

BEFORE: The dining room.

Dated windows and doors were replaced with black aluminum-clad ones.

On the street level, the new family room lies beyond the refashioned foyer.

The kitchen’s original windows and doors were replaced with French doors.

A deck was built atop the detached garage with new stairs to the terrace below. 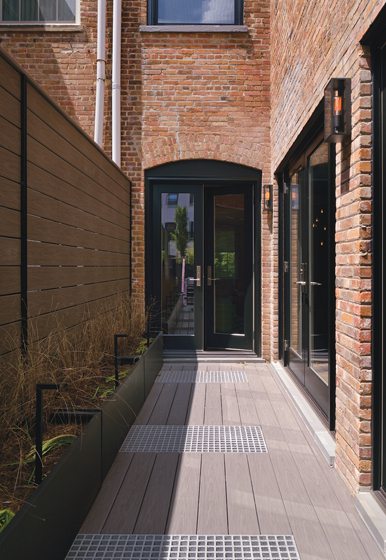 BEFORE: The outdoor walkway.

The master bedroom is wrapped in Phillip Jeffries wallpaper.

Behind its historic façade, a design team reinvents a DC row house for its minimalist owners

Modern Redux RunningTo a casual observer, the Federal-style Kalorama row house would have seemed move-in ready: Its stately brick façade opened into well-proportioned rooms with crisply painted walls. However, as architect Eric Carle points out, the owners “didn’t buy it for that. They wanted to make it theirs.”

The couple, executives whose jobs have taken them from Chicago to New York and Washington, share an urbane aesthetic with a fondness for European modernism. Constance Mueller, their Chicago designer who completed their previous homes, immediately noticed a disconnect between this one’s traditional public spaces and its contemporary upstairs rooms. “It didn’t flow at all,” she says. To achieve a more cohesive interior for the owners’ collection of modern art and furnishings, they assembled a team that included Carle, the founder of runningdog Architects; Vincent Sagart of Poliform | sagartstudio; and Al Royer of Gibson Homes.

The most dramatic transformation was in the rear, where the team redesigned the kitchen with three sets of French doors opening to newly expanded decks off the kitchen and the guest room above it, and over the detached garage. “They wanted to have the more outdoor presence,” Carle says, “and the kitchen didn’t take advantage of the southern light it had. This allowed for a lot more penetration of light into the rest of the house.”

The airy update only left Sagart one full wall for the kitchen’s functional area. He selected dark, gray-oak cabinetry that frames a sleek Miele range and coffee center. A pale Caesarstone island features a gray-oak top that floats on a thin sheet of steel, which maintains a sense of openness.

“That is very much a character-defining element,” Sagart says of the island’s design. “This is a deceivingly spacious-looking kitchen, despite the fact that it’s only 12 feet wide and needed to accommodate an island-wide enough for wine storage and the bar top.”

As the renovation proceeded through the rest of the house, Carle found evidence of a past electrical fire behind the walls and also discovered that the stairs weren’t structurally sound. With this knowledge, the owners decided to gut all four levels of the home. During the process, electrical and plumbing systems were replaced and new ductwork rerouted to eliminate soffits and bulkheads protruding from walls and ceilings.

Carle is most proud of the new stair he designed at the home’s core, lit from above with a large skylight. “It’s the main architectural element that pulls the entire project together,” he says of the warm oak treads and rails that rest on coated-steel bars. Openings in the walls surrounding the stairway visually lighten its monumental presence. “It’s a way of creating ‘view corridors’ that allow each space to stand on its own, but have connections with other spaces,” he adds. The architect employed a similar technique in the master bathroom, where glass transoms near the ceiling allow light to flow into the adjacent den. “You’re limited, with no windows on the east and west sides, so you try to open these row houses up to get as much light as possible,” he explains.

Throughout the home, Mueller selected finishes—such as pale white-oak flooring with a warm gray wash—that would complement the owners’ existing collection of modern European furniture. She replaced a traditional fireplace mantel with an entire wall of Ann Sacks Silver Cream marble slabs, flanked by custom, Mondrian-like columns of built-in shelving. And instead of formal crown molding, she opted for contemporary trim on the dining- and living-room ceilings. She and Sagart also designed sleek wardrobes in the master bedroom and master-bath cabinetry—all by the Italian firm Poliform.

The openness and light of the new floor plans, says Carle, dovetails perfectly with the owners’ style. “We wanted to have as many sight lines through the house as possible,” he notes, “so nothing feels small or closed in.”

How do you bridge a historic façade with modern interiors?
Eric Carle: Small exterior elements can set the stage. Sometimes it’s as simple as contemporary light fixtures or front-door hardware. These details suggest a change is coming.

How can you carve outdoor space from cramped city dwellings?
EC: If you can build a roof deck, go for it. If you can add or increase the size of your decks, then do so. But keep the furnishings and landscaping simple and clean.

How does your commercial background inform your residential work?
EC: I urge my clients to make finish selections before construction begins to avoid delays. In the commercial world, we would have every aspect of the job specified—finishes, hardware, fixtures, etc. That way, the project timeline is far more predictable.

How do you make small spaces live largely?
EC: Creating sight lines between spaces will expand their presence. When rooms are vertically challenged, a taller baseboard pulls your eye up. But avoid large crown moldings so space doesn’t feel too heavy.

As the turbulent events of 2020 unfolded, ideals of activism and social justice moved to the forefront of our public discourse. In early 2021,...