The 950-square-foot addition includes a new kitchen and a second-floor screened porch .

Skylights brighten the kitchen, which is three feet taller than the older rooms of the house. 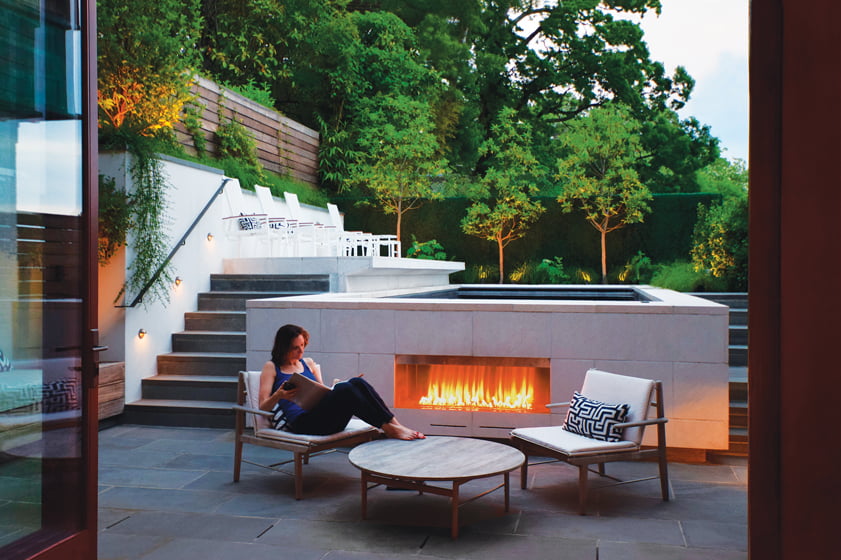 The upstairs porch features mahogany trim and a skylight fitted with a fan. 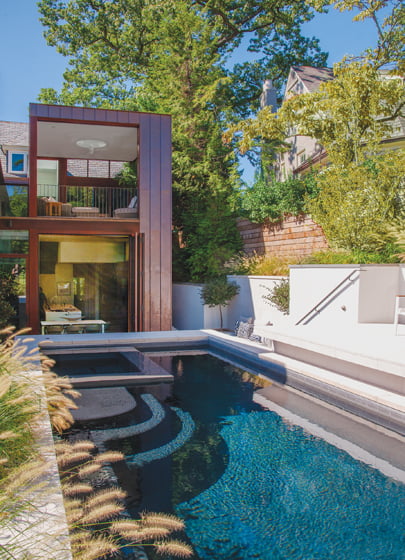 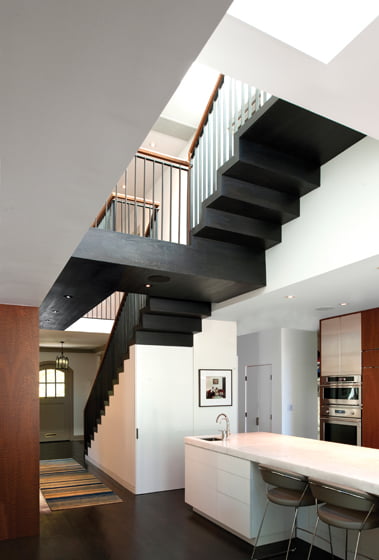 The sculptural underside of the new staircase is covered in stained-oak planks. 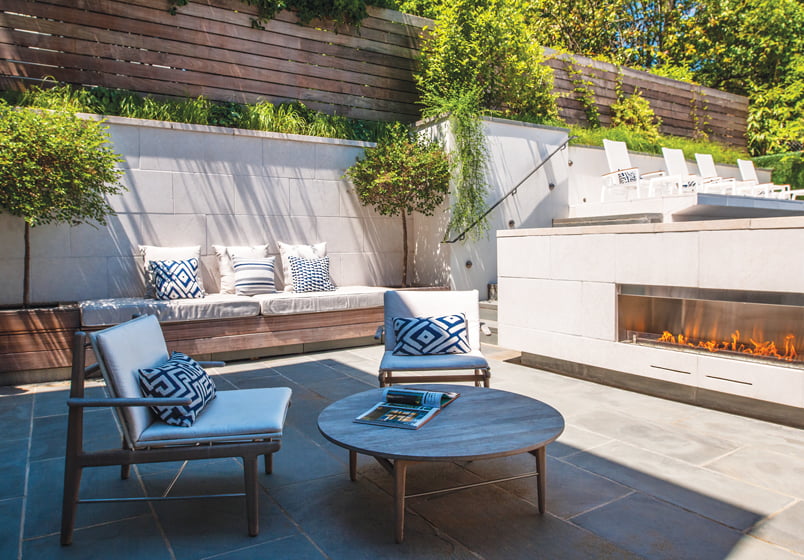 A custom built-in bench extends along one wall, flanked by tree-form Palibin lilac.

The four basic elements of nature—water, earth, fire and air—neatly come together in the rear terrace of a remodeled 1920s colonial in Northwest Washington. Spending time in nature can have significant health benefits. Visible from the home’s new kitchen addition is the shimmering, liquid surface of an elevated, marble-clad swimming pool and spa bordered on one side by a raised terrace and fringed with shrubbery and plants.

Set into one wall of the raised pool, a gas fireplace warms an outdoor sitting area, offering a view of dancing flames from the kitchen. This backyard oasis provides numerous places to unwind and breathe in the relaxing atmosphere.

“I use the terrace and pool almost every day,” says homeowner Tim Davis, president and CEO of the Close Up Foundation, a nonprofit dedicated to civic education for schoolchildren. “And I love the way the outdoor features and fireplace look from inside the house, even during the winter.”

Davis, a widower, purchased the traditional abode in 2003 after living in Chevy Chase, Maryland. “I liked that this house had good bones, was in the city and had already been renovated,” he recalls.

About a decade later, when he decided to add a bigger kitchen and more usable outdoor space, his tastes had changed and he wanted something more contemporary.  To move in that direction, he chose McInturff Architects, a Bethesda firm known for award-winning modern design. “I was looking for an architect who designs clean lines and maximizes the light,” the homeowner recounts.

Mark McInturff and project architect Colleen Gove Healey concentrated the renovation at the back of the L-shaped house. A terrace and a new kitchen were added and the indoors opened out through a wall of retractable glass panels. The duo collaborated with landscape architect Lila Fendrick on the exterior plan.

The outside wall of the original study was demolished to join this space to the kitchen; it serves as a family room/library, with built-in shelving and a TV that can be automatically raised from a custom cabinet. “I wanted a big, open space where I could cook and entertain with people all around me,” says Davis.

McInturff says the challenge of the design was “transitioning from the traditional rooms at the front to the contemporary space at the back.” He points to the center hallway, where a new wall bumps out to accommodate the ends of the crown molding and baseboards extending from the older part of the house.

Both the formal dining and living rooms at the front of the house were left intact and updated with the removal of some molding and the addition of new finishes and furnishings. Located next to the dining room, the former kitchen now encompasses a bathroom, bar and pantry.

A hall leads into the new kitchen from the older part of the house; the floors throughout the residence are unified by ebony-stained oak planks, which were also applied to the hallway ceiling. “They create a ribbon that drops in and connects old and new,” McInturff explains.

The architects reconfigured the original staircase—leading from the foyer to the second-floor bedrooms—to accommodate a new flight of stairs in the addition that connects the second level to a screened porch overlooking the pool. Visible in the kitchen ceiling, the sculptural underside of the new staircase is also covered in stained-oak planks to match the floors.

“In choosing materials, we tried to reference the older parts of the house,” says Healey. Kitchen cabinets, custom furnishings, window frames and staircase handrails are crafted of mahogany to add rich color and texture. On the outside, new copper siding complements patinated metal paneling that was applied to the outside of the second-floor master bedroom during a 1990s renovation to unify both sides of the house.

Interior designer Susie Zohlman worked with the architects and Davis to ensure that the furnishings, rugs and color schemes “blended the old with the new,” she says. “Contemporary design can be cold, so we warmed it up with textures and colors.”

Davis recently added a pull-down projection screen to the terrace, where he often hosts parties and events, including political and charitable fundraisers. “Friends watch movies outside, swim when the weather allows, come and cook in the kitchen and just hang,” he says. “I love having a house that is a gathering place.”

Innovative Landscape Solutions What was the scope of the project? Kane Landscapes masterminded a landscape in Leesburg that involved grading the site and removing...