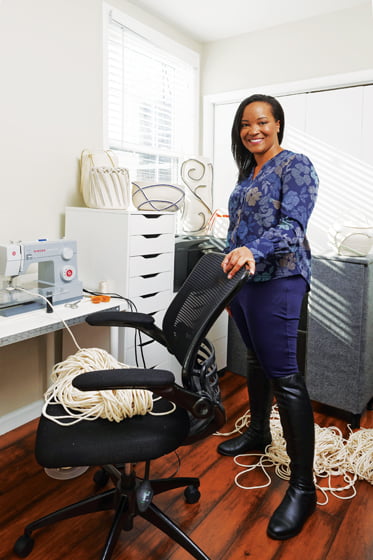 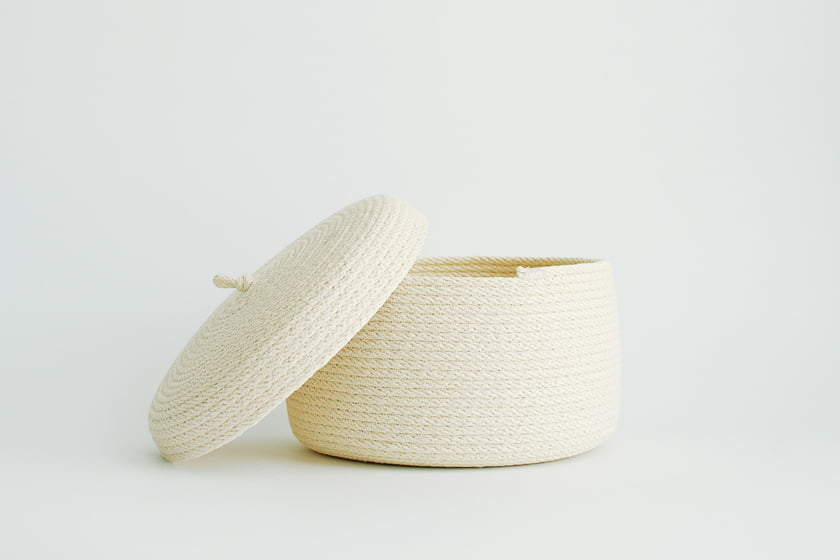 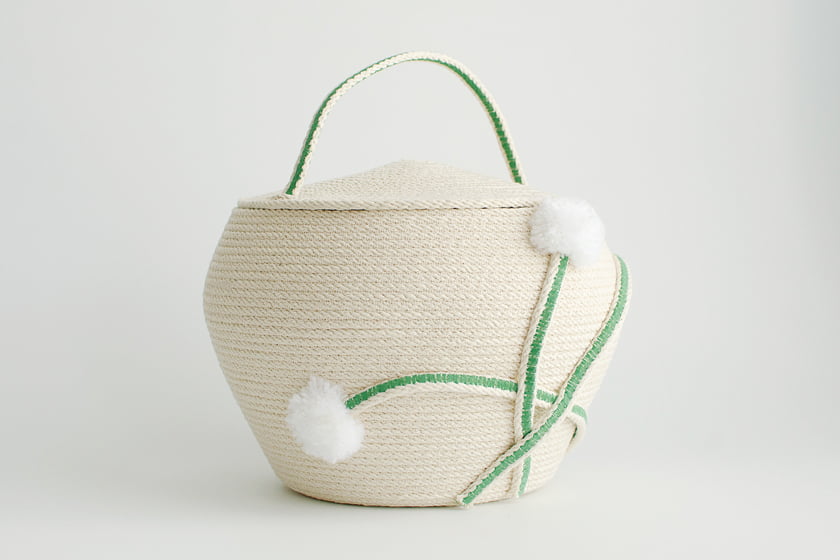 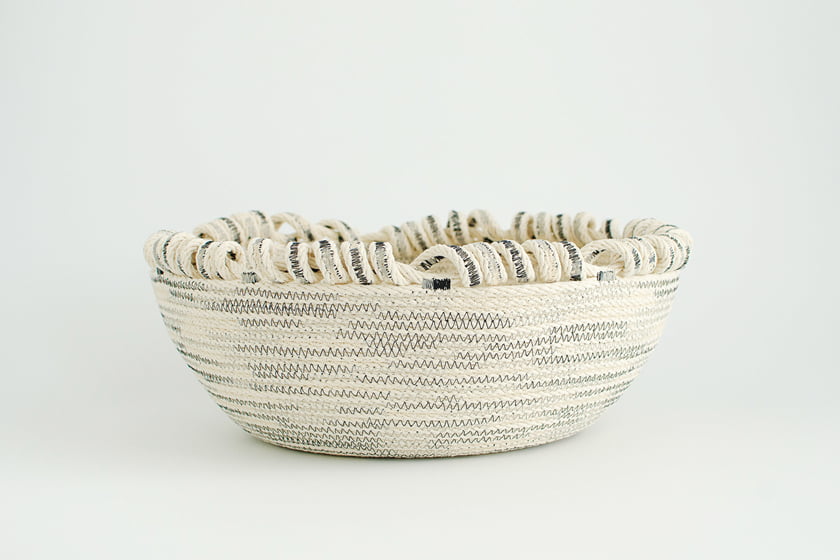 Dotstry constructs a piece on one of her two trusty sewing machines in her Capitol Hill studio.

On a quiet, wintry day, basket maker Tenisha Dotstry sits in the living room of her Capitol Hill apartment, yards of rope piled beside her. She’s been taking apart baskets remaining from the past season and anticipating how to reuse the rope in new designs for spring. “I have so many thoughts about where I want to go with it,” says the artist, her eyes brightening.

Dotstry started making baskets just four years ago. But reaching that point, then learning to construct the minimalist baskets she imagined, represents the journey of a lifetime. Dotstry recalls her first encounter with basket-making a decade ago, when she and her husband, a lieutenant commander in the Navy, were stationed in Charleston, South Carolina. “I used to go the markets and watch the ladies making sweetgrass baskets,” she recalls, referencing that regional African American craft handed down through generations. “I wondered if one day I could figure it out.”

Later, after joining a quilting group in Kingsland, Georgia, she watched as quilters made baskets from thick rope wrapped in patterned fabric. “What would happen if you just sewed rope without the fabric?” she asked them.

“It wouldn’t look right,” they responded. “Nobody would like that.”

That was late December 2014—and Dotstry remembers thinking, “I’m just going to try it so I’ll have a hobby for the new year.” Finding some thick rope at home, she sat down at her sewing machine and was just getting started when she heard a deafening crack: The bulky rope had broken the machine. Undeterred, Dotstry replaced the Kenmore machine with a heavy-duty Singer, found some thinner clothesline at Walmart, and proceeded to make her first basket—which, she says, looked a lot like the ones in the Charleston market.

“That was before I saw how versatile the rope is, how you can sculpt it, and how it works with the machine,” she observes. Over the next two years, through trial and error, she developed a series of functional baskets along with sculptural pieces that tap the potential of rope as a casual, elegant art form.

Starting out with books from the 1980s, Dotstry taught herself to guide braided cord into the sewing machine with her right hand, while holding her left at the correct angle to allow the coils to build into the desired shape—whether a tall vessel, a plump container, a classic vase or an undulating bowl. She settled on unbleached, all-cotton rope of a uniform three-sixteenth-inch thickness, noting, “Even though I’m technically using the same material every time, literally every foot of rope acts differently. Depending on the humidity, it may be softer or harder; it may need more or less tension. I’ve learned to work with the quirks of cotton rope.”

The artist discretely ornaments her one-of-a-kind baskets with plain or scrolled handles—slipped through openings or hand-sewn in place—adding pops of color in zigzag stitches or in waving lines of Swarovski crystals. “I like bling,” she confesses. At the same time, her restraint in composing these simple forms distills traditional basketry to its abstract essence—as in Ten Dots Textiles, the company name that pares down her own.

Just two years after starting to sell her baskets, Dotstry will present her art this year at the American Craft Show in Baltimore and the highly selective Smithsonian Craft Show—where this first-time participant will exhibit in the same majestic hall as Mary Jackson, the renowned master of contemporary sweetgrass basketry and winner of a MacArthur Foundation award.

Dotstry hears her legendary name often. “Every city I go to, every show I’m in, someone asks me, ‘Have you heard of Mary Jackson?’” When Dotstry was accepted into the Smithsonian show, she recalls thinking, “Oh my God, I’ll be in the same place as Mary Jackson!”

Just as Jackson’s weaving tradition was passed down, Dotstry has early memories of sitting at the sewing machine with her mother, who taught her to sew at a young age. And while Jackson has raised the art of basketry to new levels using grasses indigenous to her South Carolina Lowcountry home, Dotstry took up a material common in her world—sailing rope in various forms. “I’ve always lived by the water,” she explains.

Born and raised in Newburg, located between two rivers on Maryland’s southern tip, she joined the Navy after high school, training for two years to become a nuclear electronics technician. “When I’m thinking through new designs,” she says, “my thoughts usually go to water and flowing shapes. It always comes back to the Navy and nautical themes.”

While translating those inspirations into her baskets, Dotstry continues to experiment with new techniques—recently dying rope in brilliant colors. The possibilities have been percolating since those early days at the Charleston market. “Because I’m teaching myself, everything I make is a learning process,” she reflects. “I absolutely love it.”

Tenisha Dotstry’s baskets will be on view at the American Craft Show in the Baltimore Convention Center from February 22 to 24, and the Smithsonian Craft Show in Washington’s National Building Museum from April 24 to 28. tendotstextiles.com.

“My clients purchased their home in Northwest DC, then hired me to overhaul the traditional rooms in fresh, kid-friendly and transitional style,” says Erin...