The Bygone boasts stunning views of Baltimore Harbor from the 29th floor of the Four Seasons Hotel. © Atlas Restaurant Group 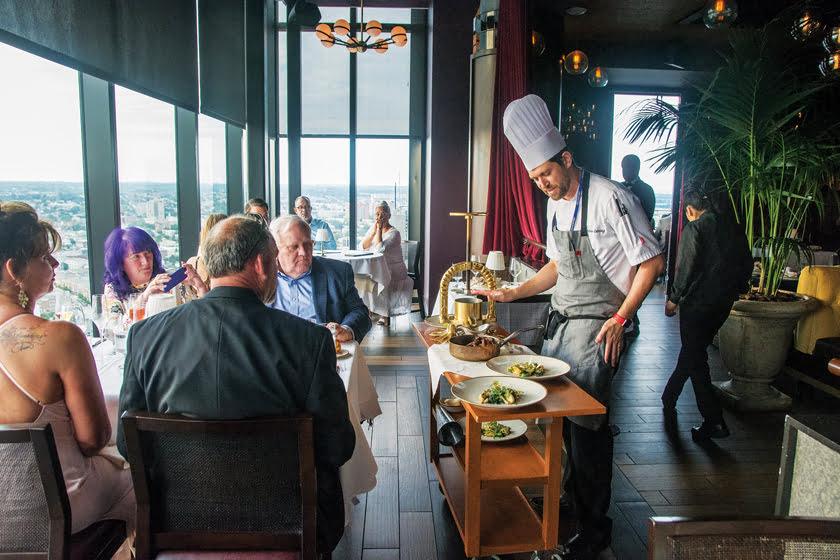 Duck Duck Goose, where the menu takes on a Continental edge. © Kim Rodas

Baltimoreans rev up their palates at these new culinary destinations—and you should, too

We love our crabs, as any Baltimore resident will tell you, but there’s so much more to dining in this historic city cradled by the Patapsco River. In the past year, restaurants have opened around town that pay homage to an early merchant, 1920s glamour, an artsy space and a love for French cuisine.

Diners will be charmed by the beautiful décor of a turn-of-the-century building that survived the Great Baltimore Fire of 1904 and appreciate the grandeur of another era while ensconced atop Harbor East’s Four Seasons Hotel, which boasts stellar views to match the menu.

Earnest Gallic cooking will appeal to taste buds in two locations—scenic Fells Point and the nearby business district. And in Baltimore’s newest arts district, a veteran restaurateur presents Italian-inspired fare in an intimate space.

All you need to do is bring your appetite.

THE BYGONE
Take a dedicated elevator with a welcoming, uniformed operator from the lobby of the Four Seasons Hotel in Harbor East to the 29th floor for a sumptuous and visual thrill. Think 1920s glamour with probably the best sky-high views of Baltimore Harbor and downtown from expansive windows and three separate outdoor decks. A dress code makes sense, though it’s not stuffy (collared shirts for guys, no baseball caps for gals, among other guidelines). Get a drink at the spacious bar or settle in for dinner on tufted banquettes and luxurious leather chairs. Tables with crisp linens or exposed black-marble tops are set with gold chargers and napkin rings. Burgundy velvet drapery throughout the restaurant adds elegance and privacy. The luxe menu offers treats like lobster tail Imperial, Chilean sea bass and rack of lamb diablo prepared by executive chef
Matthew Oetting. 400 International Drive; 443-343-8200. thebygonerestaurant.com

THE ALEXANDER BROWN RESTAURANT
One of the city’s newest restaurants opened in February in a gorgeous Baltimore landmark that formerly housed investment giant Alex. Brown & Sons. Alexander Brown was an Irish merchant-turned-financier whose descendants still own the building that survived Baltimore’s disastrous fire. The family partnered with Tampa, Florida-based Caspers Co. to develop the space. Allison Casper Adams, a company principal, says the building’s history appealed to her and her brother, Blake Casper. “The building is the reason we are there,” she notes. “It’s unique and special.” Diners are greeted by the landmark’s original marble walls and columns and a stunning stained-glass domed skylight before they enter the stately dining room appointed with brown leather chairs, forest-green banquettes and Old World artwork. Chef Andrew Fontaine offers a sophisticated New American menu with appetizers such as foie gras torchon and venison carpaccio and entrées such as wagyu beef for two and rockfish with coconut-jasmine rice. 135 E. Baltimore Street; 443-438-4540. alexanderbrownrestaurant.com

DUCK DUCK GOOSE
Chef-owner Ashish Alfred unveiled this chic brasserie—named after his Bethesda restaurant—in the waterfront neighborhood of Fells Point last year. “Baltimore is a really great city with hard-working people,” says Alfred, who lives in nearby Canton. “I’m in love with what is happening here, food-wise.” There are French leanings from his kitchen, but the cuisine has a Continental edge with “shares” like lamb Bolognese and bone marrow with beef ragout, and “mains” like honey-roasted duck, branzino and tournedos with foie gras. Guests can settle into the elegant bar with its communal table and comfy sofa, the polished dining room or sidewalk tables in season. The vibe is laid-back and fun. 814 S. Broadway; 443-869-2129. ddgbaltimore.com

CHEZ HUGO
Chef Steve Monnier, who wowed diners at his tiny Aromes in the Hampden neighborhood, can now be found at Chez Hugo, a casual French bistro named after his son. He opened the restaurant last year in the classy 1905 Merchants Club building in the business district. Marble-topped tables, bentwood chairs, a stylish tiled floor and sultry French tunes set the stage for the meal to come. “Plats” include boeuf bourguignon, canard pour deux and steak frites—all created with an eye toward seasonal ingredients.The menu is guided by what’s available, says Monnier, who grew up in France and trained in Michelin-starred restaurants before landing in Baltimore. 206 E. Redwood Street; 443-438-3002. chezhugobistro.com

ORTO
Restaurateur Elan Kotz, a former partner in The Food Market, opened his Italian-inspired restaurant earlier this year in the Station North arts-and-entertainment district near Penn Station. “I was really missing the restaurant and hospitality business,” Kotz says. “I love Station North and I’m excited to add value to the neighborhood.” The cozy, earth-toned space with mid-century and classic artwork seats 78 guests in its two dining areas and bar. The bare-wood-and-marble tables with glowing votives create a romantic ambiance. The restaurant’s name is Italian for “vegetable garden,” reflecting its mission to source local ingredients. Executive chef Stefano Porcile turns out snacks like marinated olives and vegetable giardiniera, pastas like ricotta cavatelli and butternut squash agnolotti (his personal favorite), and entrées like chicken Milanese and seared scallops. 1709 N. Charles Street; 443-759-7200. ortobaltimore.com

As we look forward to warmer days ahead, please join editor in chief Sharon Jaffe Dan for a webinar focusing on lush and luxurious...