The renovation preserved the existing front living room and its gabled roof, part of a 1980s addition.

A 2017 fire precipitated a comprehensive makeover that added a third level onto the property.

The owners relax by the pool and pool house, which were overhauled during the renovation.

A cramped, outdated kitchen was replaced with a bright, open hub for cooking and entertaining.

A NanaWall opens from the kitchen to the terrace.

The owners’ affection for Mediterranean style inspired the stucco façade.

The staircase is bathed in light by three stories of windows. 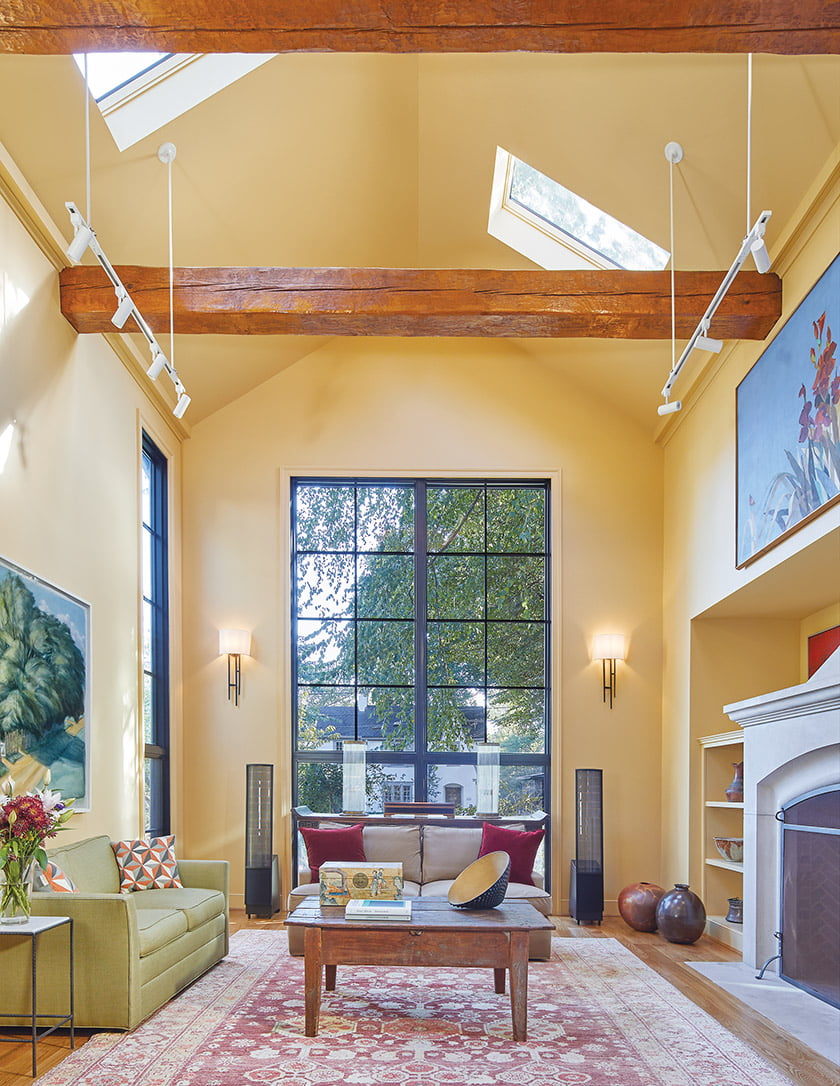 The two-story living room preserves a fireplace and a wooden beam that survived the fire.

Following a devastating fire, architects reinvent a 1927 Wesley Heights home while respecting its quirky past

In 1999, Ken Crerar and his husband Peter Garrett lucked into finding their forever home in DC’s Wesley Heights area. The renovated and expanded 1927 dwelling “was warm and inviting,” Crerar reflects. Years went by and the couple welcomed two sons into the home, but they never got around to giving it their own update—until the whole place went up in flames.

They received the call while on vacation in January 2017. “The fire was pretty intense,” recalls Crerar, CEO of a trade association. Though they were able to salvage and restore most of their furniture and art and ceramics collections, the damage was severe.

Architect Carib Daniel Martin and project designer Gabriela Leniz were invited to tour the site and survey the aftermath. After discussing possible approaches, the owners hired the husband-and-wife team to orchestrate the next iteration of their beloved home. “Ken and Peter wanted to do some things that would take the house in a new direction,” explains Martin. “But they also wanted to maintain the spirit of the original—not fully abandon it.”

Inspired by homes they’d visited on trips to Portugal and Italy, Crerar and Garrett gravitated to Mediterranean style. They wanted to recreate their home’s stucco exterior and salvage its massive limestone fireplace, built during the 1980s by stonemasons renovating the National Cathedral. “And we loved the grandness of the two-story living room,” says Crerar.

A careful study determined that two-thirds of the structure would have to be taken down to its foundation. And, Martin reports, “The entire house had to be stripped to the studs from smoke, fire and water damage.”

Given the project’s magnitude, the owners decided to take the opportunity to reimagine a brighter, more open plan centered on efficiency, functionality and style. While zoning regulations limited reconstruction to the existing footprint, they opted to expand by adding on a third floor.

The first-floor redo left the 1980s front living room gable, porch and fireplace intact. In their biggest move, the architects shifted the home’s staircase from the center to the side of the main volume, opening up once-choppy, compartmentalized rooms. An airy den now occupies the center volume leading to a free-flowing kitchen and dining area in the rear. A three-story window wall on the side and abundant glass on the back of the home bathe the interiors in light.

The large kitchen/dining area is equipped with a wood-burning pizza oven, an island with a custom zinc countertop and the owners’ existing, commercial Wolf range, which was sent to New York for restoration following the fire. “The kitchen now has amazing work and entertaining space,” Crerar enthuses. “Especially in this time of covid, we’ve been able to open up the back and entertain while social-distancing.”

The space segues to a dining terrace and the existing pool through a collapsible NanaWall. “We dropped the kitchen section, which was built on crawl space in a previous addition, down to grade,” explains Leniz. “This allowed us to tie the kitchen into the terrace.” She and Martin aligned the kitchen’s large-format limestone-tile flooring with exterior flagstone slabs for a seamless indoor-outdoor look.

The second floor, which once harbored three bedrooms, now contains an ensuite room for the couple’s 15-year-old son, a laundry room and an owners’ suite complete with sitting room, luxurious bath and balcony. And on the new third level, their 20-year-old son occupies one of two new bedrooms, which share a bath.

Connecting all three floors is the project’s pièce de résistance: a custom, open-riser steel stairway and adjacent screen wall. Martin and Leniz developed the concept and collaborated on its design with Baltimore-based Gutierrez Studios, which fabricated both elements. Made of rift-cut oak and steel, the grid-like screen imparts privacy while filtering light and casting ever-changing shadows into the home. Its system of movable, cantilevered shelves lets the owners display their ceramics collection with ease.

The window wall and floating staircase animate a side elevation of the home that once presented a mishmash of oddly placed windows. Says Leniz, “When you experience the house from the street, it’s almost like it has a second façade.”

Architectural details riff on Mediterranean style—from the home’s authentic ochre stucco to the Turkish mosaic backsplash tile that enlivens the kitchen. Garrett and Crerar even reapplied the same Donald Kaufman paint colors that adorned their pre-fire walls: an earthy yellow in the public spaces and soft sage green upstairs. Now full of their eclectic artwork and furnishings, says Leniz, the newly rebuilt home gives visitors the impression that the owners have lived in it for years.

“There’s a consistency throughout the house that was missing before,” attests Crerar.

For further continuity, the architects clad the existing pool house and backyard masonry walls in the same stucco as the main house. They installed a kitchenette and Murphy bed in the pool house, replaced the surrounding stonework and converted a hot tub into a giant planter.

Now that it’s complete, the owners take pride in using every inch of their efficient, 4,500-square-foot abode. When the pandemic arrived, Crerar and Garrett even created a gym in the basement. “We’ve had the benefit of living here through a very intense period—and we love it,” reflects Crerar. “Carib and Gaby did a really nice job translating who we are into a house.”

How do you glean a client’s aesthetic?
Martin: We ask clients to pull together images of homes they like. They don’t have to find the exact home they want, just things they’re attracted to. When we stand back and look at the photos, themes pop up.

What building material is a game-changer?
Martin: We love TruExterior trim and siding. It’s made with recycled fly-ash, a byproduct from coal power plants. It’s thicker than HardiePlank and, unlike PVC, can be painted any color.

What remodeling mistakes should owners avoid?
Leniz: Don’t build for future buyers because by the time those future buyers appear 10 years from now, they’re going to want other things. Build a house for what you want now and enjoy it.

Something magical happens during the drive past fields of sunflowers and acres of verdant farmland toward Still Waters Farm, the name former owners gave...