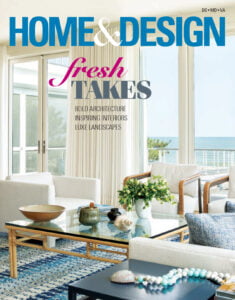 During the renovation of this DC home, the owners had the white-washed brick exterior sandblasted to create a more textured look.

When these homeowners married more than a decade ago, she had four children and he had three. They had to find a house to accommodate a total of seven children spanning in age from grade school to college. Realtors tried to steer them to Potomac, but the children balked. Their schools and their friends were in the District and that"s where they wanted to stay. So they squeezed into a too-small house, the oldest children bunking in with the younger ones. Like a favorite pair of shoes that is too tight, the brick colonial was their happy home for ten years.

Ironically, when all the children were grown and gone, the empty nesters finally took stock of their too-small house and decided they needed a bigger space for visiting children, in-laws and grandchildren. They considered moving to Virginia, but their children balked again. It turned out they had all become attached to their house, even with its flaws and quirks. So the couple decided to renovate, envisioning a grand library that could seat everyone comfortably, a restaurant-grade kitchen (both are avid cooks), a more gracious foyer, a music room and a new master suite.

But first they evaluated the structural integrity of the old house. “There were leaks and we were worried about termites,” said the husband. “Sleeping porches had been enclosed and there was no heat and barely electricity [in those rooms]. Everything had been put in backwards. We started doing this out of necessity, but that got us going. What started as a teardown in back morphed into a much larger renovation.” The construction project was so massive that the couple moved out, spending a year and half in the wife"s family home in Manassas, Virginia.

Now finished, the renovation bears little resemblance to its former self. The old brick house was originally painted white. They had the paint sandblasted off to achieve a more textured antique look, while a true lime wash was applied to the brick addition. Inside, the transformation by interior designer Sarah Boyer Jenkins is even more dramatic. Jenkins recalled her impression of her client"s taste, “I saw what she had that she liked. We just started in and hit it off beautifully. It"s traditional, but not stuffy traditional. It"s current; it"s fresh.”

Beginning in the expanded foyer, Jenkins found a pair of antique Empire gilt cut-crystal basket chandeliers. One hangs perfectly framed in the arched shape of the home"s front door. A small book table and a French commode, flanked by two Louis XVI side chairs upholstered in silk, invite guests to sit and linger. To the right of the foyer is the formal living room and to the left, the imposing library addition.

With its vaulted ceiling and elaborate glazed egg and dart plaster molding, the library is certainly the most dramatic room in the home. The space easily handles two massive brass chandeliers salvaged from a castle in Edinburgh. Originally used with candles, they were converted to gas and finally to electricity. The walls were upholstered in quilted silk, a technique that is so precise that Jenkins calls it an art form. She paid equal attention to the detail in the silk draperies and their enormous tassels that double as tiebacks. The rug, an all-over floral design reminiscent of a William Morris motif, is new, as are the upholstered sofa and chairs. The antique mantel made from many different types of wood was purchased at The Brass Knob in Adams Morgan. Jenkins loves the grand manner of its burled posts.

In the formal living room, Jenkins also upholstered the walls, this time in a Pindler & Pindler silk satin. The designer was able to use most of her clients" existing furniture, including the French cabinets, explaining, “I rearranged the room and put collections together for the accessories. It was more taking their things and putting them together in a different way.” The draperies were also part of the room"s previous incarnation, although Jenkins had them restyled.

The living room leads into the music room, where the walls are painted a deep cranberry. Once a sleeping porch, the space is now dominated by a Steinway piano and two portraits, one of the wife and one of her daughter. A new Aubusson needlepoint rug, complementary to the one in the adjacent living room, anchors the room. Jenkins decided to forgo her trademark draperies in favor of open windows, affording a view of the back yard.

In the center of the new/old house, literally at its heart, is the updated kitchen. After cooking thousands of meals for their large family in a lackluster kitchen, they now have a six-burner Viking commercial stove, a granite-topped center island and a breakfast room overlooking the pool and patio. The custom cabinets by Rutt were given an antique glaze. “I love glazing,” said Jenkins. “It gives depth you can't get with a plain paint.”

The couple now has plenty of space for their children and grandchildren. They showed off a recent photo of a family wedding with all seven children linked arm in arm with their parents. With the seamless addition to their house, the entire clan finally fits comfortably under one roof.

Washington-based writer Alice Leccese Powers is the editor of the newly released Spain in Mind, a Vintage/Random House book. Photographer Bob Narod is based in Sterling, Virginia

The new professional-grade kitchen boasts a granite-topped island and cabinetry from Rutt that Jenkins had finished in an antique glaze.

The kitchen opens to a terrace overlooking the pool.

With its antique Regency-style fountain, the adjacent patio is a perfect spot for a leisurely al fresco lunch.