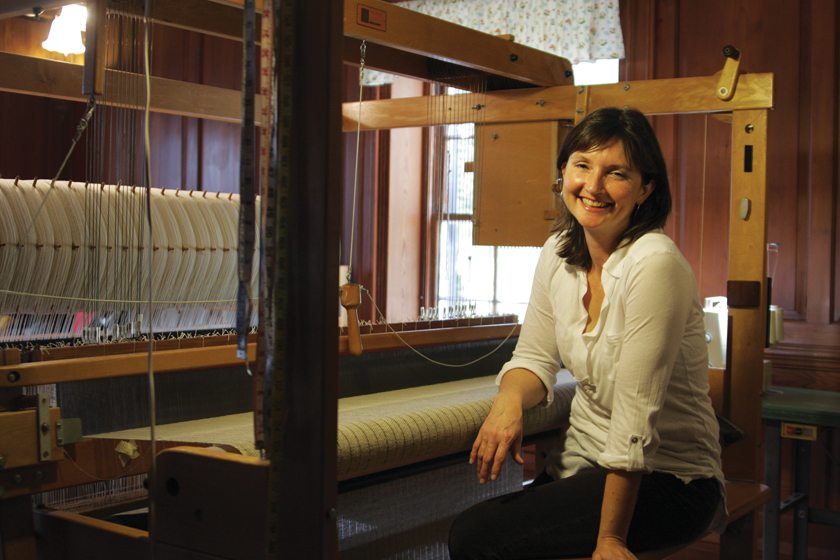 Nordt won a First Time Exhibitor Award at the 2016 Smithsonian Craft Show for her blankets.

A sampling of blankets woven by Nordt.

The yarn is dyed in colors made from dried plants, tree bark and walnut shells.

The wool is woven on one of the looms, guided by hand.

A barn, rebuilt on its original foundation, houses the farm’s 40 sheep.

Dianne Nordt weaves her flock’s wool into blankets in an artful, timeless process

On the historic byway, one enduring farm in some ways mirrors centuries past. Acres of corn and bales of hay line the long drive to its white antebellum house, where a visitor approaches the entrance through massive columns and stairs sweeping up to a broad porch worthy of a movie set.

Owner Dianne Nordt—dressed casually in a jersey shirt, black pants, and flats—opens the door. For six years, she has been weaving ultra-soft blankets by hand, using wool from Merino sheep she raises on the property. She smiles and immediately asks, “Would you like to see how the loom works?”

Leading the way to a nearby room, Nordt sits down at one of two imposing wooden looms and steps on a pedal. Holding a boat-shaped shuttle that carries the yarn, she yanks it across an opening of taut wool threads. The stillness is broken by the clackety-plunk of wood harnesses rising and falling as they capture the thread. “Treadles control the harnesses,” she explains, “and the harnesses control which warps threads go up and down to make the pattern.”

Nordt pulls on a central beam, or beater bar, that moves the newly inserted horizontal thread (weft) down through the vertical strands (warp), which are strung like a harp. She then throws the shuttle device in the opposite direction, repeating the motions. It’s a rhythmic sequence dating back thousands of years.

“The act of weaving is peaceful, repetitive and tedious,” says Nordt. “For some reason, that appeals to me. I like dyeing the wool naturally using plants. I like the challenges that come with the mechanics of a loom. I like having a finished product that I can sell and that’s creative to make. I like all the steps,” she adds with a laugh, “except bookkeeping.”

With her pet collie by her side, Nordt heads out to check on the first part of the process: her 40 sheep. Past a wooden bridge arching over a ravine, the sheep barn was rebuilt of rough-cut oak after a fire four years ago. “I’m just going to put the sheep in the pasture real quick,” Nordt begins, explaining that the grass they eat is supplemented with feed and “all kinds of minerals. I want to be sure the wool quality is really good,” she says. “And if the sheep are healthy, they produce a lot of wool.”

Every year in February, a professional arrives from New England to shear the flock by hand. He completes the task in just four hours. On the barn floor, trash bags are filled with raw fleece that was rejected as too dirty to send to the mill in Michigan, where the wool is washed and spun into yarn.

The usable fleece returns from the mill wound on cones and grouped in natural shades of creamy white, brown, gray and black. “Those colors are the basis of each blanket,” says the weaver. “The palette is very neutral, with vegetable- or plant-dye colors added in as accents.”

The wool is then wound into loose skeins and immersed in dye baths extracted from plants such as blue indigo, orange-red madder root or yellow smartweed, which Nordt finds along the road. Dried leaf matter may be combined with the bark of Osage trees or black walnut shells, also gathered nearby. She strains the liquid through a colander before submerging the wool, which remains in the bath for periods ranging from 20 minutes to overnight, depending on the color. Nordt uses the stove and sinks in the home’s original ground-floor kitchen for this process. “We want to keep it separate from the family kitchen upstairs,” she says.

Once washed, dried and wound again onto cones, the wool—in an ineffable spectrum of roses, corals, and robins-egg blues—sits on shelves in the loom room, ready for use. Nordt favors restrained patterns with just a few stripes. “I feel simplicity shows off the wool best,” she says. The blankets measure 50 by 70 inches for a throw, or 50 by 35 inches for a baby blanket. Two part-time weavers help Nordt complete eight to 10 blankets each week. Over this past summer, her teenage daughter earned extra money as a studio assistant.

Nordt and her husband, an orthopedic surgeon, discovered the 400-acre farm 17 years ago. After months of consideration, they moved there with their three children, trading downtown Richmond for the rural life of Charles City County. For the weaver, it was almost like returning home. She grew up outside Charlottesville, traveling between the farms of both sets of grandparents. “One had an apple orchard, the other raised cattle,” she remembers. “My dad taught horticulture at the high school.”

Attracted to the city, she attended Virginia Commonwealth University in Richmond as a fashion-design major but found that “something about the fashion business didn’t appeal to me. It’s all about disposal and trends.” Through the university’s craft department, she discovered a loom and learned to weave. “By the time I graduated, I knew I wanted to have a sheep farm,” she says. When her dad offered to buy her a car at graduation, she recalls, “I told him I’d rather have a loom; it’s the one I weave on now.”

Though the loom went into storage while her children were small, she never lost sight of her goal. In 2005, the first sheep arrived on the farm. Soon after, she remembers, “I took the kids down to the 17th Street Farmers’ Market to sell yarn.” She began selling blankets online in 2010, and two years ago started exhibiting at craft shows. In April, Nordt won the First Time Exhibitor Award at the 2016 Smithsonian Craft Show.

The family farm includes a small orchard, an old brick silo and a stable with four horses. Two hundred acres are leased to farmers growing crops.

Despite the workload, Nordt conveys an ethereal calm. “I feel like I’m from another time, related to a shepherdess,” she muses. Looking out across the James River from the home’s boxwood garden, she continues, “In this day and age to be a weaver and raise sheep, it’s such a basic thing to do. I like making things with my hands. I like starting from the beginning and doing the process to the end. It all comes from here. It’s so natural and sustainable.”

Writer Tina Coplan is based in Chevy Chase. Dianne Nordt’s blankets are available at Virginia’s Waterford Fair, October 7 to 9 (waterfordfoundation.org/fair); at the Philadelphia Craft Show, November 10 to 13 (pmacraftshow.org); and through nordtfamilyfarm.com.