The kitchen islands welcome multiple cooks. The stools are by Stanley and the glass backsplash tile is by Soli.

The porch is furnished with seating and tables by Kingsley Bate.

Erin Paige Pitts selected wallpaper in a pale-blue stripe and a Vanguard console for the foyer.

A wave motif embellishes millwork in the living area, where sofas are paired with a coffee table by David Edward.

Upper and lower decks and a screened porch overlook the beach.

The Stanley dining room table and chairs, with host chairs by Vanguard, are elegant but durable. 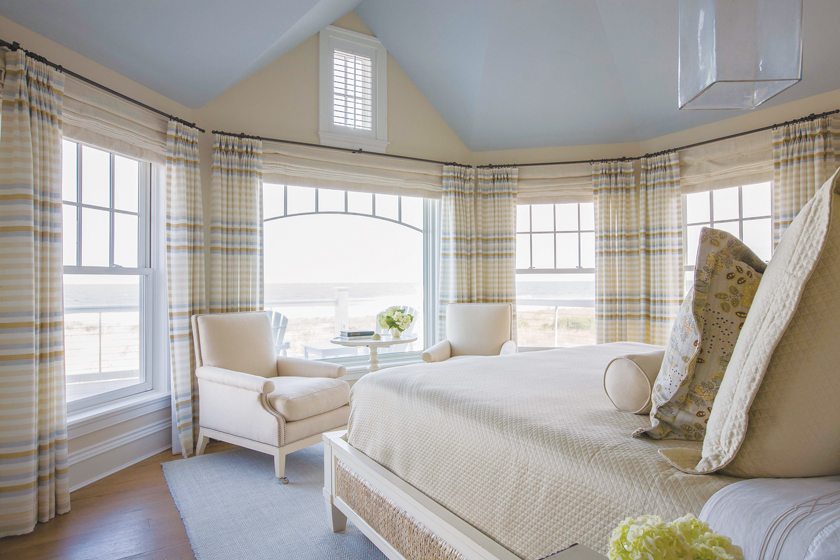 In the master bath, Made Goods mirrors hang between pendants by Arteriors.

Barn doors by Rustica Hardware separate the family room and movie theater on the first floor.

Forbo Marmoleum flooring in the adjacent mudroom sets the right tone for a day at the beach.

The cushion and pillow fabrics are by Perennials and Romo.

A new Bethany retreat embraces the shoreline from the inside out

Portfolio Beach Chic After years of renting houses and descending on relatives in Bethany Beach, Delaware, a Potomac couple finally decided to build a vacation home of their own in that popular beach town, where they could spend entire summers with the doors open to friends and extended family. Maryland designer Erin Paige Pitts and architect Christopher Pattey, frequent collaborators, created a residence that leveraged its beachfront environment to accommodate the owners and their three teenagers in comfort.

“It’s an upside-down house,” Pitts explains, noting that the main living areas and master suite are on the top floor where the views are best, while the kids’ rooms and hangout spaces are below. As for the interior design, she adds, “they wanted the subtlety of the beach without overt references like shells.”

Using a palette of pale blue and beige, Pitts incorporated an understated ocean feel throughout the home. Just inside the front door, she enlisted Baltimore-based Twin Diamond Studios to paint wavy lines of blue and tan on the wall. “You know it’s an oceanfront house, even if at that moment you can’t see the ocean,” the designer says. A blue Venetian plaster treatment on the dining area wall, layered with silver dust, makes the surface dance like water. Pitts asked builder Timothy O’Hare to carve waves into the millwork over the living-room fireplace, so the ocean would be present even after sunset. Meanwhile, the kitchen’s reflective glass-tile backsplash evokes the light and color of the sea. Says Pitts, “The clients gave me a lot of poetic license in terms of the selections.”

While she channeled the outdoors with finishes and fabrics, Pattey (pronounced PAY-tee) designed a floor plan that would frame vistas both large and small. “It’s not only the ocean horizon,” he explains, “but it’s the views up and down the beach—we had to capture those.” He interspersed large windows with smaller ovals and squares, which add character while offering vignettes of the shoreline and neighborhood. He also capped the open living/dining area with large “eyebrow” windows that admit volumes of light—from east to west— into the home’s central core. “I just love natural light. It makes you feel good and it makes space feel good,” he observes. A cupola over the screened porch fills that area with light from above.

On the top floor, soaring ceilings enhance the master bedroom and open living and dining areas, while a coffered ceiling and beams define the kitchen. Pattey also created an enclosed observation deck capping the stair tower on the north side; it offers dramatic, 360-degree views of the Bethany Beach community and the ocean beyond.

The new getaway replaces a mid-century-era, ranch-style home; Pitts salvaged siding from the latter and incorporated it into the new home’s stairwell paneling. She carried the weathered theme through the house, ensuring nothing was too precious. “Durable can be beautiful,” says the designer, who chose an indoor-outdoor upholstery and stress-free furnishings, such as a stone-topped coffee table and a distressed-wood dining table that is forgiving of spills. Even the dining room host chairs are slipcovered for easy clean-up. “No muss, no fuss,” Pitts quips.

The clients first hired Pattey of Becker Morgan Group, which has several offices on the Delmarva Peninsula, because of his expertise with shore-side architecture. “It’s an awareness of the conditions we deal with, weather-wise,” he explains. “You have to build the house as if you’re building a boat.”

And that “boat,” while standing up to moisture and storm surge, also had to be sensitive to its site. Environmental requirements dictated that the foundation couldn’t infringe on the fragile dunes, so Pattey worked with structural engineer Jim Baker to design a steel structure that would cantilever the house beyond the setback line, giving the owners additional square footage and protecting the dunes at the same time. “There’s a big, steel superstructure that holds the house in midair over the dune line,” Pattey says. “The entire first floor can wash away, but the two upper floors will stay intact.”

Whether it’s storming or sunny outside, the home Pitts and Pattey created remains inextricably linked to its surroundings—from the huge screened porch with prime views of the beach to a sunset deck on the west side. “We were trying to make the seamless transition between the interior and the exterior,” Pitts says. “It all just kind of blends with the sand and the sea as you look out.”

The owners of a penthouse in The Darcy in Bethesda wanted a contemporary upgrade. They contacted architect Greg Wiedemann to design a sleek remodel...