The renovated kitchen is light and airy with a 10-foot span of windows above the sink.

The 22-foot island features glass-fronted shelving and plenty of storage behind closed doors. 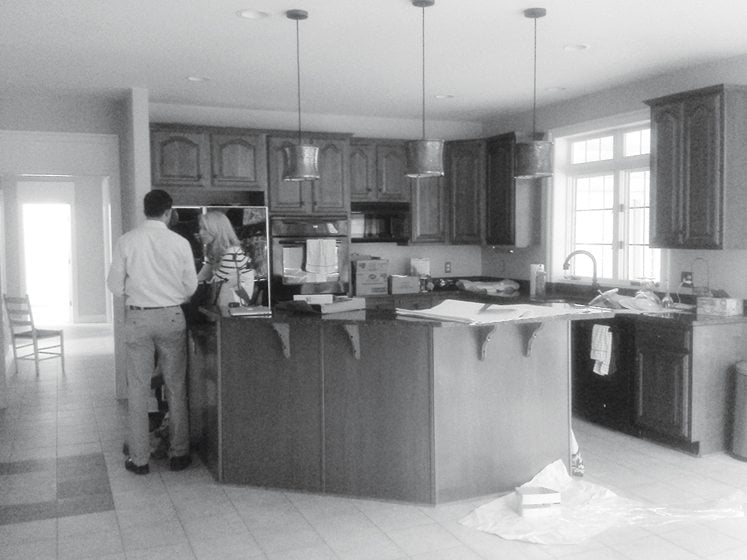 In the family room, a ledger-stone fireplace replaced the original wood one.

The kitchen contains a butler’s pantry with a beverage center.

The renovated mudroom area boasts a built-in unit of cubbies and hooks.

The laundry area features built-ins and a sink.

Function + Flow A physician and his wife purchased a traditional 1995 house in Oakton, Virginia, with big plans to bring its outmoded main floor up to date. On their wish list: a clean-lined kitchen with a large central island; a butler’s pantry; a redesigned mudroom and laundry; and an airy, transitional aesthetic. They also wanted an open floor plan that would create flow between the kitchen and adjacent family room.

Sonny Nazemian of Michael Nash Design, Build & Homes was tapped for the job. After hearing his clients’ objectives, he and his team first set to work on the structural changes that would have to take place. They removed the load-bearing wall that separated the kitchen and family room, replacing it with structural beams but leaving a column, clad in

decorative millwork, that delineates the two spaces. “We borrowed space from an adjacent closet to create the butler’s pantry,” says Nazemian. He also removed a bay window and sliding door in the kitchen to accommodate the new floor plan. “We took over the back wall with a large picture window and flange windows above the sink,” he explains.

Removing the wall between the kitchen and family room meant completely reconfiguring the layout of the kitchen, as that shared wall had held the lion’s share of the cabinetry and appliances. Nazemian instead ran the cabinetry along the back wall, where the bay window and slider had been. With this configuration, “we were able to install a 22-foot-long central island with seating for four,” he says. It also allowed him to eliminate a dedicated breakfast area that the couple didn’t want. Along the former breakfast-area wall, he cited the range flanked by casement windows, a chef-size fridge and a wall of pantry cupboards.

Nazemian was also charged with improving the existing laundry/mudroom space. First, he and his team shifted the washer/dryer location, freeing up additional space for the butler’s pantry. In the mudroom area, a series of traditional closets has been replaced with an attractive and convenient built-in unit boasting hooks, cubbies, and seating on a Fantasy Brown quartzite–topped ledge.

Designers on Nazemian’s team selected wide-plank, engineered-wood floors in a distressed finish for the kitchen and family room, with complementary true-body, porcelain-tile floors in the laundry/mudroom. The driftwood-gray island and white peripheral cabinetry are topped with the same quartzite, while a backsplash of tumbled marble “creates a clean look and a natural feel,” says Nazemian. Professional-grade Thermador appliances make food prep easy, and Kichler glass pendants add a modern touch.

The now-open family room boasts new French doors to the outside deck. To modernize the room’s look, the traditional fireplace mantel has been replaced with a wall of stacked ledger stone. It perfectly reflects the home’s improved look and functionality. The owners are thrilled with the results. “They are excited to entertain in their new kitchen,” Nazemian reports.

Clients with a modern vacation retreat in Bethany Beach turned to Interior Concepts to create a sleek, family-friendly getaway that would be a departure...