The sunroom was remodeled with new windows, insulated flooring and a conferred ceiling.

A new portico above the entry enhances the stone-clad front façade.

The dated kitchen was expanded courtesy of a new rear addition.

Lantern-style pendant lights over the island are from Hinkley Lighting.

A Calacatta Wave marble backsplash above the range creates drama.

The staircase was updated with new balusters and newel posts. 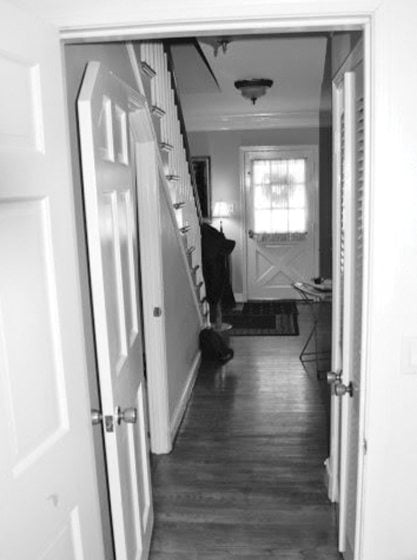 BEFORE: The front hall.

The sunroom opens onto a patio with space for al fresco dining.

Colonial Classic In renovating their classic, stone-fronted colonial residence, Kevin Scallan, a financial systems expert, and his wife Karen sought to preserve rather than radically change the 1963 home’s traditional character. “We wanted to create more space and update the kitchen and bathrooms, but also wanted to keep the original style of the house,” says Karen.

The pair chose Anthony Wilder Design/Build to undertake the project after admiring the firm’s work in magazines. “I like the way they remodel older homes so the new design looks like it has always been there,” Karen explains.

Wilder and his team made incremental changes to both the interior and exterior that quietly meld with the home’s original sensibility, yet go a long way in upgrading its design and livability. They refreshed the façade by adding copper gutters, cleaning the existing slate roof and refinishing and repainting the shutters. A new portico with a pediment creates a gracious, sheltered entranceway, and a sunroom at one end of the house is now an elegant conservatory.

“The existing portico was understated and not scaled appropriately,” recalls architect Sean Mullin. “The new portico blends with the traditional detailing of the home and relates seamlessly to the redesigned exterior of the conservatory.”

In the entry hall, the staircase was reimagined with graceful, lacquered newel posts and tapered balusters. From the foyer, a deep archway now leads into the living room, which was reduced in size by about five feet to make way for a new coat closet and a powder room built into either side of the doorway.

On the opposite side of the foyer, a study was turned into the dining room, with access to the adjoining kitchen. A wall adjacent to the staircase was removed to open access to the basement.

Subtle changes made a dramatic difference, such as the widened doorways between rooms on the main floor that provide more daylight and views through the interior. “We opened the lines of sight and connected the front to the back,” notes principal Anthony Wilder. “Even though the ceilings are eight feet, they feel taller because of the large, cased openings between the rooms.”

Energy-efficient windows and doors enabled the design team to transform the dilapidated sunroom at the side of the house into a bright, glass-enclosed conservatory. “It looked like a bird cage before, scantily built rather than sturdy and weatherproof,” notes Wilder. “Now it is Karen’s sanctuary.” A new coffered ceiling makes it feel taller than the adjacent study and insulated floors keep it cozy year-round.

Interior designer Keira St. Claire says she brought “a sense of calm to the sunroom through a lot of white and green accents.” The comfortable seating was part of an overall choice of simple, classic furnishings and fixtures that “reflect the homeowners’ traditional aesthetic and exemplify a timeless style.”

Details set the new interiors apart. For example, the piping on the sofa upholstery repeats the shape of the moldings on the wainscoting, unifying the furniture and architecture.

One of the most dramatic transformations was the kitchen, located at the back of the house. To enlarge the dated, narrow space, Wilder created a one-story addition that extends six feet from the rear, clad in brick to match the original exterior wall. The extra space accommodates a dining area and a walk-in pantry.

“The kitchen used to be dark and closed-off from the rest of the house,” says kitchen designer Shannon Kadwell, who reconfigured the space. “Now it is open and airy with a large, arched window over the sink. It has a traditional feeling in keeping with the house.”

Framing the island next to the commercial-style range are two columns, only one of them structural. The boldly figured marble countertops and backsplash add dynamic pattern; the backsplash is pieced to look like one marble slab.

The two-car garage was enlarged to accommodate another bay, now used by the homeowners for bike storage, and a mudroom tucked in between the kitchen and garage. While most of the upgrades were concentrated on the main level, the second-floor bathrooms now boast new fixtures and finishes in streamlined style.

Only the youngest of the Scallans’ three daughters still live at home and while her parents will become empty nesters in a few years, they have no intention of downsizing. “We use more of the rooms now,” says Karen Scallan. “The house is more lived-in than it ever was.”

How do you decide when to renovate rather than tear down?
Anthony Wilder: The first consideration is budget, as a renovation is less expensive than a custom home. Before we make recommendations, we learn each client’s dreams, habits, preferences, and personal stories. We look at practical and aesthetic factors of the home, neighborhood and client’s goals.

How do you best preserve a home’s character while updating interiors for today?
AW: Our design solutions are classic and timeless, not trendy. They honor and complement the existing home so that the new work is seamless and elevates the original design. We take into account the client’s emotional attachment to the home.

What are some easy ways of modernizing a kitchen?
AW: Windows can be added or enlarged, wall and cabinet colors can be lightened and doorways opened to adjacent living spaces.

What factors most impact a bathroom renovation?
AW: Color, size, and scale need to work in concert. Clean lines, a skylight or a window if possible, and ventilation are elements that we consider.

In a verdant patch of Fauquier County, life gallops along at the speed of a polo pony. So it seems incongruous that the clock...