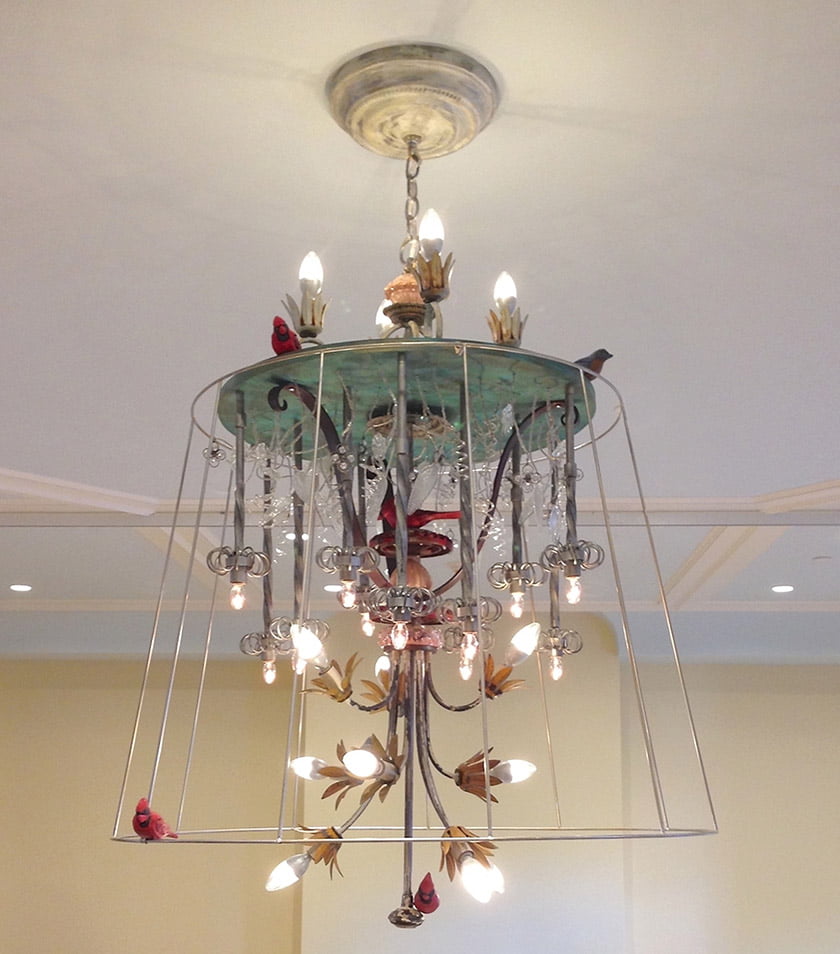 A sprightly chandelier was designed for The Valentine museum shop.

Newly fabricated, painted aluminum in the form of a modern flower.

One recent fixture was fabricated from repurposed brass bowls.

Wendy Umanoff’s first big lighting commission was a dream assignment. Asked to design a chandelier for The Valentine museum store in Richmond, she searched through the museum’s archives. Among historical objects donated by local families, Umanoff gravitated toward the toys. “I wanted it to be playful, an inviting focus for people walking in,” she recalls.

The chandelier she designed in 2014 continues to charm. Like a lighthearted scaffold, it furnishes a perch for painted-wood cardinals—alighting on top, surrounded by swirls of crystal and seen through a metal frame resembling a wire cage. The piece hints at Umanoff’s characteristic style with its blend of vintage and new parts and pieces assembled as in an airy, illuminated sculpture. “My sensibility is eclectic,” says the designer. “I love combining reclaimed and industrial pieces with modern.”

In The Valentine’s whimsical chandelier, repurposed valve handles circle the central post like rings tossed around a stake. The designer duplicated 1940s bartending tools; their twisted-metal rods with spring attachments reminded her of pull toys. Typical of Umanoff’s custom designs, all parts come together in harmony to suit the destination.

“Richmond is so rich in historical buildings and history,” says the designer, describing how the chandelier’s re-use of salvaged materials “speaks about the city’s renewal, and how much it continues to change.”

A resident of Richmond for 20 years, Umanoff refers to its “amazing resources,” including the skilled artisans who fabricate her lighting. To create her visions, she collaborates with local metalsmiths and a blacksmith, woodworkers, powder-coaters and glassblowers. Recently, she approached fine artists to paint small sconces made of reclaimed parts for a project to benefit local nonprofits during the pandemic.

Umanoff also uses a professional picker who gathers salvaged finds that inspire many of her one-of-a-kind and limited-edition designs. She has imaginatively repurposed all kinds of industrial and other materials—from auto rotors that serve as pendants to real birds’ nests preserved and transformed into chandeliers. One current project will refashion a wooden yoke used to harness farm animals as a fixture to be suspended above a client’s kitchen island. “It’s going to be so much fun,” she says.

Having one foot in the past comes naturally to Umanoff. Her father, Arthur Umanoff, was a noted mid-century industrial designer whose furniture designs have recently been rediscovered. Growing up in the modernist, wood-and-glass house he conceived in Westchester County, New York, she remembers her father sketching on tablecloths during dinner, and making her own lighting sketches while she visited his office. “Now I’m always drawing to figure out the best way to build and hang lighting,” she notes.

Umanoff made the circuit to lighting almost by chance. After majoring in sculpture at Parsons School of Design, she worked for many years styling store displays and photography shoots in New York and California. Moving to Richmond after marrying, she styled photos and wrote a column about repurposing everyday objects for the city’s R Home magazine. For one column, she recycled bed springs and pulleys into lighting. Later displayed at Strawberry Fields Flowers & Finds, the fixtures were noticed by buyers from Shades of Light, a largely online lighting source based in Richmond. That happened 10 years ago; Umanoff has been designing for that purveyor ever since.

To display her wares and, as she says, “begin conversations with clients,” she shares space in Richmond’s historic Scott’s Addition with several craftspeople, including the proprietor of Phoenix Handcraft, who forged The Valentine shop chandelier.

Umanoff’s own loft apartment, a living and work space, is also located in a converted industrial building. There, at an old mahogany desk, she enjoys doing her own shop drawings by hand. New and vintage furnishings comfortably comingle, among them an occasional table designed by her father in the 1960s and a bank of mid-century metal cabinets from his office.

“I love the open space and moving things around within it,” says Umanoff, who recently replaced a pair of black pendants made from double pulleys in her home. “Maybe it’s a reaction to covid, but I was ready for something softer and more playful.”

In place of those fixtures, she has hung oversized versions of abstracted flowers, their white petals splayed out as in an overhead fan. “I think they create a lot more dimension and whimsy,” Umanoff says of the new design, based on a tiny incense holder she found while cleaning out a drawer. As she adds with a chuckle, “Where inspiration will come from, you never know.”

When the Annapolis Yacht Club—long a fixture on Spa Creek by the bridge to historic Eastport—was gutted by fire in 2015, architect Leo Wilson,...