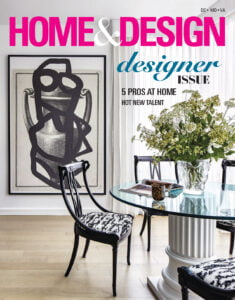 Soft Power - Washington’s mayor granted several television interviews from her home in Colonial Village in 2018, all in the wake of adopting her baby daughter, Miranda Elizabeth.

Each time, she used her living room’s blush walls and contemporary furnishings as a backdrop to discuss the importance of balancing work and motherhood. “I love my home, I love my neighborhood and I love that I’ve made my house really work well for my daughter and me,” Muriel Bowser says of the renovation she orchestrated the year before Miranda arrived. Since then, she’s welcomed a steady stream of family, friends and guests through the main level, which includes an open living/dining room and an adjacent TV room.

Bowser credits DC designer Trystin Kier Francis with remaking these spaces, replacing what she calls a “hodgepodge” of furniture she’d collected over the years. And because she uses this floor in her official capacity as mayor, she needed the area to work hard and wear well. “I’ve probably had over a thousand people at various events,” says Bowser, who requested plenty of seating options. “I also have elderly parents so I had to have comfortable seating for them.”

Francis met the mayor after she admired custom cabinets he’d designed for Lee’s Flower Shop on U Street downtown. “They were made on-site by a local cabinetmaker who’s from Grenada—the simplest little cabinets ever, but she loved them,” says the designer, who internalized these details as he went about fashioning Bowser’s home with clean lines and restrained style.

The mayor had already painted her walls in Sherwin Williams’ Angora, so Francis worked within that scheme. Another starting point was Bowser’s eclectic and colorful art collection, including a historic print depicting a colonial-era Caribbean plantation—a scene that reminded Francis of Martinique, where his grandmother grew up. For Bowser’s part, the print has sentimental value. “I bought it for my very first apartment, and I’ve just taken it with me every place,” she says.

Adds Francis, “It’s so whimsical. The fact that she had something like that in her home really spoke to her appreciation for culture. I needed it to be front and center, representing who she is as mayor of a city comprised of people from so many different nations.”

Muriel Bowser grew up in DC’s North Michigan Park, where her parents still live. After attending Chatham College in Pittsburgh and earning a master’s in public policy at American University, she was elected to the city council in 2007, filling Adrian Fenty’s seat when he became mayor. In 2015, Bowser was elected mayor herself; she became Washington’s first woman to gain a second mayoral term in 2018.

As she was completing her first term, Bowser gave Francis just 29 days to finish the makeover of her home, in time for an event she was hosting for former classmates in a leadership program. “It was like a race against time, and could have been a great episode on HGTV,” Francis says. The timeline meant he had to rely on available furnishings from online retailers. He honed in on neutral, contemporary pieces with plush, patterned rugs in feminine colors and fluffy, fringed throw pillows for texture and personality.

To impart character, he painted a vintage bar cabinet black—a strong juxtaposition against chunky brass handles—and transformed Bowser’s existing brown credenza with a coat of purple paint and gold-painted hardware. “It’s the star when you walk in; it gives the room sparkle,” he says. “Purple and gold represent royalty. I wanted it to be really rich-looking.”

The design also includes reminders of friends and constituents. A colorful tea set she acquired on a trip to the Far East enjoys pride of place, and she discovered one of her favorite artworks, a drawing of two dancers, at DC jazz singer Esther Williams’ former thrift shop in 16th Street Heights. “It was a find, a diamond in the rough. I really like that a lot,” she says. Francis reframed the piece, which now makes a bold statement above a console he painted black for contrast.

Bowser admits she didn’t have specific requirements for the redesign, giving Francis free rein to make decisions. “She entrusted me to make her home beautiful,” he recalls—so he turned to another powerful woman for inspiration, channeling the curves and geometry of the late architect Zaha Hadid’s work. He felt Hadid’s presence in the angles of a metal accent chair, the notched round base of the dining table and swooping wood frames of the chairs that surround it.

Between the mayor’s art collection and the sculptural furnishings that fill these spaces, Francis says the project now befits a public figure whose home is both suitably official and comfortably intimate. “This space is 100 percent Muriel Bowser,” he reflects. “It’s a modern space for a modern mayor who makes big decisions, but it’s also got a Calgon effect—as in, ‘Just take me away after a long day.’”