A walnut table and low-backed, velvet-covered chairs from Modway anchor the dining room.

The antique Chinese chest in the dining room takes center stage. A small butler’s pantry lies to the right of the chest.

The elegant living room faces a screened porch, so Twomey selected off-white upholstery to counteract the lack of natural light. 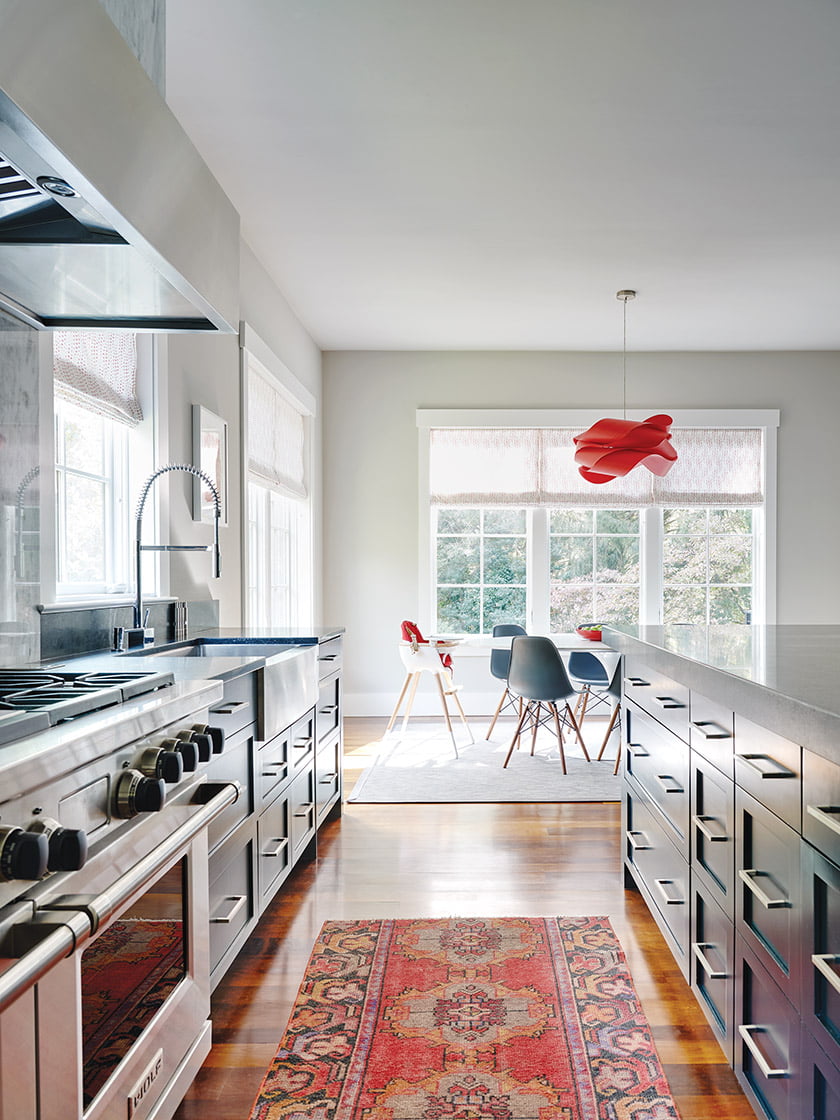 In the kitchen, a Saarinen Tulip Table and Eames chairs were sourced at Design Within Reach.

A fireplace wall with integrated cabinetry creates a focal point in the living room.

The red walls in the kids’ playroom pick up the bright hue of the stools and light fixture in the kitchen.

A Vanguard bedstead and nightstands anchor the master bedroom. 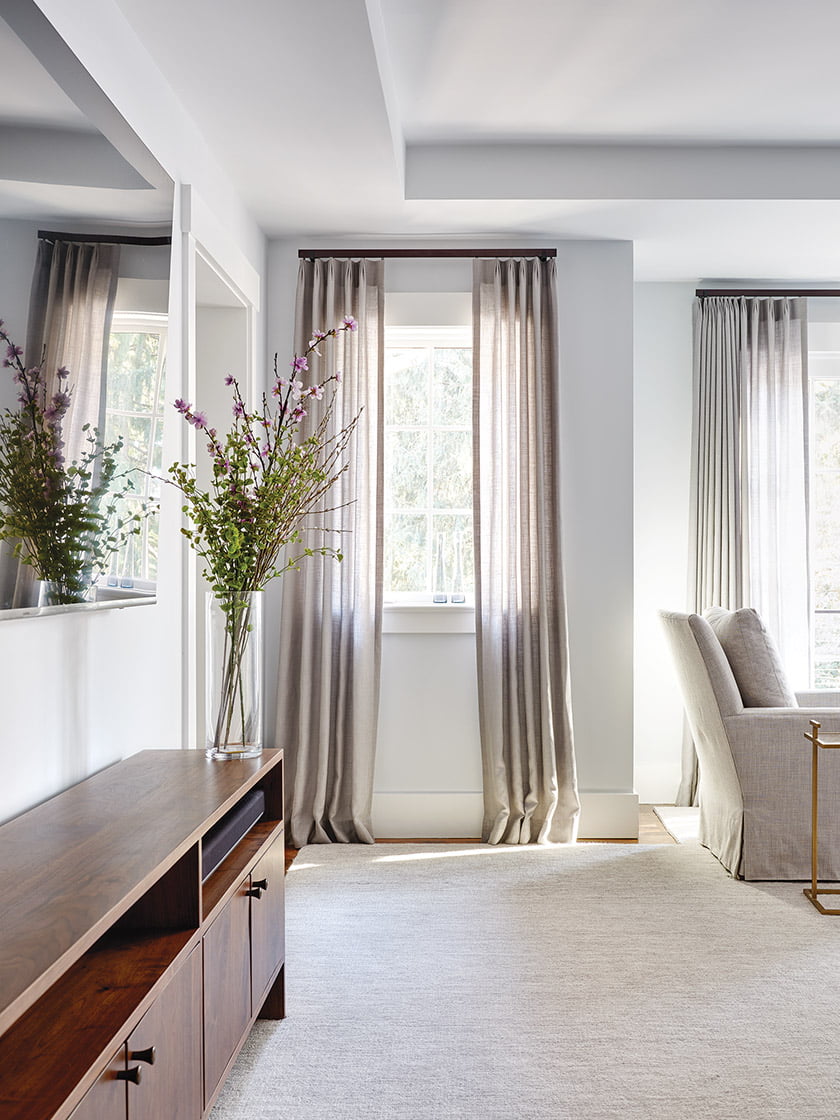 Wallpaper from Scion was the jumping-off point for one son’s bedroom; it also clads the desk.

After years of putting up with a substantial outside-the-Beltway commute, Dia and Rudy Bejarano were ready for a change. Leaving behind a traditional house in Rockville’s sleepy Derwood neighborhood, the couple began looking at dwellings closer to DC. This time, they were interested in a home with a modern, European sensibility; he is Bolivian and she is from Hungary. “We thought we might buy a lot and build, but then we saw this house and it was perfect for our needs,” Dia recalls.

The previous owners had purchased the builder-grade abode in Maryland’s Cabin John community while it was under construction in 2015, customized it with clean lines, contemporary features and an open main-floor plan—then ended up moving within a year or so of its completion. With three kids aged six, five and three, the Bejaranos—who both work for a tax processor (he is a COO and she’s an analyst)—were drawn to the home’s roomy, 4,500-square-foot size as well as its streamlined style.

The couple hired Nancy Twomey of Finnian’s Moon Interiors to appoint their new residence with a modern aesthetic to match the interior architecture. “We told her we wanted clean-lined spaces with ‘spice,’” recounts Dia, laughing. “We used that word a lot.” She mentions the red-leather counter stools, which pop in the monochromatic kitchen, as an example of how the designer opted to spice things up.

In addition to the kitchen’s sleek charcoal cabinetry and marble-slab backsplash, modern architectural elements in the other main-floor spaces offered Twomey her style cues. An open, industrial-style steel staircase grounds the front hall and a wall in the living room incorporates a double-sided gas fireplace with flat-fronted, light-wood cabinetry and an integrated mantel. A small, red-painted adjoining lounge area shares the fireplace and offers convenient play space where the kids can be under supervision without being underfoot. A simple coffered ceiling delineates the living room, while the adjacent dining room boasts a similarly unadorned tray ceiling.

Against this spare backdrop, Twomey introduced a quiet palette of gray and blue that plays off the colors of the kitchen, with sprinklings of gold and red. “We kept the same threads of color throughout,” she explains. “The red accents we added were dictated by a Link Suspension light fixture in the kitchen and the color in the playroom, both of which were already there when my clients moved in. Along with the kitchen stools, which I had upholstered and powder-coated in red, they create a visual balance between the spaces.”

When it came to furniture, the designer started from scratch. She eschewed stark, contemporary pieces “because they have little kids and were looking for something softer,” she observes. “It was a matter of keeping the aesthetic modern but softening the edges.” Comfortable Wesley Hall sofas and custom TCS Designs chairs beckon in the living room while rounded pieces such as Modway dining chairs, upholstered in patterned Romo velvet and paired with a walnut Modway table, impart warmth. Twomey added vintage pieces, such as an antique Chinese chest in the dining room, for layering and interest.

Upstairs, the master suite, guest room and three children’s rooms all needed work. Twomey painted the master bedroom a pale, restful blue that conveys the sense of an oasis from hectic family life, anchoring it with furniture from Vanguard and a plush, neutral carpet. Her firm, Finnian’s Moon, is known for its stylish, creative children’s décor—and it was no effort, says the designer, to conjure pretty and playful rooms for each child. “Kids’ rooms just come to me,” she marvels. “I really like picking out all that cute stuff.”

With a spacious finished basement and a recently added pool and patio, the Bejaranos’ home feels complete. A bonus, notes Dia, has been getting to know the Cabin John community, which was new to the couple before their move. “We feel blessed to have found this spot and this house,” she says, “and to have had Nancy’s help in making it great.”

How do you create a collected look when you’re buying everything at once?
This house already felt layered because of the architectural elements, and vintage pieces here and there added to the effect. I reupholster antiques and look for vintage rugs online; I like the trend of putting real rugs in the kitchen.

How did you conceive the kids’ rooms?
Each room started with a wallpaper accent wall and I pulled all the colors I used in the room from that. For practicality, I kept the other walls neutral and saved the bright colors for lamps and accessories. I covered the desks in the boys’ rooms in the same paper as the walls.

What’s your philosophy on color and pattern?
I’m not a color or pattern person, but I’ll go bold if the context is right. In that case, it should feel interesting as opposed to bold—like the Romo fabric on the dining room chairs.

Artful illumination is critical to any kitchen design, says Meghan Browne of Jennifer Gilmer Kitchen & Bath. Below are her criteria for the perfect...